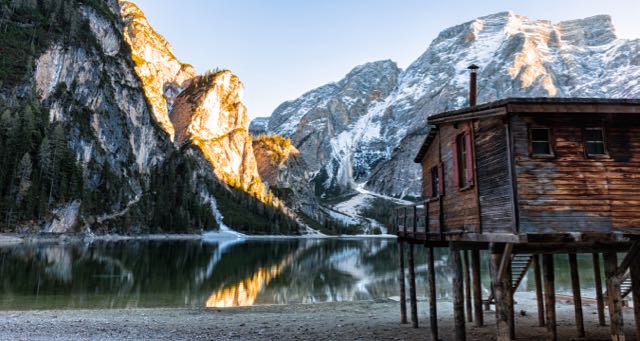 Cool mountain water surrounds me. The momentum of my dive carries me toward the inflatable trampoline anchored at the swimming area’s far area. Frankie follows me. We climb out of the water and onto it. But when he climbs further out onto an arm of the trampoline, I jump on the base of it. He ricochets into the air and back into the water.

We paddle out toward the center of the reservoir. Madonna rises behind the child-friendly beach opposite the waterfront. Clouds rolling in begin to obscure the summit.

We look at Mountain Laurels 15. It’s dated pin-stripe wallpaper clashes the equally unfashionable, upholstered couches. A wood deck offers a view of trees. The whole unit is small, even smaller than Sycamore 56, our home one-bedroom. Smuggs has not offered us the comparable condo to the Tamaracks that we hoped for.

But we still take it.

It’s not until Mira says, “I feel defeated,” that the reality sets in. We’re the ones that just gave up the Tamaracks condo for which we had saved up our points. The neighbors that wouldn’t stop their children from pounding the floor all night still get to stay in their own.

packing up a neighbor’s first conversation as we leave

We settle into Mountain Laurels. I join Frank at the condo complex’s pool. It’s small and shallow, with saltwater and without slides or other aquatic amusements. However, it does have an inflatable made up of different sections. Sue, a big woman from Tennessee by way of Iowa, explains how Frankie put them together.

“He reminds me of my own son when he was his age. He’s also an only child,” She adds.

Mira comes down, followed by Sue’s husband, John. We talk until we’re the only ones left at the pool.

We socialized more with Mountain Laurel guests in one afternoon than we did with Tamaracks guests in one-and-a-half weeks.

We call it an early night. Guests arrive by 11:00PM. Doors slam several times as they bring in luggage. Then more of their party arrive at 1:00 in the morning: chatter, followed by closing car doors and more slamming of the main door.