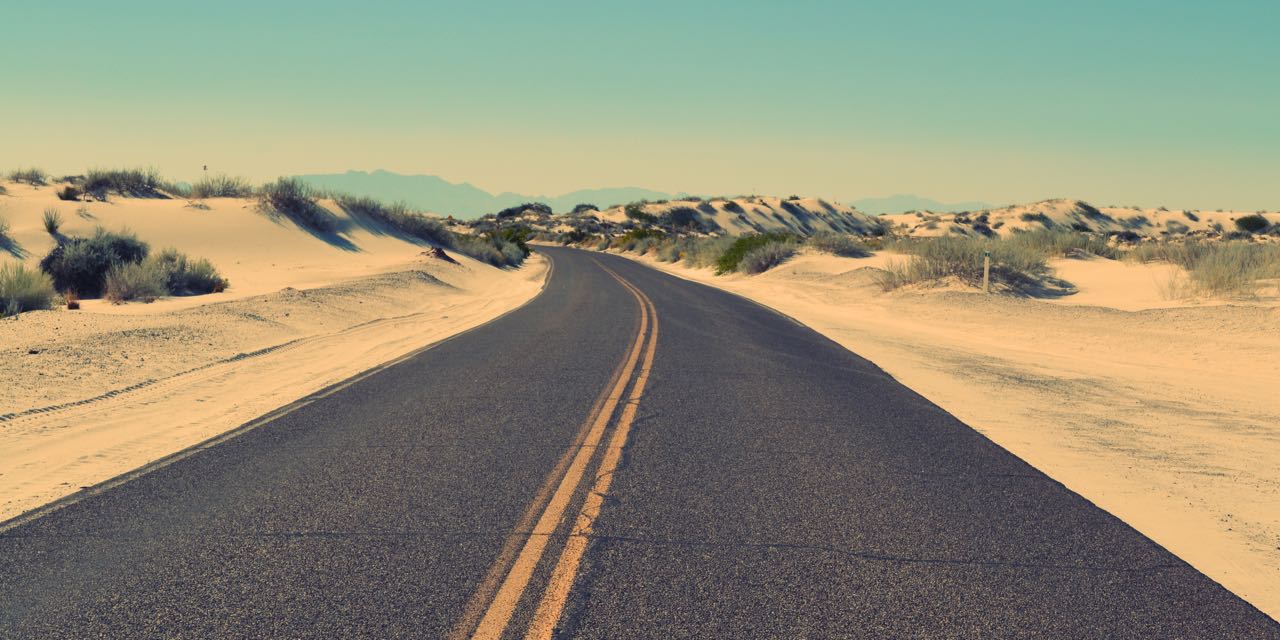 Last time I was here I was with my closest friends in a band, deciding on a whim to head southwest on this exit to find Marfa, Texas. In a van much like the one I happened to see on that very exit, we proceeded to drift off toward Mexico and into the dying light of day as it turned blue to red and into black the same as the life of a coal on fire. The gig remains largely undocumented and kept close like a secret, made sour by its sharing.

I’m sure it was a fine performance, whatever songs they were, and we played at a nice little place, and somebody followed our facebook page. But now these memories have been parted and realigned, once coarsely ground and full of detail, now a fine powder and smeared lazily with time, outweighed by all things intangible. Like the warmth of complete strangers taking us in from the desert road. The night sky of lights blinking and unexplained, packed with stars and other beings. And the feeling of finally coming home, to a place none of us–would ever–want to live.

The hand in the sky guiding us tightened, like a guardian leading us across an unfamiliar and dangerous street, ensuring our safe arrival.

They say the sky here is unique, renowned, beauteous, rare; made immaculate by particles of dust suspended in the sphere between here and the ozone — gold and pink and yellow with blue tails on the fringes, shining like a holy shrine from the west in the stretched-out horizon ahead. The dust is kicked up by trains and hot wind over dunes of sand. They multiply like the infinity of two mirrors facing one another. Haze fades the mountains out into distinctly different shades of block color categorized by their distance to us. Blue and brown homogenous mono-colored cutouts of mountain ridge, wide and high up atmospheres dampen the field around us, like the presence of ghosts.

Arizona. What kind of emptiness is this?

The silent cathedral. The lone butterfly. The battle and blood soaked ruin wrinkled up and dried out as sacrifice to the gods of the unstoppable sun.

We’ll probably never find that out.

Whatever laid them into the earth, quietly, raises them again.

(going west over the long plateau)

Same dirt and the same sky now without color, bland and bloodless. Grey dusted rock and gravel on the side of the road and no more rest stop for miles and miles. And if you had to pull over there was nothing but a cactus to use as your personal fire hydrant by which to pretend that there was some kind of stall or landmark to retain your dignity by. Eventually we get to coastland— rolling brown hills dried up and propped with abandoned wind mills silent and motionless. You can feel an ocean on the other side of the horizon.

I can believe it now.

The smell of salt. The mineral caked earth.

There really was a mad rush for gold. People leaving whatever they had going to get something new going. Desperate people. Crazy people. Dreamers. People crawling all day in mud creek and wet earth to pull up a fleck of fortune for themselves. Delving in secret waters. Looking for hope and won’t stop because they have too much hope in ’em. Maybe most squandered it all away before the future they dreamed of could ever be realized. And so fortune is as relative as is time and now we are in the past and present and future all in the same moment. I suppose it’s up who you’re asking.

I look around and I can see the grass start to blow in the offshore breeze, turning the hills into breathing, shimmering sheets of gold. And in my mind I’m out there. Hands brushed over the tops of the fields. Scanning the vast panorama. Little diamonds winking at me every now and then.