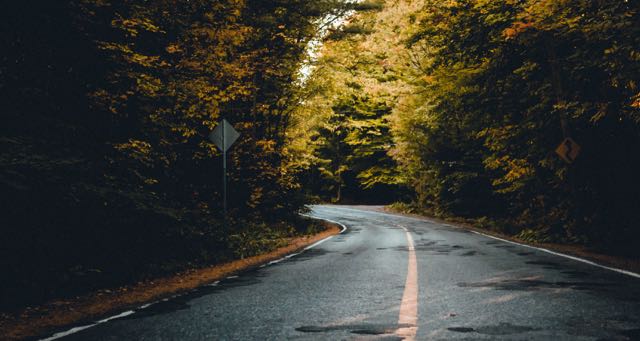 I awake at five. Toss and turn until seven. Then give up and center on the deck for the last time at Smuggs this season. Birdsongs, so different and yet similar, to home; the hum of AC units: they fill the air. The sky brightens, though it’s still quite cool.

We’ll soon depart. I feel the usual sadness arise at the though.

We’re packed before ten. One last look off the deck, and we leave Mountain Laurel 15. Drive down Mountain View, past the Willows and Trailside Executives, the original condo communities of the resort, and Courtside Pool to the Visitor’s Center. Kim smiles pleasantly as she hands us our zero-balance sheet. One last glance at the Welcome Sign, the Smuggler’s Notch Sign, the Village Lodge and Meeting House: then, we drive out and away.

Later, on the ferry to Plattsburg, I watch Grand Isle—our last stop in Vermont—fade from view.

The cavernous sides of Ausable Chasm in the Adirondacks rise over thirty stories above us. Fissures and stone formations, with names like elephant’s head and Cathedral, emerge from either side of our trail. The path continues.

upside-down evergreens on the cliff face bathe in the sun

We take Frankie’s photo with the rainbow falls in the background. A sign states that it’s the most photographed waterfall in the Adirondacks, a miniature Niagara pouring into the “Grand Canyon of the East.”

I then take a photo of Mira and Frankie together with the Ausable River in the background. Its roar echoes of the cliff walls.

visitors boarding rafts the road of a rushing cascade

A walk through the big dry chasm. A shuttle ride back. Lunch. The Runaway Railroad museum visit. Then the drive south, leaving first the Adirondacks, then the Capital, and finally the Catskills behind.

A full moon over the Hudson Highlands welcomes us home