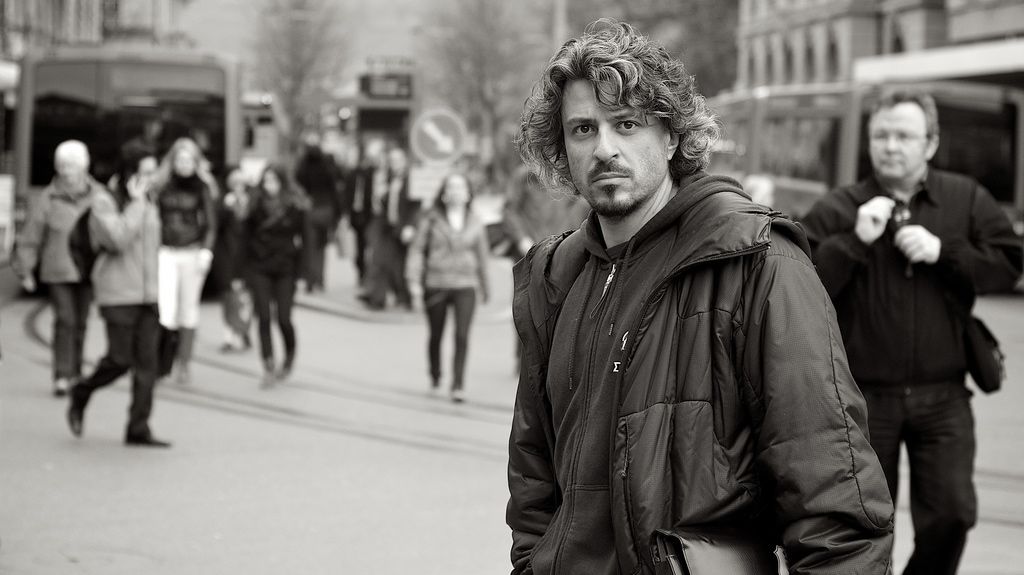 Henry’s calm outward demeanour was achieved at a terrible price. Whenever he felt frustration or rage he would bite his tongue, and send the ugly feelings back from whence they came. Denied expression, the part of Henry that felt the ugly feelings splintered off from his mainstream personality and took the form of a fierce, dissolute beast who walked upright like a man but had the skin and eyes of a reptile, and who insisted on being called Lachlan. It took a long time for Lachlan to manifest himself fully. At first he was a physical feeling that Henry experienced from time to time. Sometimes, at night, when he lay awake next to Nina, thinking about the need to move into a bigger flat to accommodate their unborn child, random groups of muscles would clench, and become as hard as concrete. On the way to work, as he sat on the bus wondering if the terms into which he had entered into business with his partner Alex were entirely fair, he would sometimes feel dreadfully claustrophobic. His GP, Roger, who was also a long term friend from way back, advised him that he was feeling the symptoms of long term stress, and should seriously think about a holiday. Nina said much the same thing. No one told him that these were the first stirrings of a ravening demon.

Henry’s first glimpse of Lachlan was in the garden shed. He liked to relax in the evenings by retreating to the shed in their tiny concrete garden, smoking a joint, and working on the construction of a sixteenth century Spanish galleon from match sticks. One evening, he was lost in the intricacies of the poop deck when from behind him there was a rustle and a belch, a hiss and a scraping. When he turned to see what was up he saw red light flickering in the clutter pile at the back of the shed, and something that looked like an open orifice filled with rows of sharp metal teeth. Henry fled the shed and made his way into the flat and into the bedroom were Nina greeted him with that sardonic scepticism she reserved for when she knew he had been on the puff. She murmured something about wishing he’d stick around one evening after dinner for a proper chat instead of disappearing off to the shed to get stoned, and advised that he sprinkle rodent poison on the clutter pile, or even better tidy it all away.

The next sighting was about ten days later. Henry was in the pub unburdening himself to Roger about his business and financial worries. He didn’t know when his business venture with Alex was going to start paying dividends, and in the meantime it was whittling down the inheritance that Nina and he had planned to use to buy a house. When Roger suggested that Alex should stop doing freelance work and concentrate on building the business Henry got up to take a pee. As he was emerging from the gents someone pushed against him from the side. He smelled foul festering air. A fist grasped his collar and a deep guttural voice full of hate rasped in his ear.

He was being menaced by a scruffily dressed middle aged man whose face was hidden in a hooded top whom he had pushed passed on his way to the toilet, but had hardly noticed. Two of the bar staff came to his aid, pulling the man away and shouting that they were sick of telling him not to come into the pub. Upset and shaking, he returned to the table where Roger sat, looking surprised and faintly amused. It transpired that his assailant was a notorious local eccentric nuisance, a middle aged man with a chaotic life called Lachlan. The rodent remark had hit a nerve with Henry though, so he told Roger about the shed, and the noises, the red lights and the teeth. Roger advised him to get out more and stop smoking so much dope.

Later that night, Henry found himself back in the shed, deeply involved in his second attempt to assemble the mizzen mast. He noticed that it was dark outside, and then realised he couldn’t remember what time he had got home from the pub. He was having difficulty focussing, and his hands were a mess of glue and matchsticks. Suddenly, he was plunged into darkness, and was enveloped by the smell of rotting meat. He felt something sharp and scaly probe the back of his neck, and spun round on his stool, his arms flailing. Between him and the door was a silhouetted shape. He could make out a stooped figure with a hooded top. A rasping voice spat the words:

Henry woke abruptly and sat bolt upright in bed, his pulse racing. His mouth was dry and his head ached, the symptoms of a hangover well under way. The room was filled with pale dawn light. Nina shuffled a little beside him, and then continued to breathe peacefully.

He decided to follow Rogers advice, and ceased his hash smoking immediately. It was surprisingly easy. He had a bit of trouble getting to sleep, but in the mornings when he woke his head was clear. He took up jogging as a stress relief tactic, and for a few days he felt more energetic and positive. When Roger organised a paint balling day signed up for it.

He still continued to experience odd disturbances. When he was shaving one morning he thought he caught a glimpse of a dark hooded figure in the reflection of the mirror. It was actually the reflection of a towel hanging from a hook on the back of the door. A few days later he was travelling by train to a meeting in Dorset when the train went into a tunnel and amid the roar and clatter of the train he heard the deep guttural voice that had assailed him in the pub utter the words: “Feeble fool, wasting borrowed time.” And in the morning on the Northern line he twice caught a whiff of the smell of his hooded assailant. He had the feeling of being stalked by a malevolent oppressor. It helped to give the oppressor a name, and ‘Lachlan’ was a natural choice, as the manifestations had started around the time of his encounter in the pub with Lachlan the vagrant. He generally felt burnt out and on-edge, and looked forward to the paint balling afternoon as something that would help him let off steam and relieve the pressures of work with some normal, harmless fun.