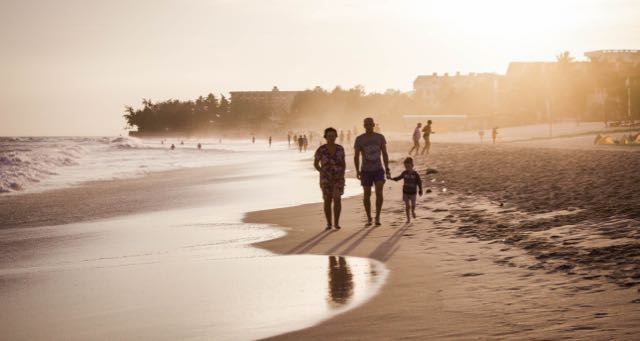 The water covers our ankles, and it’s still cold after a summer’s worth of sun. A few steps in, and waves crash against our knees. The undertow pulls and pulls. Frankie soon lets the riptides carry him back to the beach.

surf and turf sunlight at our back

We all walk east on the tideline to escape smokers seated nearby. The bathers that huddle waist-high in the water yield to sparse sunbathers and sea-fishing rods erect in the sand, their lines out in the surf. We retreat to our right after Frankie and Mira spot irrefutable evidence that we’ve approached a nude beach.

wet sand so many misadventures

After our goodbyes to Robert Moses, the long beach-traffic home, and a festival of leftovers, Mom joins us with pastries. We sing “happy birthday” to Mira with two lit candles in a Napoleon.

crash of the surf from sea breeze to her gentle breath

We pause for lunch at the Torne Valley lookout. Frankie points out New York, Jersey City, and Newark—flat outlines on the horizon under a hazy sky.

We’ll soon follow the Seven Hills trail over at least two of them. We’ll glimpse western New York and eastern New Jersey before a forested descent to the familiar Pine Meadow Trail, the path back to our Camry.

all along the trail