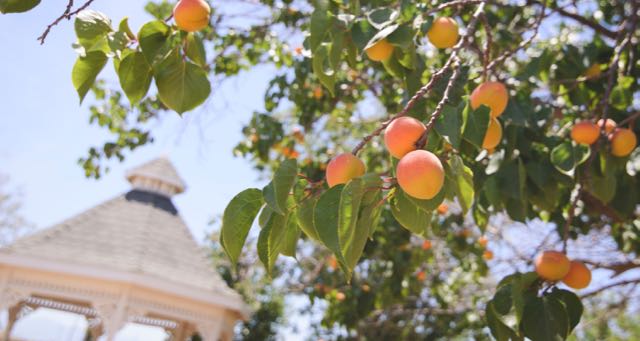 We pass the peach and apple groves as we make our way across the Boscobel estate. Locate an ideal spot upon which to picnic on which on the great lawn overlooking the Hudson, its nearby estuary, and West Point. Soon, we’re devouring cheddar, goat and dill cheese spread on crackers, wheat thins, and Italian bread. Not to mention the sausage and bologna—and the Carlos Rossi Mira and I drink with it all.

rippling water
my arms around her waist
before sunset

“Two Gentlemen from Verona” entertains as advertised. The fool with crab the dog steals the show, with his shoe-grabbing escapades during the first Act. Frankie quotes the play like it’s a favorite episode of the “Big Bang Theory”

raucous laughter
we follow the lit path
back too soon

The Ferry docks at Governor’s Island. An overcast sky keeps the day cool. Frankie leads us first to Fort Jay and then Nolan Park. Adelia would like to live in the Commandant’s house. The rest of the Federal style homes offer art exhibits that attract little interest from her.

We enter the Parade Ground. Frankie disappears on the figment Tree-house-as-sculpture doubling as a playground. A quick walk past the Brooklyn Pier and part of Colonial Road brings us to a new park—where Frankie disappears into another amusement. We then pass through Hammock grove, where not even one is free, and then make our way to an open end of the Promenade overlooking New York Harbor. There, we see The Statue of Liberty, Jersey City and Staten Island. After a break for beverages, we wrap up at Castle Williams

Running water in the pools. Their names engraved on the marble marking the pools’ perimeters. My first time at the site of “Ground Zero,” now the 9/11 Memorial, since I served Federal Jury Duty. I look for, and fail to find, an old classmate’s last name. Meanwhile, smiling tourists strike poses for cameras or their own camera phones. My brother-and-sister-in-law walk on. Seeing the pools is enough.

water fountains all that remain of them are their names