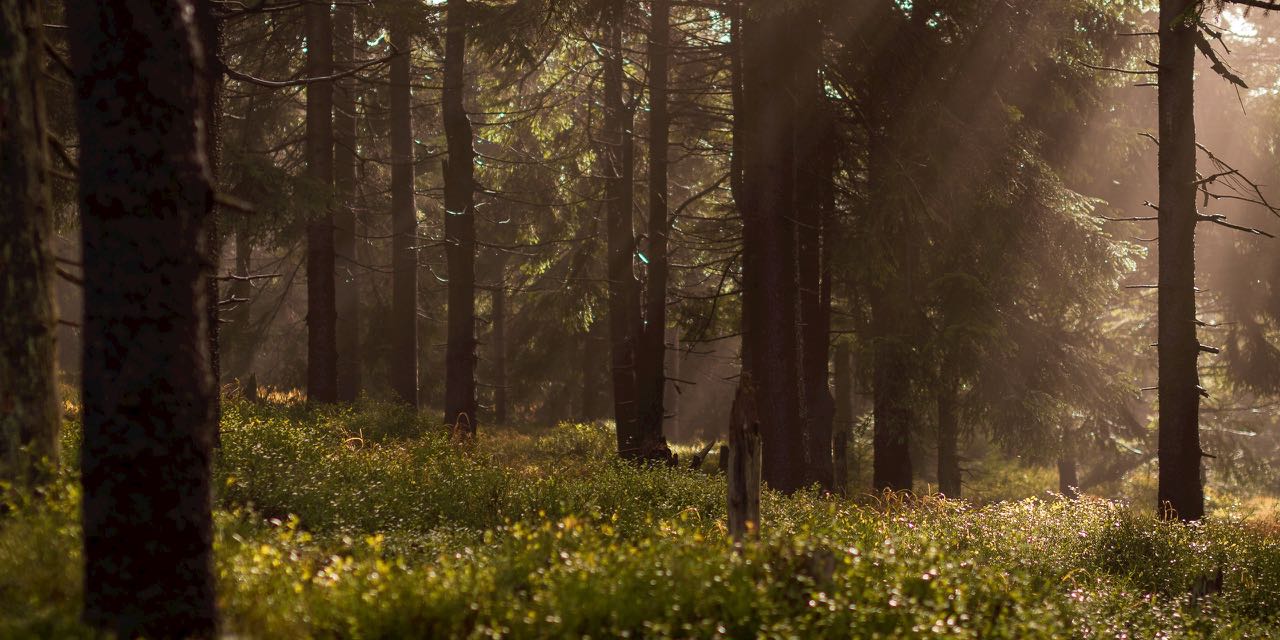 The Satyr wondered into the woods. It stopped by the feast grounds in a forest clearing. The tables were gone, the ground was littered with rotting fruit and fish. The soil was red with spilled wine. A band of rodents dragged pears and fish tails away into their holes. The trees were silent as usual, even though their branches were bruised and broken, and their trunks were urinated on by Gods and servants. The Satyr kicked a copper goblet in the grass and went along.

A few steps from the clearing a pheasant was eating a snail. The Satyr took the flask from its waste an offered it to the bird.

‘No, Satyr, I don’t take wine. And you look like you need it more than me. What are you going to do now that the feast is over?’

‘Prepare for the next one.’

‘And then the next one and next one, until the end of times. You are looking a bit down. The Gods mistreated you?’

‘Quite the opposite, in fact. They spoke to me.’

‘What an honor! I would give my wife and children for that kind of honor!’

‘I met the worst creature. A peasant of the greatest ignorance, that disliked music, feasts and the Gods. That is only fond of work and its family! Incapable of understanding high pleasures, the art of the anecdote, the lyrics of a song or the address of a God!’

‘Ah, no need to explain, the world is full of them. Ignorant to the bone. What kind was the one you met.’

‘I don’t know, I never met its kind before. It kept saying it had work to do, dams to build.’

‘Ah, this new devil! This beast is new to our woods and many have complained of its ignorant practices. Leave it behind. Tell me a joke!’

The Satyr took a drink of wine.

‘I have vowed to only tell jokes in front of Gods.’

‘So you never test them with us mortals, too see if they are funny enough?’

‘You could never understand a joke that have created for the Gods. They are superior thinkers with minds of the fire order. I craft my tales of humor tailored to their deep understanding of the universe. A simple minded bird or horse or deer could not possible see through it.’

‘Why don’t you try me anyway, you’ll be surprised,’ said the Pheasant.

‘No, my jokes are for the Gods only.’

‘Of course they are I understand. I was just teasing. The Gods see from above not like us from the dirt.’

‘Exactly, am glad you understand.’

‘And you Satyr, where do you stand in spectrum of creatures? Closer to the heavens or the dirt?’

‘Closer to the heavens, I am getting closer still for the God of the Forest spoke to me.’

‘Have you been to the heavens?’

‘So you live here among the mortal beasts but you are not one of us.’

‘You eat the grass, drink the water like everybody else. What makes you closer to the heavens.’

‘I told you already, I made the Gods laugh.’

‘So you are their clown?’

‘I am not a clown. I have mind deeper than yours or other mortal beast and use it to entertain.’

‘But you don’t get anything in return!’

‘I get closer to heaven,’ the Satyr took a gulp of wine!

‘Wine is the most delicious of potions in the world and I cannot live without it.’

‘You never wanted to have a family Satyr?’

‘I have two mortal sons from two mortal women that the Gods overlooked on feasts.’

‘Do too visit them often?’

‘Why would I visit them? They are always tired from work, complain of illness and ask for help. They say wine is bad, for that reason alone I should never speak to them. But sometimes I do. I was thinking before I met you to visit one of them that lives not far.’

‘Yes, family is responsibly. I have a large family with many sons and daughters and family of their own, cousins, uncles aunts. When we get together its the greatest joy.’

‘Both economical and political effort on your part to keep a crowd like that together.’

‘I see. The larger the family the more conflicts arise, disappointments and mishaps but the joy of all sitting on one table is enough to offset those.’

‘The only joy I need is wine. The rest is just too much work.’

‘The wine makes you lazy.’

‘But it makes my mind fast.’

‘What does a bird know about wine. Birds are meant to sing and stay in their branch.’

‘Is that what your Gods tell you.’

‘The Gods are always right. And I am right because I listen to them carefully!’

‘You are the worst type of ignorant! The type that is stupid but thinks is smart, that think knows there is to be know about life but doesn’t know even the basic governing principles. It pains me to listen to you!’

‘I feast with the gods, bird! You are nothing, nothing!’

‘You so ignorant that take the Gods’ insults as compliments. They didn’t notice you or address you, they sent you for more wine. And you foolishly cherish that moment. If I was you I would never go to a feast again.’

‘Not go to a feast. My whole life purpose is to go to feasts. My only skills are drinking wine, telling jokes and singing along with the chorus. If I don’t go to feasts there is no reason for me to live! I don’t have a family, I don’t have friends. We satyrs compete over each other at the feast so we avoid each other the rest of the time. Who are you to judge me? You don’t know where I come from and what is my purpose! You don’t know anything about me. Do you think it’s easy to be me. Wondering alone in the woods all year long. Do you think I am not lonely. Do you think I don’t understand! I understand and see everything from the heavens to the burning pits of hell. Are you that stupid, bird, that you don’t understand that some creatures in this realm have no choice. Have no choice, even though, it appears we do! Tell me are you that stupid!?’

‘I guess I am, Satyr. I guess I am. Catch your breath now. I thought you were going to kick me there for moment.’

‘So feasting with the Gods to you is what my family is to me.’

‘Mine is a higher calling, bird. Something beyond individual families. I entertain the Gods, the very rulers that govern our existence. They need a deserved rest from responsibility and I help them get it via laughter.’

‘The Gods don’t care about us,’ said the Pheasant resentfully.

‘Not for you or me but for the whole of nature. They cannot address individual disasters born of mere foolishness.’

‘You speak wiser than you look. You will be even wiser to quit the wine.’

‘I am not quitting anything. In fact I will drink more!’

‘Well, I feel sorry for you but for the most part I don’t care about you. So long, Satyr, I have to get back to my family.’

‘Go back to your pathetic life, bird.’

‘You too creature, you too.’