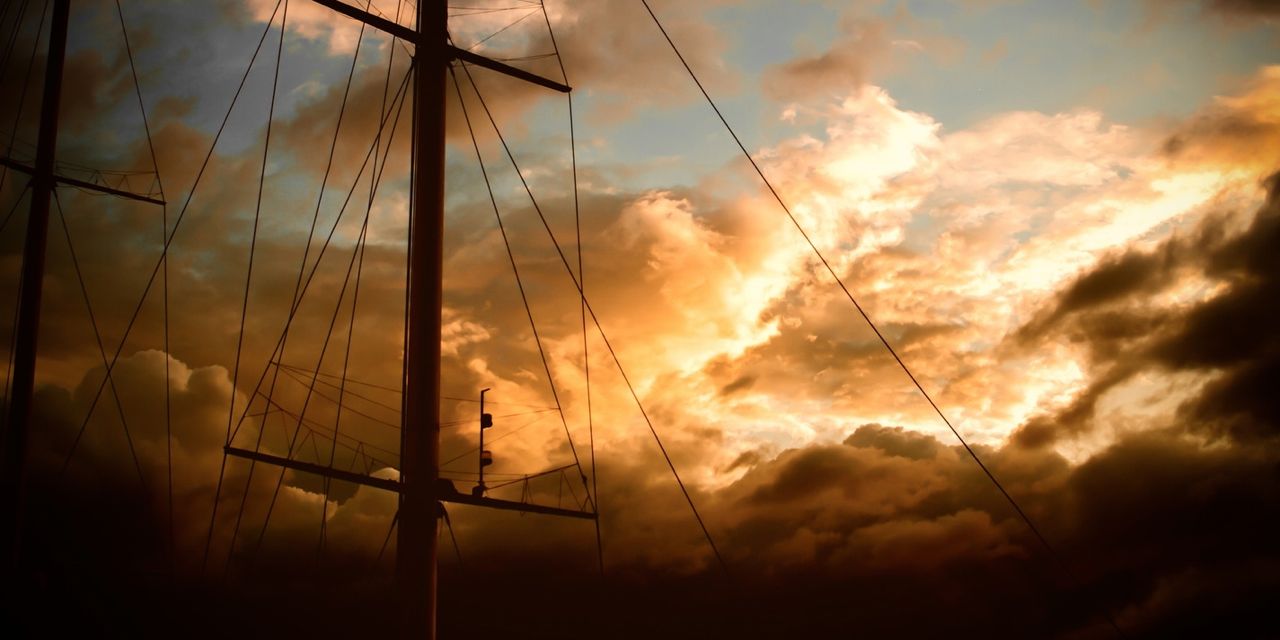 The not-so-ragged man was yanked back into consciousness by a rapid succession of muffled explosions. He flew from his bunk, out into the hall, and up the ladder. He fumbled through the darkened hallway until he found another ladder. Early morning sunlight and a raucous cacophony of sound poured through the hatch at the top of the ladder. He poked his head up above deck.

Captain Slick was at the helm, one hand on the ship’s wheel,  while the other flew across a flanking panel of levers and knobs. He was shouting something, but the not-so-ragged man had no chance of understanding him. The explosions were deafening. He scanned the deck and found the source of the din, the sight of which almost causing him to fall back down the ladder. Lug and Izel were standing at the starboard railing,  manning a very peculiar machine. It looked as if someone had lashed multiple large rifle barrels together. Small bursts of flame spit from the barrel ends in time with the tiny explosions. It was mounted on a railing that ran the length of the ship’s flank. Lug was furiously turning a crank while Izel seemed to be aiming. Countless rounds were being fired out towards the sea.

The not-so-ragged man climbed fully onto the deck, shielding his eyes from the sun and covering his ears from the sound. It didn’t take long to see what they were shooting at. It looked like a metal tube that was skimming along the surface on a pair of skis. The engine at the tube’s rear looked like two fat cylinders had been welded into a cross. Steam was pouring out of the vertical cylinder. The man thought he saw the outline of a man lying on his stomach under a sealed glass canopy. It was moving faster than any boat the ragged man had ever seen. It was moving parallel to their ship, trying to get closer. He stared in awe as the rounds from Izel and Lug’s contraption finally found their mark; tearing through the thin metal hull of the small tube boat. It sputtered on ahead for a few hundred feet before disappearing below the waves.

Izel stopped firing. Lug stopped cranking. The noise died down, leaving a terrible ringing in the not-so-ragged man’s ears. They saw him and ran up, removing wadding from their ears as they approached. Their lips were moving but he couldn’t discern what they were saying. His hearing returned just in time to hear Lug say, “shark shit.”

Before Lug could repeat himself,  Slick yelled, “Get up ‘ere!”

They climbed up to the helm. Slick addressed the not-so-ragged man first, “Glad you could join us. Did you ‘ave a nice nap?”

He ignored the condescension, “What in seven hells is going on?!” He pointed back towards the water, “What in the bloody hell was that thing?”

“That was a strafer,” answered Slick.

“A strafer. One of the armada’s scout ships.”

“First time in the Caribbean?”

“Best get accustomed to that feelin’.”

There was a brief pause.

“Who are ye people?”

“We’re the ones who saved your hide,” grumbled Izel.

Slick smirked as he gestured towards her, “This cheerful Azteca be named Izel.” His hand moved towards Lug, “And this blonde bear be Lögmar Bjornsson. Ya can see why we just call ‘im Lug.”

He gave a slight bow, “And I be Cap’n Slick Trudeaux. Welcome aboard the Dancing Devil.”

The not-so-ragged man held his hand out, “My name is…”

“Cyril McCutcheon,” Slick finished, “Didja think it were an accident we broke ya outta the Spaniards’ brig?”

Cyril nodded, “Oh well, but of course….thank you for that. I am eternally grateful……although I can’t imagine why you should go to such lengths for me.”

Slick eyed him knowingly, “Allons, Monsieur McCutcheon. We’ll get on much better if you do not play dumb. I would ‘ate to ‘ave to leave you floating in the middle of the sea.”

Cyril stood up straight and folded his hands behind his back. The nervous trepidation had left his tone, “What do ye want, pirate?”

Slick chuckled, “You say that word as if it were insult. But, I thought we agreed to not play dumb, no?”

Cyril responded, “I’m not playin’. I really am pretty dumb. Ye should ask me ma.”

Cyril spread is palms out, “Prison rags don’t have pockets.”

Slick folded his arms, “Ya ‘ave the core stone. I’d like ta see it.”

Cyril’s expression of confusion became one of scrutiny, “I’m supposed to give it to Dr. Abascal myself.”

Slick clapped his hands together, ” And you shall! but not before I’ve verified its authenticity.”

Cyril assessed the three pirates and the wide expanse of blue sea stretching in every direction. Saying no wasn’t really an option. He sighed and shoved his hand into his mouth. After rooting around a bit, he yanked out a large molar. Neither Lug nor Izel seemed all that fazed.

Cyril tossed the tooth to Slick, who then removed a shining dagger from its sheath. He used the dagger to scratch the surface of the molar, causing yellowish white flecks to fall to the ground. Underneath the thin tooth like coating, was a perfectly spherical diamond.

“Yo…ho…yo…ho,” Slick mumbled to himself with a wide grin. He tossed it back to Cyril, who nervously snatched it from the air with both hands. He opened his mouth to say something but Izel called out…

They turned to see her leaning over the railing, the spyglass pressed tightly to her face.

“Frigate!” She replied, “and more strafers coming in fast!”

“Blast it to ‘ell!” Slick cursed, “Get to the grinder! I’ll make a run for the coast line, try to keep em starboard!”

Lug and Izel bounded down the steps to the deck. Slick’s hands began to fly across the ship’s wheel and lever panel. Cyril gaped as massive sails unfurled along the masts, seemingly on their own. He called out to the Captain, “What should I do?”

Slick called back over his shoulder, “Stay outta the way and try not to die!”

next: The Pirates of Diesel Bay – Part Three (The End)

previous chapter: The Pirates of Diesel Bay – Part One

all chapters: The Pirates of Diesel Bay