Get Me to the Parthenon on Time! 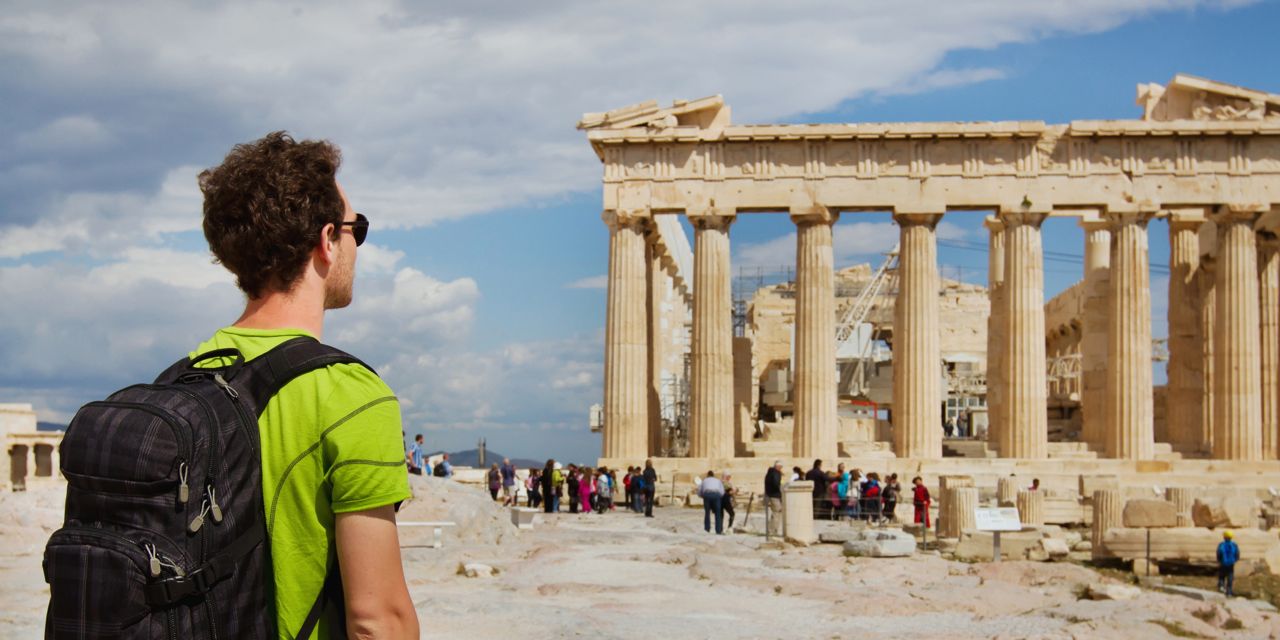 I got off the elevator and hurried into the lobby and out the front door of the hotel. I walked down to the end of the block, past the cigarette store on the corner, and made a left onto the street that would take me straight up to the Acropolis. I started picking up my pace. I was so late, and I was really bummed at myself for not only making my mom wait, but making the entire tour group wait for me.

So I started running. I don’t know how, because I was sick—tired, hungover, and REALLY over it. Yet for some reason, I ran. Like Forest Gump, I ran. Like bloody MARATHON, I ran.

The Acropolis was getting closer and closer as I was coming to the end of my five-block journey. Because its like a tiny mesa that juts out into the middle of Athens, there is a fence around the base to quarantine it as a designated tourist spot. I made it to the perimeter fence, yet couldn’t figure out how to physically get around and in to the entrance. So I reached into my pocket, pulled out my iPhone, and called my mom. She answered quickly.

“Hey, I’m at the base of the Acropolis and am trying to get in. Where are you?” I asked.

“OK, well, as soon as you come in, you’ll see a parking lot with all the tour busses parked. To the right of that is the staircase that leads up the Acropolis to the Parthenon. I’m on a bench near the base because my knees just can’t take all these stairs,” she said.

I told her I would see her soon and got off the phone with her. I took a wild chance and guessed that the bus parking lot she was referring to was on the left side of the fence. I followed that fence for what seemed like a few blocks until I spied the gate and realized my guess was correct. There was the parking lot and there were the stairs.

Suddenly, I got REALLY excited. I started charging up those stairs with a new vigor. It didn’t matter that I had just hooked up with a total Greek Adonis of a sex-stranger or had just puked my lungs up the hour before—I was going to see the PARTHENON, GODDAMMIT!

I brushed my headache pains aside, ignoring them, and smiled as a light rain began drizzling from above. I stopped at the information booth halfway up the stairs to guarantee I was going the right way. And I was—the mustached lady at the info kiosk confirmed. I was on the right path, adrenaline at my side.

These stairs I was climbing had been carved into this mountain several thousand years ago by men who formed ideas that would challenge the world. I felt like I was on some path to enlightenment. Here I was, about to see and touch one of the Seven Wonders of the World. And be able to stare out onto one of the greatest cities man-kind has ever seen. I felt overwhelmingly happy and grateful to be walking up those steep, rocky steps. I was ready to walk and breathe the same air that the greatest philosophers had breathed. I was about to see one of the greatest structures ever built. I was about to see the PARTHENON!

I stopped for a second to look around. I couldn’t see my mother on any bench, anywhere on the hillside.

This would have been A LOT of stairs for her to handle, I thought.

Nonetheless, I kept marching up those steps as if the Greek gods were beckoning to me: Parthenon. Parthenon!

I looked up and could see the few meters before the land flattened out onto the top of the plateau where the Parthenon and its glorious pillars loomed over Athens from the top of the Acropolis. I got to the second-to-the-last step and could see shadows of pillars through a thicket of olive trees at the top when I stopped short. I felt something on me.

I felt vibrating and it wasn’t just my tired, hungover legs being rebellious. It was my cell phone ringing. My mother was calling. I must have just zipped by her, I thought.

“Hello?” I said, turning around, hoping I’d just passed her.

“Where are you?” my mother asked.

“I’m at the top!” I said, gasping a bit for air out of pure tiredation but also pure excitement.

“OK, well you need to get down to the bus ASAP. We’re waiting for you, and we need to leave here soon so we don’t miss the city tour,” she said.

Thinking that she was on the stairs and that SURELY I would still have time to see the best building on earth, I said:

And that was that. I knew then and there that I had two choices to make: I could either jog up those last two stairs, take in the beauty of the Parthenon for five minutes worth of pictures and walking around, and run as fast as I could down those stairs to the bus. Or I could turn and walk away and miss seeing the Parthenon. But my mom’s words stung me:

I knew what I had to do. I made my Sophie’s choice. I looked up at those last two stairs, then down at the five million stairs I had just run up to get to this point, and I sighed. The Parthenon will be here for me to see another day .

And with that acknowledgement, I looked back at those last two stairs, then back at the stairs below, and started walking down them, away from the Parthenon. Then I ran. I made it to the bus thinking that everyone was going to be pissed at me for having made them wait and for potentially upsetting my mother.

But they weren’t mad. They had just finished boarded the bus, being old people, and were actually happy to see me and glad that I had caught up with them. I looked at my mom sitting down in the bus, and I said,

“I’m really sorry I was so late, Mom. I’m sorry I missed the Parthenon with you.”

“That’s OK,” she said. “This is your vacation too.” With that, I smiled. She was right, but her words comforted me and really made me understand just how cool my mother really is.

“Besides,” she said, “there were waaay too many fucking stairs. I never would have made it to the top!”

And I laughed. So did she. As fate would have it, neither would I ever make it to the top.

Not in the whole time my mother and I spent on that trip to Greece would either one of us ever set foot at the Parthenon. And neither of us has been back since.

In a way, I’m OK with that. As I said before, you can see the Parthenon from anywhere in the city. Ironically, the adonis and I still keep in contact to this day. I even went on to meet a few more Greek friends on the rest of the trip.

The way that I look at it is this: I got to experience my own Greece and have my own story of my own adventures in Athens. Plus, I will always be able to share with my mother the fact that, although we never made it up to the Parthenon, we did try. And often the journey is worth more than the destination.