The Woes of the Zombie Man – Chapter V 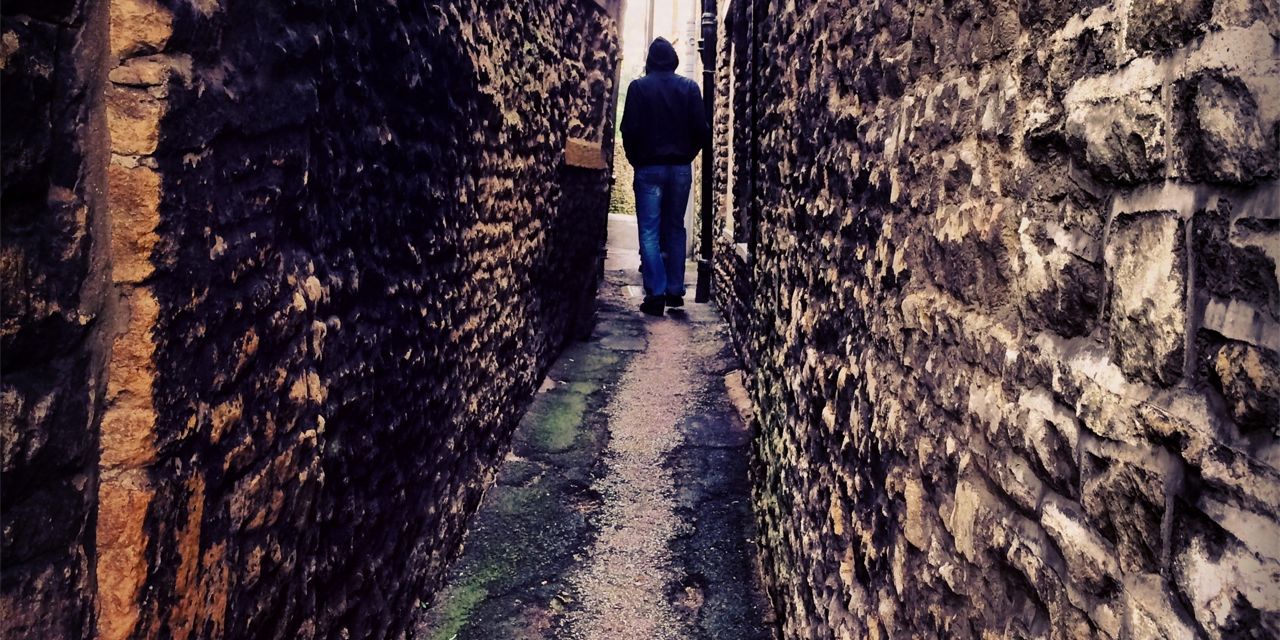 During which Boris is interrupted by and retaliates against libelers

Pot smoke swam between the brick walls of the alley as the wind played with it, possibly a little high itself. A rickety, lousily rolled blunt was passed from one misfit to another as a fit of coughing echoed between the walls. Seeing as hip hop and existentialism had already been thoroughly discussed, there seemed to be nothing left to talk about, when one of the grungy young men broke the silence and said, “I haven’t seen the Zombie Man in a minute, man. I wonder what that frickin’ sicko’s been up to. Probably some sick shit, I tell you that.”

“Oh, for sure,” replied the infinitesimally grungier of the two, “I bet he’s doing somethin’ super sick right now. Like voodoo wizardry or terrorizin’ the elderly or somethin’. Dude scares me, man.”

“I feel you. Just seeing him scares me. He’s for sure the sickest lookin’ dude I ever saw. I mean, you know I watch some nasty ass shit online, but I’ve never seen anything as sick as him. And I’ve tried. But he takes the top spot, man, no doubt. Dude, just thinkin’ about him makes my stomach feel, like, sick, you know?”

“Oh yeah. I know exactly what you’re gittin’ at, dude. That creepy fucker makes me wanna blow chunks real bad. This might sound stupid ‘n’ shit, but like, he’s not a real zombie, right? ‘Cause he’s like, monster status, bro.”

The blunt was passed. Coughing commenced and was quickly concluded, and the enlightening conversation continued.

“No, he’s probably not the legit real deal, but that’s a good point, man. I heard from my boy he ate his own family but the cops are too scared to go after him. I don’t know if it’s true, but you never know. I wouldn’t even blame the Federales, ‘cause that guy is, like, not fun to look at.”

“True, true. The Zombie Man is an ugly dude, that’s for sure. Maybe even the ugliest dude in the world. I mean, think about it. Do you really think there could possibly be someone even…”

Out of sight but within earshot, digging around inside of a dumpster, Boris tired of listening to such verbal abuse being spouted so incompetently about him. He stopped looking for grub, climbed out unnoticed, and walked away till he heard no more.

He couldn’t remember a time before that awful moniker. I wonder how long I’ve been living like this, Boris thought to himself. This line of thinking brought him to guess at how much time had sneakily crawled past him since his birth, the date of which he had long forgotten. He knew he wasn’t old yet, at least, he didn’t think it was so, but he didn’t feel young either. He caught a glimpse of himself as he passed a window. Approaching the cracked pane of glass to better study the face it framed, his already shrinking enthusiasm for living further depleted. To his own eyes he looked to have aged about fifty years postmortem, give or take a few dozen. It hadn’t been long enough since he’d last seen his wretched reflection, and judging by what he saw looking back at him, he was genuinely surprised he wasn’t an evil bastard. He definitely wasn’t the staunchest anti-immoralist, but he felt he was on the righter side of the ethical divide. He attempted to throw himself a good-natured smirk, landed on a scowl, and looked away, disheartened. Part of the problem was this: his skin, droopy and tight simultaneously, caused his features to appear unfathomably uncertain as to whether they were trying to convey their owner to be ecstatic or in mourning. Given one could look past the soul-tormenting morbidity of his detrimental skin condition, which one certainly could not, to determine exactly what he was feeling was a formidable task. Even when sleeping he looked like he might be smiling maniacally or bawling uncontrollably.

He didn’t know why people bothered coming up with all the slanderous stories about him, but he had heard some good ones.

“I never did nothin’ to nobody. Talkin’ about me all nasty. They must know somethin’ I don’t. No good sons’a’bitches!”

Feeling downtrodden with his hands in his pockets, kicking at the gravel, he stopped and thought a new, delightful thought: Maybe I can do something to make their perceptions less false. This thought brought to his face a devilish grin and he said:

“I’ll show those punks a Zombie Man. C’mon over here Bugger. We got some scarin’ to do.”

Creeping up from behind the grungy burnouts, one of whom was displaying his expertise on blunt rolling and giving the other a few pointers after some heavy criticism, Boris and Bugger were careful, keeping their movements slow, low, and quiet. Hidden around a corner, about fifteen feet away from his prey, Boris halted and listened.

“Dude, I don’t think Clinton even got a blowie. It was all just a cover-up so Obama could steal the oil. Have you even seen Zeitgeist?”

Boris was relieved that they were no longer talking about him, but the fact remained: they had to pay for their insolence.

Boris took a deep breath and walked into the alley with Bugger at his side. The two boys carried on with their conversation, not noticing the newcomers. To get their attention, Boris, who did not have much experience deliberately scaring people, coughed politely into his fist. The boys stopped talking, turned around, and looked at the intruding buzzkills, dumbfounded. Boris looked right back at them, slightly confused about what he should do next. After ten silent, awkward seconds, Boris recalled his enemies’ insolence and their having to pay for it, so he shook his arms in the air and ran at them yelling, “Boogaboogabooga!”

The two boys were flabbergasted. They cried out in fright as they fled. As Boris closed in on them, still waving his arms above his head and yelling what he thought to be scary noises, one of the boys fell and curled up into a ball, giving up completely. Boris let the other boy go free and stood there with his hands on his hips, towering over the pathetic bundle of fear that lay quivering beneath him. He felt powerful. Bugger stood beside him, exposing his teeth and growling at the scaredy-cat. Totally in control, with his hate for those who had shown him hate fueling his decisions, Boris pointed at the young man and yelled:

When Bugger lunged at the shrieking young man cowering on the ground, the other stoner blindsided the dog with a powerful kick to the body, re-breaking all of his previously broken ribs and breaking for the first time a few more. Without knowing what to do next, Bugger played dead and wished he was. Panicking and sensing his grip on authority slipping, Boris tried to grab the attacker to prevent another kick from being landed on his incapacitated compadre, but he was promptly dealt a devastating haymaker to the chin, sending him to the ground in a bloody heap.

As the assailant frantically tried to wipe blood and pus from his hand, half afraid he might turn, his fallen friend stood up with regained moxie and stomped on Boris’s and Bugger’s legs a good many times, crunching and grinding their grisly tendons into mush, to ensure they stayed down. And down they stayed.

“The Zombie Man never stays dead, dude! His hellhound don’t neither! We gotta go before they resurrect and eat us or some shit!”

The petrified potheads then dashed off at a full sprint covering about a hundred yards, at which point they stopped to wheeze violently, smoke a quick joint, and discuss Jay-Z’s involvement in 9/11.

Crippled and defeated, using only his arms, Boris sluggishly crawled towards Bugger, who was also crippled and defeated. Boris rested his head beside his friend’s on the cold ground. In this fashion he ruminated peacefully on the evening’s happenings, hurting badly.

next: The Woes of the Zombie Man – Chapter VI

previous: The Woes of the Zombie Man – Chapter IV