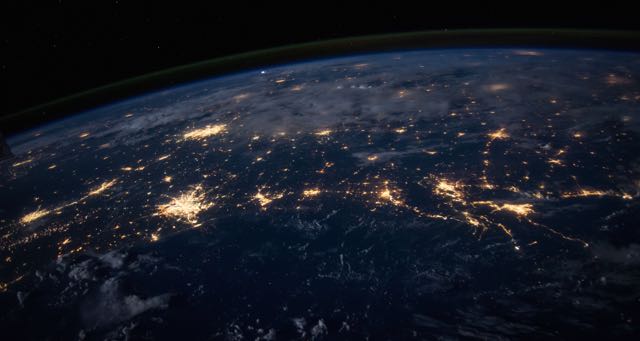 And so they do. Both walk past him and into the room to find Beatha still sitting in her chair. She raises her face she’d buried in her palms.

–  Are we unloading according to schedule?

–  Not entirely, Valora. The guns are not yet in transit. As for the water, our call for inspection has not been processed yet. Sato is awaiting your input.

– We can manage a short delay, it warrants no significant change to our arrangements.

– Those were more or less his words as well.

– We wait then. With any luck, the call goes through any minute now.

– Valora, your guest… he implied he might have hurt you?

– Do we open the door then?

Beatha avoids her guard’s unsettled look and slowly makes her way down the corridor, toward the sound of pounding on metal. Improvisation. Some people thrive on it. Twenty-nine years into an ever stormy forecast, Beatha is still unsure whether she’s exactly the type.

– I hate to see you leave in anger.

He turns to find her armed with an unforgivable smirk.

– Oh, surely you don’t presume you have the right to find me disappointing. – Beatha draws nearer and leans her back on the metal barrier.

His last words are spoken more to himself than anyone else. If he were only to look up, he’d catch that triumphant spark in her eyes. It disappears after a blink, leaving behind something soft and velvety, and purposeful.

– Life down there … doesn’t look easy from a third of an orbit.

He closes his eyes briefly and shakes his head.

– Same as everywhere else.

–  Not much more…definitely nothing less. – Augusto turns to rest his back on the door as well. –  Been to many moon-mines?

– I’ve certainly hovered over a handful, but never so much as stepped on one, let alone climb down.

– …besides the death rate? Not really keen on confined spaces, me. Drives me mad to have the walls that close.

– You get used to that. After a while, it’s being out in the open that weirds you out.

If he still had the bottle of wine by his side, Augusto would not hesitate to finish it. So strange, this feeling it gives him. Unburdened, yet fully present. His whole life these two states of being have been irreconcilable. He looks up, the long yellow corridor stretching before him. At the far end of it, the sound of a heavy load being moved around. Much nearer, around a corner, a steady breathing and a slightly faster heart rate, probably one of the guards that escorted him. And to his right, calm and clear, a familiar rhythmic sound. Last time he held on to it, he focused and focused until he could drown out everything save for Beatha’s breathing. Back then his brain was fighting to tell what was real from what’s not. Twenty years on, not much has changed.

– You’ve peered here and there beyond the Belt, I would guess. This ship is not made to drop cargo though. Is it yours?

– In part. Six of us have shares, and responsibilities to match.

– Oh, I can pilot her alright. But no, you can think of me as the payload operations specialist. Are you laughing, Rebellin?

– Because this is a joke, Beatha, a POS with two bodyguards, at least… If you’re going to go by an assumed identity, please try a little harder. You’re insulting my intelligence here. – he is still smiling but his eyes are suddenly expectant, attentive.

– I do handle the payloads. People reach out to me in need of things that are not easily procured. I…- Beatha’s hand makes a small circular gesture in the air before it falls back on her thigh.  – …offer them supply free of judgement or bureaucratic nonsense.

– There you are, coming into focus. – He lets out a sharp breath. – What did I just sign on to be delivered? Beatha?

– The workers on this moon are fed up, Augusto. It’s been building up for a while now, even you must have sensed it. Now they have the means to take things into their own hands.

– You’ve given them …weapons?

– Six cargo holds full of that, yes. The moon that you left an hour ago, you won’t find it the same as you land back. You might be forced to see some things in a new light, probably choose sides…

Don’t be such a child, she wants to say, don’t pretend you don’t know how the world works.

– You’re bringing more hell to this place… I can tell you there’s plenty already. And when it’s all over, when these people turn into a briefing statistics update and the cycle of suffering and desperation has been fed, it will all have been for nothing.

– You may find it hard to understand now, but once your anger’s settled down, you’ll see how unavoidable and, yes Augusto, unavoidable, do you think it wouldn’t have come to this with or without me?!

But he has already sprung to his feet. As he’s silently facing the door, the corridor lights throw the fine wrinkles on his face into sharp relief. It makes her shiver, the way he steels himself for a day that she may have called his last.

Beatha slowly turns away and opens a control box on the wall to her side. As she enters the digits, the doors open and Augusto hurries past her to his ride.

– Whatever you see down there, – she shouts after him – I’ve seen worse. I’ve seen worse and I’ve survived. And so will you, Augusto, remember that, even if you don’t believe it.

Nothing about his last steps in her sights tells her if he’s heard her or not.