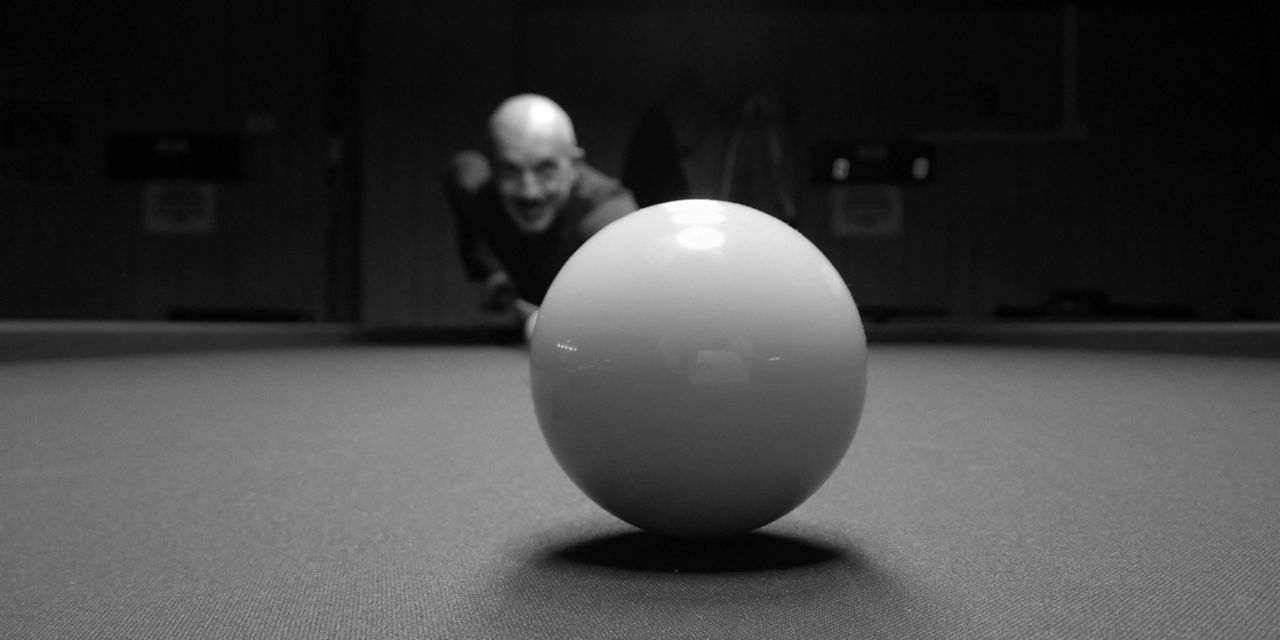 We called him Old Man Jim. He called himself a loser. He was around fifty. Short and round with skinny, unstable legs. He walked funny and his hands shook a little when he lined up his shots. We used to play pool with him nearly every day. I haven’t seen him in a few years. I’ll probably never see him again.

I racked the balls and Old Man Jim broke. He didn’t make anything. I studied the table and chose to go with stripes. I made three in a row. Old Man Jim shook his head and said, “Here we go again.” I ignored him and went for a bank shot. It didn’t go. Old Man Jim waddled up to the table and took a long look at the balls, squinting his eyes behind his thick glasses. He was always serious, full of tension. I’d never seen him smile. He took his time lining up a combo. He missed it and said, “I’m a loser!” He sat down, visibly disappointed with himself. I chalked my stick and looked at the balls. I saw a sequence I could end the game with. Two shots went the way I planned them. I made the third but I scratched. Old Man Jim picked up the cue ball and put it down on the table without giving its placement much thought. He quickly missed a shot and said, “It’s already over.” He did that often. He would just give up. Maybe he felt that if he lost on purpose it was his choice, and he hadn’t really been bested. I said, “Man, you had ball in hand. And with only one of my balls left to get in your way you could’ve gone on a run.” He didn’t even look at me as he sat back down and repeated himself. “It’s already over.” I made my last stripe and the eight. He put his stick back in his bag, slung it over his shoulder and left the bar without saying good-bye.

I got to the bar just after midnight. Slick, Riley, and Big Mike were in the parking lot waiting for me. They had just gotten there. Old Man Jim was drunk as hell when we walked in. He was excited to see us. Riley got us some beers and we all sat down at a round table. Old Man Jim was talkative. I think he was on coke. It was odd seeing him have a good time. I didn’t know he was capable of it. He told us his mom was out of town and he wanted us to come over and swim the next day. “Y’all can bring young, hot chicks and we can get drunk and hang out by the pool. My mom won’t get back for a week or so.” We told him we’d consider it. We knew we weren’t going to go, but it was a nice change to see him happy, even if he did seem a bit manic.

Old Man Jim was back to normal, hating himself. He lost a game to Slick and said what he always said. “I’m a loser!” Old Man Jim wanted a rematch, but Slick said he was done. I said I’d play. I scratched three times in a row and he beat me. I said, “Shit. Well, there you go. You got yourself a win.” He said, “It doesn’t matter. I’m still a loser.” I said, “Dude, you just won. In this instance you’re a winner.” He didn’t agree. “No, I’m not. I’m a loser.” It’s hard to argue with that. We were all drunk and somehow Old Man Jim started telling us about himself when he was our age. He hadn’t gone to college. He had signed up for the Army right out of high school. He said he’d never had a girlfriend or a wife. Big Mike said, “See. This guy’s got it figured out. No need to settle down. Just keep laying ‘em down your whole life.” Old Man Jim said, “Nope. Nothing like that. I’ve never been with a girl. Never touched one. They don’t want me.” Big Mike said, “Damn. Why don’t you just get a hooker? I bet we could find you a cheap one.” Old Man Jim said, “No. I’m not gonna do that. I want to die a virgin. I don’t deserve sex. I’m a loser.” The conversation sort of died after that. We didn’t really know what to say. We bought him a few drinks to cheer him up, but that didn’t help. Probably made things worse. He put his stick back in his bag and said, “Y’all won’t see me again.” We asked him what he meant, but he didn’t answer us. As he walked out the door he turned and said loudly, “I’m really gonna do it. Y’all won’t see me again. I’m gonna do it.” We’d heard him talk like that before.

I played a few games with Big Mike. Old Man Jim didn’t show up all night. We thought he finally grew the balls.

But he didn’t. He was sitting there by himself when I walked in the door with Slick and Riley. I went to the bar with Slick to get some beer. Riley went to the pool table and started racking the balls. Old Man Jim asked him if he wanted to play a game. Riley said, “Look, man. I’m not gonna play with you anymore if you give up or get mad. Sometimes you quit when you still have a chance at winning. And if I beat you just because you stopped trying that’s no fun for me. It’s pathetic. If I’m gonna play with you I want you to actually try.” Old Man Jim said he understood. Riley said, “I’m serious. I don’t wanna see any of that shit you pull. Just play the game.” Old Man Jim again said he understood. They played a few games. I watched them and drank a few beers. Riley won two. Old Man Jim won one. No outbursts. Old Man Jim was a good sport the whole time. They took a break and Riley got all of us a round of whiskey. Big Mike showed up just in time to get in on the free liquor. Old Man Jim wanted to play another game, but no one else wanted to. I said I would. I won the first game and I could tell he was upset. He hadn’t given up, though. He quickly racked them back up. He seemed determined. I made some shots. He made some shots. Soon I had one ball remaining. I made it and left myself an easy shot at the eight. As I lined it up I heard his self-disparaging mantra. “I’m a loser!” I made the eight. He threw his stick to the floor and yelled, “I hate you!” He picked up the cue ball and cocked it back like he was going to throw it at me. I flinched, but he just put the ball back on the table and sat down.