Tears From A Clown 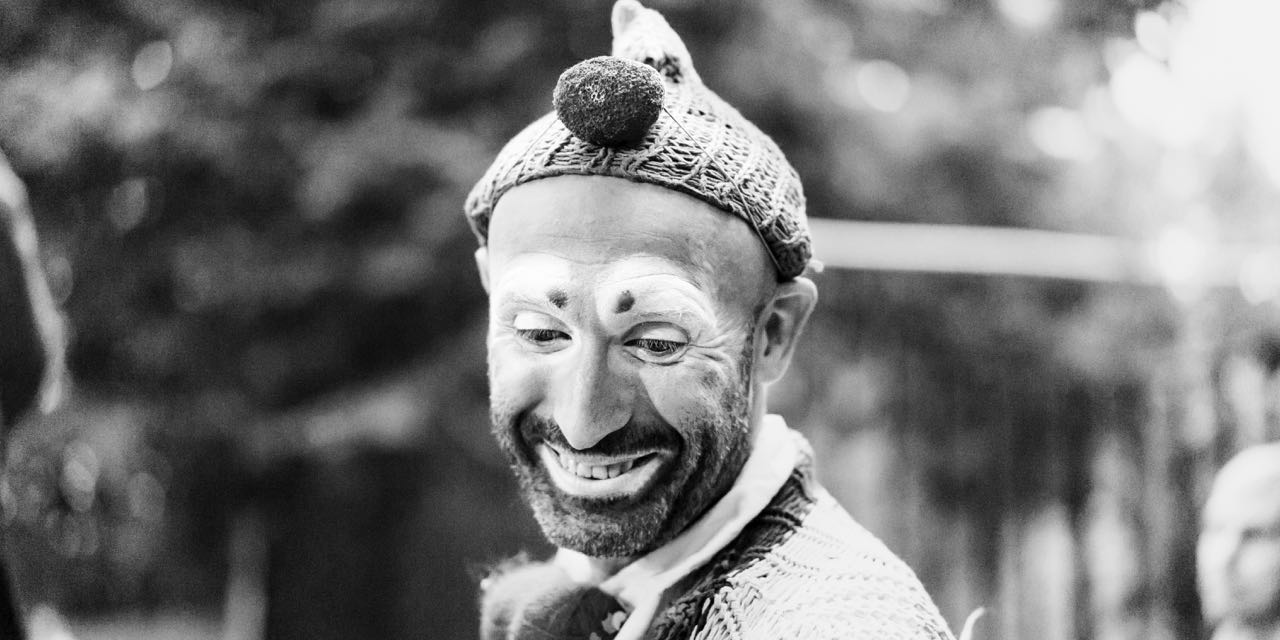 The man and his camera crew had been driving around for hours on the hunt for clowns. His news station decided to do a segment on all of the creepy sightings that had been plaguing the country over the last few weeks, and his goal was to interview any he could find so he get to the bottom of it.

Unsurprisingly, it was actually hard to track them down. His theory was that most of the sightings were fake. Mark, the man in charge of the project, sighed and pulled his van into a gas station next to a grocery store.

Mark was about to start pumping gas, but one of his cameramen poked him on the shoulder. “Hey, isn’t that a clown over there?”

His head swung around so fast that he was dizzy for a second. Sure enough, Mark saw what his cameraman was talking about…but something was off. The clown didn’t look very threatening; he was sitting on the curb in front of the store, makeup running down his face as he held multi colored balloons. Mark wasn’t sure if the small box next to the clown were cigarettes or not.

Mark turned to the intern who was assigned to shadow him. “Hey man, can you pump this?”

The intern looked like he wanted to go talk with the clown, but he nodded.

Mark told his crew to gather their equipment and they cautiously moved towards the clown. They stayed just out of reach, trying to get some stock footage of the clown while he was unbothered.

During observation, Mark noticed the way people reacted to the clown. They would flip him off, or yell vile things at him. Parents moved their children closer to their bodies, shielding them. Sometimes the clown would look up, but he mostly just stared at the ground.

Mark told his crew to stay back for a moment while he went to get the clown’s consent to film.

“Hello.” The clown looked up.

“I suppose you’re here to mock me, too.”

Mark was surprised at how sad the clown sounded. “Actually, the opposite.”

“I recognize you. You’re from the news.”

“Is it ok if I interview you for a news segment?”

The clown looked down and thought for a moment. “Are you gonna actually let me talk or are you gonna make me look dumb?”

“No,” replied Mark. “As long as it’s not vulgar, I’ll let you say whatever you want to.”

Mark called his crew over and they began to set up. The clown didn’t want to stand up, so Mark sat with him on the curb.

“So, first question—what’s your name?”

“Twinkles the Clown…but most people call me Dan.”

Mark looked over his notes. “When did you start being a clown?”

“I’ve been a clown for over ten years. I used to go to work events and birthday parties, but business is going down.”

“So you’ve been around long before all of the recent clown craze?”

Dan laughed bitterly. “I’ve been in the game for a long time. These jokers are amateurs and just doing it to freak people out.”

“You said that business had gone down; why do you think that?”

“Because all of these weirdoes running around dressed as clowns have set people off.”

“Why are you sitting in front of this store?”

“I’ve been coming here every Sunday for the last three years. I like making people happy…the kids would ask for balloon animals, and at the time I didn’t know how to do that. So I took a class and now I can make almost anything.”

The clown took a cigarette out of the box next to him and lit it. He offered one to Mark, but he declined.

“Dan, what do you think of these people who are dressing up like clowns? Is it a prank or do you think it’s something more sinister?”

“To be honest Mark, I’m pissed. Clowns are supposed to be funny, not wandering around and making threats, chasing people. That’s fucked up.” Dan paused for a second and then looked back at Mark. “Sorry.”

“We can bleep it out,” replied Mark.

“Anyways,” continued Dan, “Even though I’ve been here for three years, people are scared. They’ve known me for so long, and they still think I’m going to whip out a knife or something…I’m not. I’m just trying to make people happy.” Dan stopped and took a drag of his cigarette. “Now people spit at me. Kids who I’ve made balloons for scream when they see me. Parents tell me I should leave or that I should be arrested. I’m scared that someone’s going to hurt me, even though I’m not doing anything.”

“Because I want to prove that not all clowns are bad. I hope that I can still make someone laugh, or make a kid’s day with a balloon. “

Talking to Dan made Mark sad; he hadn’t expected to feel this unhappy while talking to a clown.

“I think that’s all we need, unless there’s anything else you’d like to say.”

Dan looked thoughtful. “Not all clowns are bad.” He looked back at Mark. “Thanks for letting me talk.”

“No problem. Hey, can I have one of those balloons? For my daughter…maybe I’ll bring her by next Sunday. Will you still be here?”