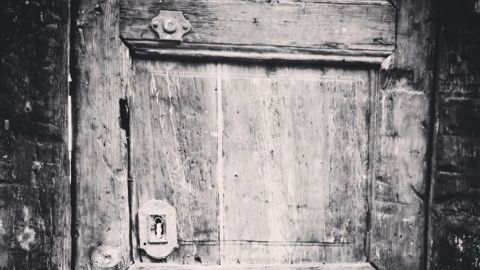 We were silent as we walked, the only sounds coming from roving packs of wild dogs who first sniveled and begged at us, then growled  when food was not forthcoming. “Vete perro, vete de aquí!” shouted Carlos, kicking at the beasts. They dispersed but they didn’t entirely go away. They were nothing more than skin and bones, their ribs clearly visible under their matted coats. It was easy to imagine what they might do if they happened upon a stranger walking alone, drunk and unawares.

Wary but unafraid they continued to stalk us from a distance. No one in our group seemed to notice but I found it unnerving. As if reading my mind, Carlos said, “Don’t fall behind guiri, or they’ll eat you alive.”

“I know it,” I said, looking over my shoulder at the dogs. What a miserable lot, their eyes where shining in the darkness behind us, I shivered.

“The dogs don’t frighten me, but I’m cold and ready to be inside, we walk too slow.”

It began to rain heavily and soon we were all cold and wet. I stunk of old clothes and stale deodorant. We arrived at the corner of Calle de Olivar and the tablao called Candela. A street lamp cast an amber light on the old structure and the wet paving stones. There was nothing extraordinary about the place, there was no sign, it’s façade might have been red once but had faded over the years to a dull, grimy pink and there was a tiny dark window in which nothing could be seen. Pablo knocked on a small wooden door barely large enough to allow a grown man to walk through safely without having to duck his head. We waited and I wondered if there was anyone inside until finally, the door opened with a blast of warm light and drunken chatter. Out stepped a man I instantly recognized.

“Augustín, it’s good to see you, old friend,” said Pablo as the two men kissed in the Spanish way, “May we come in?”

“Of course, you don’t have to ask,” said Augustín, “as long as you will do un cante jondo.”

“That’s not what I heard, I’ve heard rumors.”

“And that’s all they are, just rumors,” said Pablo.

Augustín stared at Pablo for a moment but decided not to pursue it, he turned his attention to Anna. “Mira hija, que guapa eres, look how beautiful you’ve become,” he said as he took hold of her by the arms. “I am happy to see you my little butterfly.”

“I am not that old yet so watch yourself Anita, you never know, I’m looking for a wife!” he said smiling, then kissed her on both cheeks. “Y tu?” he said, placing a large hand on Carlo’s shoulder. “You are now taller than your father, que Dios le bendiga, and more handsome even.”

“That is how young men are, let him enjoy his youth, he’ll be old soon enough, that is, as long as Franco doesn’t get a hold of him and send him off to war to die somewhere,” said Augustín laughing. Then he looked at me and his smile faded. “And this? Who is this?” he asked.

“Yes, man, he’s a good boy. He helped us with the soldiers. Now are you going to let us in or leave us out here to freeze?”

“Don’t worry old man, the dogs will get you before you freeze,” said Augustín.

“Either way, it’s no good, I’d rather die with a glass of brandy in my hand.”

“Now be patient Pablo, you were never very patient. These things take time. First there are hugs then introductions, then some conversation, and finally, yes, then you can come in,” he said, stepping aside and waving us in.

“Por fin!” said Pablo as he shuffled through the door. The rest of the troupe followed.

As I stepped through the threshold, Augustín put a hand to my chest, “And you, Americano, still pissing into rivers.”

“Good,” he said as he removed his hand from my chest, “I told you we would see each other again.”

next chapter: The Red Butterfly, Part Ten – This Is Where He Died