Angel In the Smog 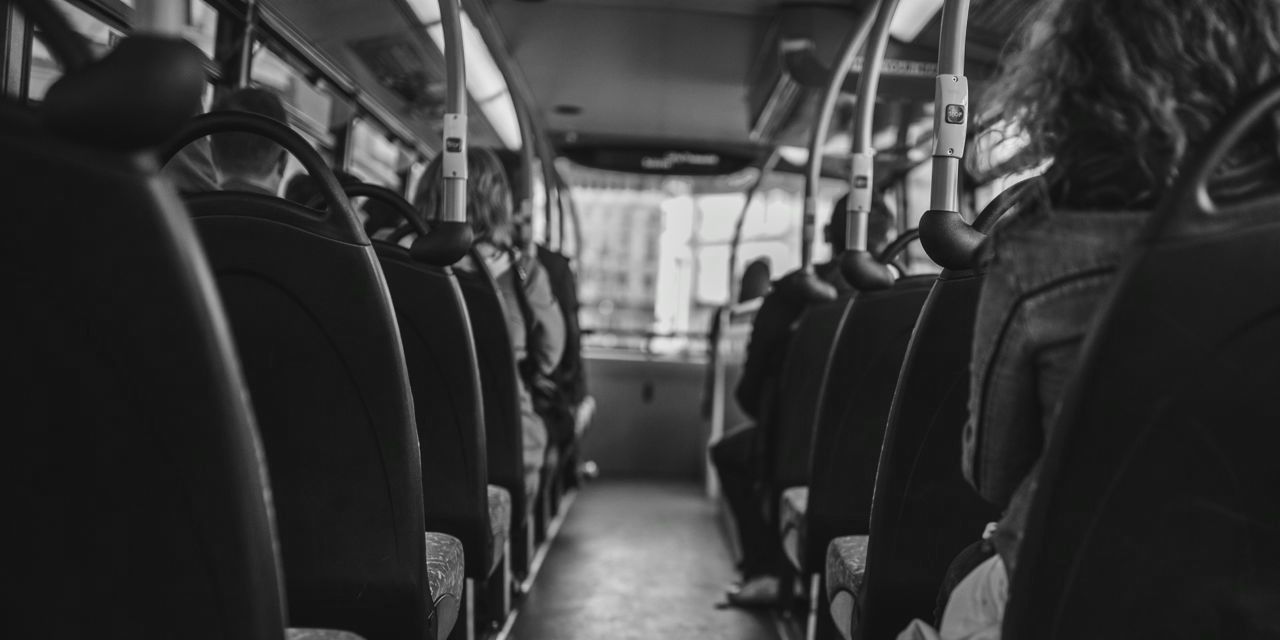 This bus driver is a good man. His ring is gold with lots of holes in it, intertwined like a wrap of some kind of jungle leaf or something. It makes me wonder… Trinidadian, maybe? I mean, he’s black. But there’s something exotic about him between the shape of his bald head and his somehow fiery brown eyes. They look like the sun when it gets trapped behind the smog in the city. Like you should be grateful for the existence of such a color, but also fearful for what is contained behind that color. He was whistling to an old Beach Boys tune. And I mean an old Beach Boys tune. Not a Pet-Sounds-Brian-Wilson-finding-a-new-sound tune, an old tune. After building back up to the second chorus, he stopped as we halted at a red light and put on his low-eyed glasses, peering over them to glance at a yellow piece of paper on a clipboard. A crayon-decorated pen hung in the balance between the cardboard and the worn steering wheel. The bus began to move again while he was still looking at the paper. His hand slid into a familiar groove in the wheel and greeted the leather with a soothing grip. It was only then that I looked up at noticed that the light was green.

He looked across the street at a group of young black boys, mid-teens, smiling and laughing on the street corner, their fists pumping into their palms in between embraces of moxie and unbefuddled form. His expression stayed constant, only his eyes surveyed back and forth, life stories coming to him. He was giving advice through the windshield (although if you ask me, judging by the condition of the plexiglass, it looked as if it were in place to protect more from bugs than wind).

He took his glasses off and rubbed his face. It was 7:39 pm. I wondered how long he had been working. I wanted to hug him. I wanted to have a conversation with him, perhaps it would lift his spirits. I asked some eager, bullshit question about the development of the infrastructure of the town we were passing through, saying I hadn’t been there in x amount of years. He gave a succinct and short answer and I felt lousy about myself for a second, but then realized that he was just a man at work. I shifted my glance to his glasses on the switchboard and wondered if he set them down the same way on his nightstand at home. They looked like reading glasses and he looked like an avid reader. I wondered how much he stressed the importance of education to his kids. Yes, he has kids. He has to have kids. Daughters. Two daughters with great hair, braces and new shoes. They were taken care of. But maybe one day their dad’s stressing education could get to be too much for them and they will want to rebel like an errant magnet searching for an opposite to entice them. Maybe it’s a dangerous boy who doesn’t know how cute he is. Maybe it’s a far away land that always seemed too far away. Maybe it’s a drug.

We hit a bump and I realized I was still looking at the glasses. My eyes wanted to look elsewhere but I was just staring like a toddler. I might as well have been chewing one of my fingers down to the bone with drool sliding out of my mouth. Then the man behind me spoke up.

“Excuse me, driver? I don’t know if you’re allowed to, but is there any way you could make a courtesy stop at the grocery store on this side of Pioneer?”

The driver just looked forward, eating up more of the road. I saw his foot shuffle on the gas pedal. It could have been routine, it could have been out of frustration. Regardless, the man behind me hung in suspended silence for a moment before turning his music back on in his headphones, chalking it up as a loss. I gave myself 50 bonus points and a slight smile out of spite for my, what I now saw as, successful interaction with the man. At least he spoke back to me. I could probably consider him a friend. I’m sure he talks to nobody.

I felt bad for the man behind me. I returned to my phone, checking emails and looked up at the next stop. We were at a small bus stop station next to a grocery store.

The bus driver is a good man.