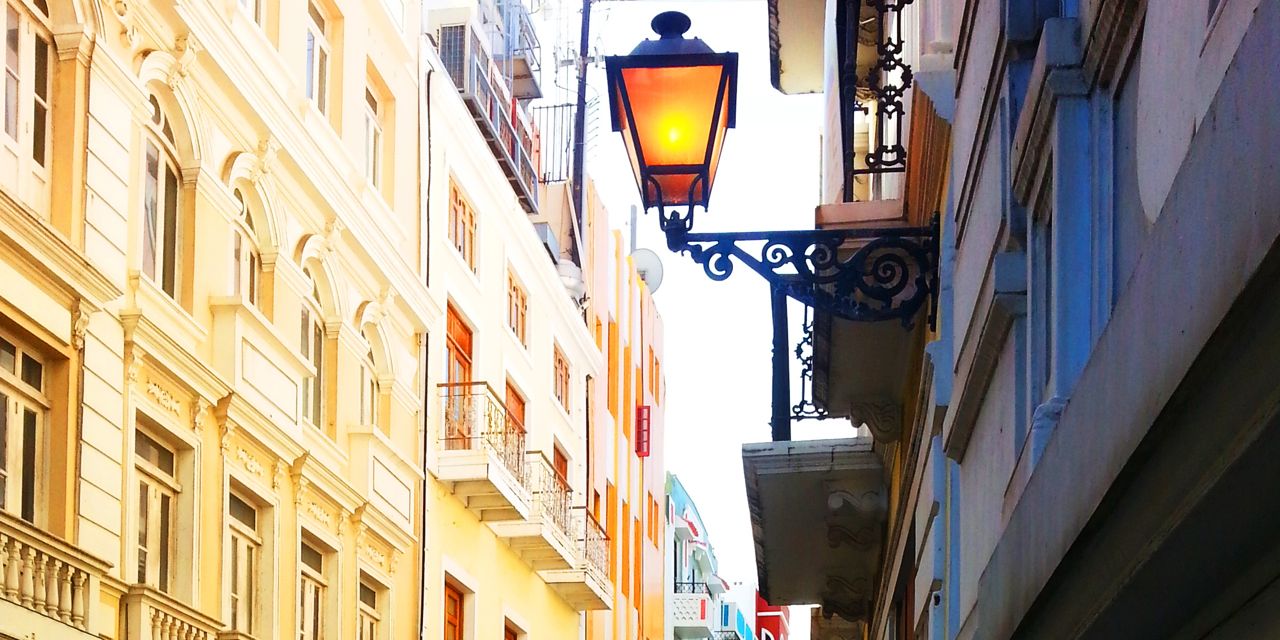 Barcelona: land of tapas, sangria, Gaudi, and magic! What else can one say about the crown jewel of the Mediterranean? Our first few days in BCN were pretty amazeballs. I had found a pensión, owned by a gay couple, for us to stay at in the middle of Eixample, in the heart of the city. The pensión was really an entire floor in a converted building from the 1880s that the owners had turned into rented rooms—bathrooms attached. Though it was on the fifth floor, there was an old-time elevator, so my mother didn’t have to worry about the stairs.

The neighborhood was too cute for words. Located right on Gran Via de les Corts Catalanes, our dwellings afforded us the perfect location to be able to explore all that Barcelona had to offer. Trees lined the streets and quaint little doorways and windows decorated the neighborhood. All the buildings in the area were only about six stories tall and were all conjoined just like in Paris—meaning each shared walls. There was a hint of Gothic, a hint of Victorian, a hint of Spanish, a hint of the medieval, and a significant, distinct Catalonian influence in the way everything was designed, architecturally.

One can’t mention architecture even in 2014 without mentioning one man’s name: Antonio Gaudi, patriarch of Barcelona. Barcelona is lush with Gaudi’s influence, and the city has this certain significant je ne sais quoi about it. His architecture gives it this enchanted feeling that I have never seen in another city. His artistry and design of the gothic cathedral Sagrade Familia can be seen from nearly anywhere in the city. I loved the whimsical, fairy-tale enchantment that was Casa Batlló, and Park de Güell fascinated me. Gaudi had this fanciful way of making old things look new and making fairytales into a reality. Perfect for the atmosphere of Catalonia.

He made the city look magical, and for that, Barcelona stands out as a truly unique city of the world. The fact that its beautiful skyline cuddles the Mediterranean makes BCN even that much more appealing to me. And I totally bought it: hook, line, and sinker. It didn’t take me long before I too fell in love with her, just like everybody else falls in love with Barcelona.

I immediately adored the pace of the city as well. Barcelona has a heartbeat and its pulse turned out to be everything I’d wanted it to be and more. Sure, the city was beautiful, but the people were what really fascinated me about Barcelona. The lifestyle and their concept of time were completely alluring to me, as I’ve always been a night owl since childhood.

Barcelonians, for the most part, wake between ten in the morning to noon and begin breakfast anywhere from eleven in the morning until one in the afternoon. Lunch was never served before three o’clock. In fact, anyone could find themselves eating lunch even as late as six p.m. Therefore, an early dinner in Barcelona wouldn’t even start until nine p.m. and could possibly end at two to three in the morning.

Of course, it wouldn’t be Spain if there were no siestas taking place at any given time during the day or if there wasn’t also dancing all night. Conquering “Barthelona” was exactly what I did every eve: danced my ass off until the wee, wee hours of the morning and siesta-ed during the day.

That’s really what I look for in any city: an opportunity to be able to dance my ass off all night long and play tourist during the day, surviving on as little sleep and actual food nutrients as possible. I call it the Euro Diet. Because all you do is run around whatever city you’re in and sleep little, which enables you to be able to take in as much of the country, city, and culture as possible. At the end of it all, you come out skinnier and more cultured, even if half anemic. Life does have its consequences. I employed the Euro Diet to its fullest. I was running on maybe two-and-a-half hours of sleep every night and constantly going. Never stopping.

On Saturday, I was out and about after a midnight dinner and went to use the Metro. I was struggling with the ticket machine when a guy about my age helped me through the Spanish-only kiosk to buy a pass and get on the train. He was obviously Moroccan or Northern African, yet had some European features in his face. He followed me onto the subway when it came, sat next to me, and even shared some of his music he was listening to. He told me he would help me get to where I was going. My Spanish is terrible, so it was nice to have someone so eager to help.

We reached our stop, or the station that he had told me was where I needed to get off at. We left the train and started walking up the stairs. He leaned in and tried to kiss me, yet I wasn’t that interested and had just met him, so I kindly pushed him back a bit, but in a way that clearly showed my disinterest. I wasn’t aggressive or mean or anything.

When we got up to street level and I looked around, I realized he had taken me to a desolate park in the middle of no-where. I didn’t know my location nor had my map on me. Wanting to check my GPS on my iPhone, I reached into my pocket. My phone was gone. I patted each of my pockets down and was like, Where is my phone? Finally, it occurred to me that he had probably pick-pocketed me so I asked him:

“Donde es mi mobile?” He shook his head as if he didn’t understand. I yelled, “No no no, DONDE ES MI MOBILE?” I reached out to pat his pockets.

That’s when he did it:

Before I knew what had happened, that Moroccan motherfucker slugged me in the face as hard as he could, knocking the sunglasses off my head, and then ran off before I could even realize what had happened.

I have only been hit in the face with a fist a few times in my life, and unlike Fight Club, it’s a memory you take with you for the remainder of your days. I felt humiliated, disgusted, betrayed, and violated. I hadn’t any clue where I was and had to rely on strangers to borrow money. All my euros where in my iPhone case. A crying mess, I barely made it back to my hotel and even then, only with the help of several people and their random kindness.

Little did I know that the guy had tricked me and taken me deep outside the city so the jaunt back to the hotel was especially painful. We somehow had transferred off of Barcelona’s metro line and ended up on the Spanish National Railroad.

Every person I looked at just made me cry harder at my own misery. It wasn’t the humiliation, just the realization of everything I lost with my phone. Sure, 2010 was a few years ago, but we still depended on our mobile phones then just as much then as we do now. My phone wasn’t just a phone. I write on my phone.

I’m currently writing this on my iPhone 4s. All of my short stories. My poetry. My music compositions. Gone. Just Gone. My photos and videos that I’ll never get back. Gone. I didn’t bring a camera to Barcelona, and was therefore relying on my phone to take pictures of the city. All those pictures: gone. My contacts: gone. My other notes. My texts. My voicemails. My Internet access. My personal info. My Google maps. My translator. My currency converter. My calculator. My navigator. GONE. You don’t really realize how much modern-day man relies on his mobile device until you’re suddenly without your own.

So needless to say, I was devastated. By the time I had crawled my way back into the city, the sun was starting to come up. I felt like Interview with a Vampire but I lost the job. I was a hot mess express and had no concept of anything, really. The time, where I was, who was around me, or anything else. By the time I made it back to La Rambla, I knew how to get home and had never been so grateful to see a shitty tourist hub of a city in all my life. I trudged up the boulevard toward Eixample and Universitat with a lot of heartache. I think it took me nearly two hours of walking and train riding to finally get back to the pensión we were staying in.

I wrote my mother a brief note stating what had happened—but that I was OK—and that I needed to sleep it all off. I posted a message on Facebook about what had happened and asked for advice from the people of the page about any way I could track my phone down. I don’t even remember falling asleep. I felt heartbroken and violated.