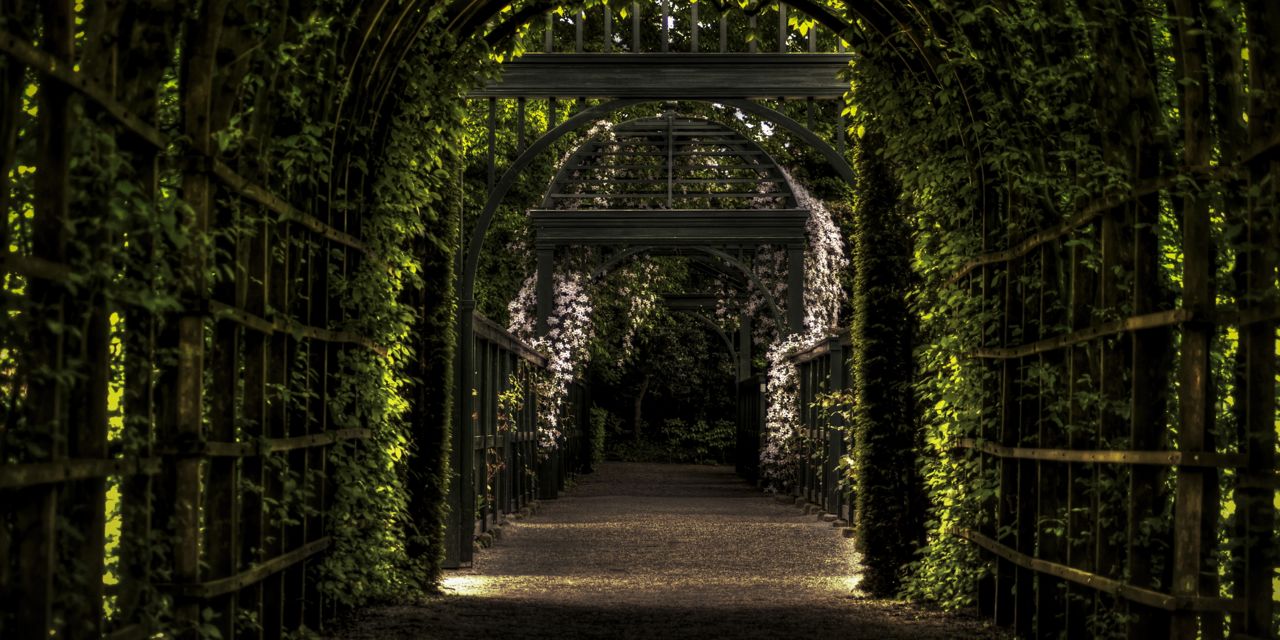 Haaga wiped green blood off his blade as the servant, Oorlo, led them out of the lounge, through a deserted kitchen, and into a maintenance hallway.

“It should be a while before they think to check here,” he explained

“Why don’t we just go back to our cruiser and get the hell out of here?” asked Deilan.

“That’s what they expect us to do,” answered Haaga.

“Probably have every guard left waiting in the hangar,” added Jorwei. Then, after a moment, he asked, “How many troops they got on this boat anyway?”

Haaga grunted, “You tried to jack this ship and didn’t even bother to research the security?”

Haaga interjected, “Enough.” Then to Oorlo he commanded, “Lead on.”

The motley group hustled down the corridor until they came to a door. Oorlo slid it open just enough to peak through.

“Let’s go,” he said. They followed him out of the corridor and into a massive atrium. The room was twice as large as the first lobby and was packed tightly with exotic vegetation. There were thick trees, and multicolored vines. Plants sprouted bright flowers, some of which sporting petals five feet in diameter.

“There’s another maintenance hall on the other side. It will take us to the serving quarters. Don’t touch anything.”

They crept along the winding pathways. Jorwei caught Cabby hungrily eyeing a flower.

Cabby made a point of glaring at Jorwei while he plucked and ate the flower. A high pitched beeping alarm suddenly flooded the room.

Haaga whirled around, “Did someone touch something?!”

The reptilian, Shai, hissed ,”We have three minutes at most.”

Deilan wasted no time; diving into a thick tangle of blue brambles. Jorwei found a bush that looked comfy and hopped in. He got himself situated and tried to see where the others had gone. Syl shimmied up a vine-covered tree, making herself almost invisible. Cabby wedged himself in between two wide green tree trunks. The servant, Oorlo, was crouched amidst a thick plume of bright orange fruit. Haaga and Shai were out of sight.

The next minute passed at an agonizingly slow pace. Jorwei decided the shrill beep of the alarm was worse than any torture. Mercifully, the beeping ceased, but was quickly replaced by the muffled clicking of approaching boots. He heard an unfamiliar voice call out, “Over here!”

The air exploded with gunfire and indiscernible shouting. Jorwei crouched low and began scrambling through the foliage. Heavy vines and wide leaves obstructed his view, and the cacophony of battle drowned out all other sounds. Just when he thought he had found a clear sightline, Jorwei’s foot caught on a thick root. His momentum was too great, and he fell forward, tumbling into a pathway at the feet of two surprised Ochrean guards. They took aim, and Jorwei raised his arm, as if it could do any good against a volley of autoshot. Then the guards’ eyes went wide, as a new hole appeared in each of their chests. They collapsed and Jorwei looked up to see Haaga step out from behind a giant red flower petal. Jorwei hadn’t known it was possible to be this relieved to see someone in a U.L.E. uniform.

“Let’s move!” was all Haaga bothered to say. Jorwei pulled himself up and hustled after the large Ochrean. Haaga jumped off the path, and Jorwei followed suit. They sidled up behind a thick blue and brown tree trunk. Haaga extended one finger upwards, “I’ll boost you up. Try to find a vantage point without too much rustling.”

Jorwei slung his rifle over his shoulder and placed a foot in Haaga’s clasped hands. Haaga hoisted him up with a surprising level of ease, and Jorwei found a perch amongst the branches. He brought his rifle around in time to see a tangle of two bodies come crashing out into the open. One was a guard. The other was Haaga’s reptilian comrade. The guard lashed out with a meaty fist, but Shai’s python-like head and neck easily avoided the blow. He countered by sinking his hooked fangs into the guard’s shoulder. The guard grabbed hold of Shai’s neck with one hand, and unsheathed a short blade with the other. The knife was inches from Shai’s throat when Jorwei’s shot exploded through the guard’s skull. Shai wasted no time in shoving the corpse off of himself. He didn’t even bother to wipe the green blood from his mouth before disappearing back into leafy cover.

Jorwei would’ve liked to gloat over his marksmanship for a moment, but a barrage of autoshot tore through the tree branches. He felt the heat of a round shriek by his ear, lost his balance, and fell off his perch. He hit the ground hard; the air fleeing from his lungs like an escaping convict. As he lay there wheezing, a pair of rough orange hands took hold of his shoulders, and yanked him up with little delicacy.

Haaga looked him up and down, “Can you still fight?”

Searing pain pulsed through Jorwei’s side and chest. Something had definitely fractured, but he managed to nod in reply. Without another word, Haaga took off into the brush. Every step burned in his chest, but Jorwei pushed through it and kept pace. After a few seconds, Jorwei noticed the sounds of gunfire had subsided. Other than the rustle and crunch of his and Haaga’s movements, the air was quiet.

Suddenly, the dirt and vegetation gave way to smooth stone and open air. They stood in a small clearing, surrounded on three sides by plant life. Two narrow paths wound back in the direction they’d come. The fourth side of the clearing ended at a door set into a high metal wall.

“You think that’s the maintenance tunnel?”

Haaga’s answer was interrupted by the electric whine of a charged autoshot.

“Flinch and you die!” growled a voice from behind them.