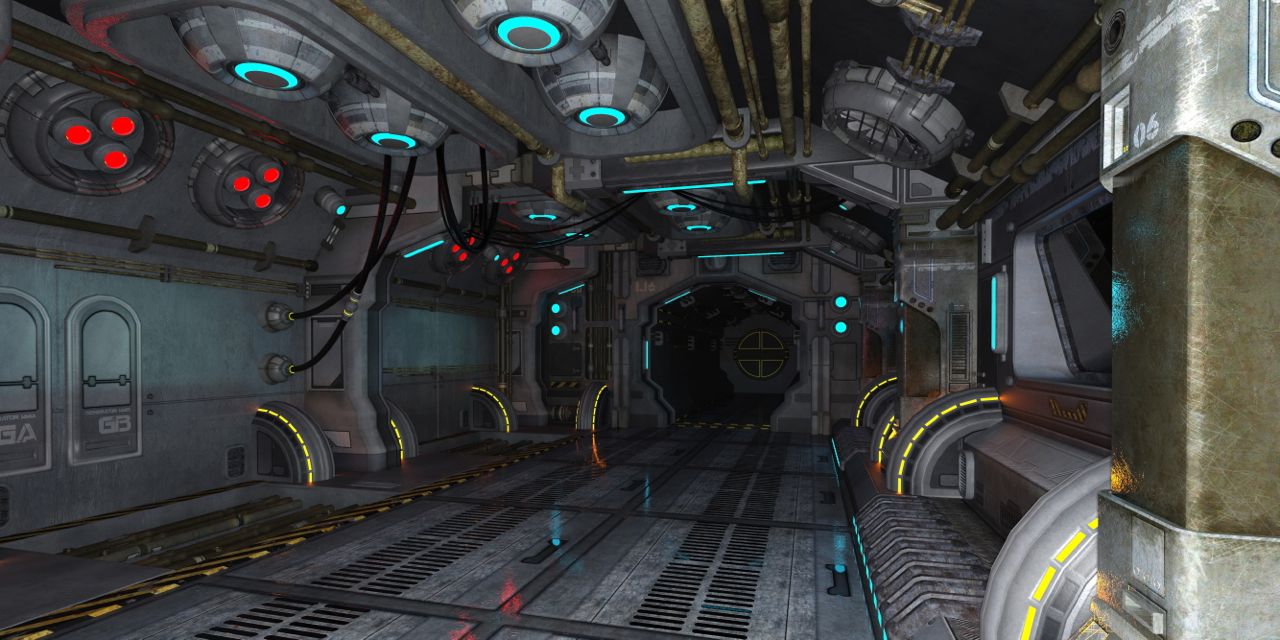 Jorwei and Haaga turned cautiously to find a haggard looking guard holding an autoshot carbine in each hand.

Jorwei spoke calmly, “Okay, you got us… take it easy…”

“Shut up!” barked the guard, “Lay face down on the-” His words devolved into pained gurgling noises. The guard slumped forward and collapsed to the ground, revealing the lithe frame of Syl standing behind him. She reached down and casually retrieved her dagger from the guard’s back.

Jorwei wiped a bead of sweat from his brow, “Nice timing, Syl.”

She responded with, “I believe that was the last guard.”

Haaga asked, “Have you seen Shai?”

Syl nodded, “He’s back that way,” then to Jorwei she added, “Deilan is dead.”

She shook her head, “Not exactly.”

Jorwei, Haaga, Syl, and Shai looked down at Deilan’s corpse. His body was extremely bloated, and his once crimson and white complexion was now pale blue. His body lay just a few feet from a tangle of blue brambles.

“Why would they have it in here?” asked Jorwei.

“He took three shots to the chest,” answered Shai.

“What about Cabby?” asked Jorwei.

They wheeled around to see the walking stalk of broccoli stumble out from behind a tree. He limped over, and Jorwei could see a thick cloudy liquid trickling from a hole in his thigh.

Cabby responded dryly, “Thank you for telling. Cabby did not know.”

“Well, shit, then we’ll have to cauterize it.”

Syl countered, “We’re Vegemin. The heat will fry him.”

“If we don’t do anything, he’s going to drain out.”

Syl stepped off the path, and scooped up a big handful of dirt. She made a hacking noise and spit a glob of viscous goop into the dirt. She worked it all together in her hands, and walked over to Cabby. He grunted in discomfort, as she packed the sticky dirt wad into the hole in his leg.

“Now you the racist,” quipped Cabby.

The group of five found themselves in a luxurious yet cavernous hallway.

“I don’t think this is the maintenance tunnel,” commented Jorwei.

“You must be the smart one,” added Shai.

“Very funny, Scales,” retorted Jorwei, “You got anything useful to say?”

Haaga waved a hand, “Enough. We need to keep moving.” He looked back and forth for a moment, before finally settling on the stretch of hallway to their right, “This way.”

The ship was eerily quiet as they made their way down the hall. They turned corner after corner, passing multiple darkened and deserted rooms.

“Did we kill everybody?”

“No,” answered Haaga, “There are at least two more security squads somewhere on this vessel. Not to mention the flight crew, the servants, and that pile of dowfa shit, Raajo Ruun.”

The group came to a halt at a sharp turn in the hallway. Shai sidled along the wall, cautiously peaking around the edge. He barely pulled his head back in time to avoid the barrage of gunfire.

“I think we found one of the security squads!”

Haaga glared at Jorwei and growled, “Pull back!”

The group turned and made for a quick retreat, with Syl rushing out in front. Caution was foregone in favor of speed as they rounded the corners leading back the way they’d come. Syl stepped out into the next turn and a blast of autoshot shredded through her torso.

Cabby let out a rage filled cry as her limp body collapsed. Jorwei grabbed his arm, and hauled him into one of the darkened rooms that lined the hallway. It was lined with long, cafeteria style tables and benches.

“Must be the staff galley,” Jorwei muttered to no one. Then to Cabby he said, “Quick, flip a couple of these tables over!”

Cabby wasted no time in hurling benches and upending tables with unchecked fury. The thundering of approaching boots filtered in from the hallway.

“That’s good!” called Jorwei, “Now get behind one!”

Cabby ignored him and, moments later, a cadre of guards stormed into the room. They were taken aback for moment by the sight of a giant stalk of broccoli holding a six foot bench. Cabby roared as he sent the bench flying through the air. Jorwei gawked with awe as the bench careened into the squad, toppling the guards like a bunch of orb roller pins. Cabby, his rifle lying on the floor, rushed forward, opting instead to continue the fight with his bare hands. His hands gripped the heads of two disoriented guards and brought their skulls together with a sickening crunch.

Another guard managed to fire a shot into Cabby’s chest, but that only made him angrier. He lunged forward, taking another two shots to the stomach, wrenched the guard’s weapon away, and hit him in the jaw with such force that the guard’s head snapped back. Jorwei was pretty sure the blow had broken his neck. Cabby roared again and dove into the hallway amidst a hail of gunfire. The sounds that followed; the pop of gunfire, the shrieks of pain, the feral howls of Cabby, would haunt Jorwei for the rest of his days.