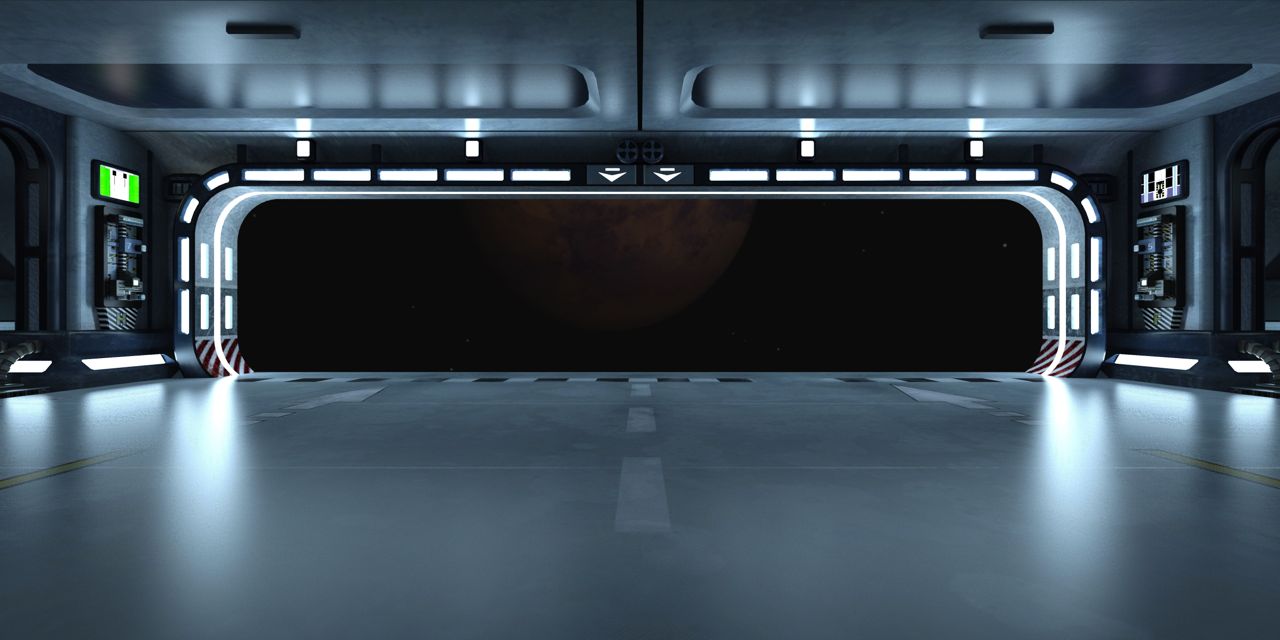 “Time to do something stupid,” grumbled Jorwei. He leapt up from his cover and sprinted through the door. A trail of bodies, blood, and bullet holes lead down the hall and around the corner. Jorwei cautiously  crept foreward, rifle held at the ready. He heard the crunch of a misplaced step behind him, and spun around. He brought his weapon up towards the darkened doorway where the sound had originated. He held his breath and felt his finger tense against the trigger.

Haaga and Shai stumbled into the hall from the darkened room. Jorwei lowered his rifle and exhaled deeply, “Zuul-dammit, I almost shot you.”

Jorwei noticed Haaga was helping support Shai’s weight as the reptilian clutched at a wound in his side.

“My life expectancy is no shorter than yours.”

“He’ll be okay,” Haaga explained, “at least, as okay as any of us will be once this is over. Where is the large Vegemin?”

Jorwei answered by gesturing at the surrounding carnage.

Jorwei hefted his rifle, “Yeah, he’s something else.”

They followed the bloody trail until they heard shouting coming from around a corner. Haaga and Shai hung back, while Jorwei crept foreword. He ducked low and risked a peek around the turn. Cabby lay on his side in the middle of the floor. His eyes were closed. Two guards stood over him, while a third crouched next to one of their wounded brethren. Jorwei was about to pull back and report his findings when a stir of movement drew his attention. Cabby’s eyes fluttered open and, after a few blinks, his gaze met Jorwei’s. Jorwei mouthed the words ‘stay down,’ which seemed to amuse Cabby because he smiled wide.

“Hey, he’s awake,” noted one of the guards. He gave Cabby a kick in the back, “You still haven’t had enough, you dirt chewer? What’re you smiling about, mulch meat?” The guard followed Cabby’s stare until his and Jorwei’s eyes locked.

“Ah, shit,” muttered Jorwei. In a flash, he was around the corner with rifle raised. He squeezed the trigger, putting a mecha bolt through the guard’s forehead. A splatter of green blood hit the other standing guard in the face. Before he could register what had happened, Jorwei’s second shot buried itself in his chest. The crouching guard dove for his weapon, and managed to get a shot off before catching a handful of mecha bolts in the gut. Jorwei threw down his rifle and ran up to Cabby, kneeling at his side.

His breathing was pained and shallow, but he managed to respond, “Cabby feeling tops.”

“I’m sure you are,” Jorwei glanced around the room, “You did good work here, man.”

Cabby smiled again and closed his eyes. A few more breaths shuddered through his body, and then his large frame lay still. Jorwei stood and turned around to see that Haaga and Shai had caught up.

Jorwei looked down to see blue blood dripping from a gash in his leg. He shrugged, “My life expectancy’s no shorter than yours.”

Shai snorted. Haaga nodded towards Cabby, “My regrets for your comrade.”

Jorwei fought to keep his expression neutral, “So what do we do now?”

Haaga drew his pulse pistol, and approached the wounded guard. He kicked him in the legs, “I know you’re awake.”

The guard groaned and opened his eyes. Haaga tilted his head towards the door at the end of the hall, “What’s through there?”

The guard glared up at him with steely resolve.

Haaga squatted down and pressed the barrel of his pistol against the guard’s ankle, “At point blank, this shot will probably blow your foot clean off.”

The guard hesitated. Haaga made a show of wrapping his finger around the trigger. The guard’s voice squeaked, “Okay! Okay! The door leads to the bridge!”

“Any security detail in there?” Haaga tapped the pistol lightly against the guard’s boot.

The guard shook his head, “We were it.”

Haaga stood and said, “Thank you,” before casually shooting his fellow Ochrean in the head.

“Damn,” said Jorwei, “That was cold. You really hate your own kind, huh?”

“He was from the ruling caste. He might have been Ochrean, but he was not my own kind.”

“Got it,” Jorwei drew his own pistol and added, “Shall we put a cap on this shit storm of a day?”

The surviving trio of Jorwei, Haaga, and Shai limped their way down the hall, coming to a halt at the bridge door. Haaga and Jorwei readied their pistols, while Shai typed in the door code.

“Damn, you have the access codes? You guys really did a lot of prep work,” commented Jorwei.

“It’s called being a professional. Maybe I’ll show you how after this is over,” grumbled Haaga.

Jorwei couldn’t help but laugh. Haaga looked to Shai and nodded. The door slid open and they rushed into the bridge. The half dozen members of the flight crew shrieked in terror and dropped to the floor. Raajo Ruun frantically reached for a pulse pistol on the table next to him. Just as his fingers grazed the weapon’s grip, Haaga’s shot drilled through the besuited Ochrean’s right shoulder. The force of the shot sent Raajo sprawling from his chair. As he lay on the floor, his pained whimpering slowly morphed into a giggling fit. Shai and Jorwei glanced at each other with perplexed expressions and shrugged. Haaga glared down at the wounded executive, “What is so amusing?”

Raajo winced as he pulled himself up into a sitting position. He glanced at his limp bloody right arm, and then looked up at Haaga with a smirk, “You want to kill me so badly… yet, you’re only way out of this is to let me live.”

“How you figure that?”

Raajo used his good hand to unseal the seam of his suit jacket. He pulled the flap open to reveal a small square device affixed to his chest. A small green light blinked slowly. Haaga took an involuntary step backward in surprise. Raajo sighed, “I know… the whole ‘fusion-bomb-synced-to-my-heartbeat’ thing is so cliché. But you have to admit, it’s effective. Now go get in your stolen cruisers, and get the fuck off my ship.”

Haaga was at a loss for words. He looked at Shai, who could only shake his head, as if to say, I got nothing.

A casual voice chimed in, “I might be able to help.”

Haaga and Shai turned to see Jorwei lounging in the recently vacated captain’s chair. Jorwei cocked a finger towards Raajo, “Why don’t we just stick yolk head over there and his cronies in one of the cruisers, and set ‘em adrift. Then we take this big beautiful piece of intergalactic transport. Wham!” he clapped his hands together, “You get to free the servants, and I get one of the biggest scores ever.”

“One problem,” sneered Raajo, “I activated the distress transceiver. The real U.L.E. will be here within thirty standard minutes.”

“Well, damn…” Jorwei feigned disappointment, “That does put a Klip in my plan, unless…” he smiled at Haaga and Shai, “I’d bet all the ale in Flanisi you two know exactly where the transceiver core is, don’t you?”

Without a word, Shai walked over to the navigation console. He knelt down, dug his clawed fingers into the console’s front panel, and pried it open. He plunged a long scaly arm deep inside the exposed tangle of wires. After a few seconds, there was a snapping sound. Shai removed his arm from the innards of the console, his hand now clutching a black metal sphere with two severed wires poking out from the top.

Jorwei grinned devilishly, “Well, would you look at that!”

Five minutes later, Raajo and the flight crew were bound and sitting on the floor of the stolen U.L.E. cruiser. Jorwei set the transceiver core in Raajo’s lap, and patted him on the head while saying, “Now don’t you worry. We’ve set the cruiser’s auto-fly to start heading towards open space. The U.L.E. should find you well before you crash into anything.”

As Jorwei and Haaga made their way down the exit ramp, Raajo cried out, “You’re dead men! You hear me? We’ll find you! You can’t possibly hope to hide an entire freight liner!”

They hit the hangar floor, and Haaga pressed the button to retract the cruiser’s ramp. Once it was closed and sealed, he turned to Jorwei and said, “He’s right, you know. Shai can fly this thing, but I don’t know of anywhere that would take us in.”

Jorwei smiled warmly and placed a hand on Haaga’s shoulder, “You ever heard of a little place called Pa Tahae?”

Thank you so much for reading! If you like this universe and these characters, check out spacetrippingbook.com for news on the upcoming novel!