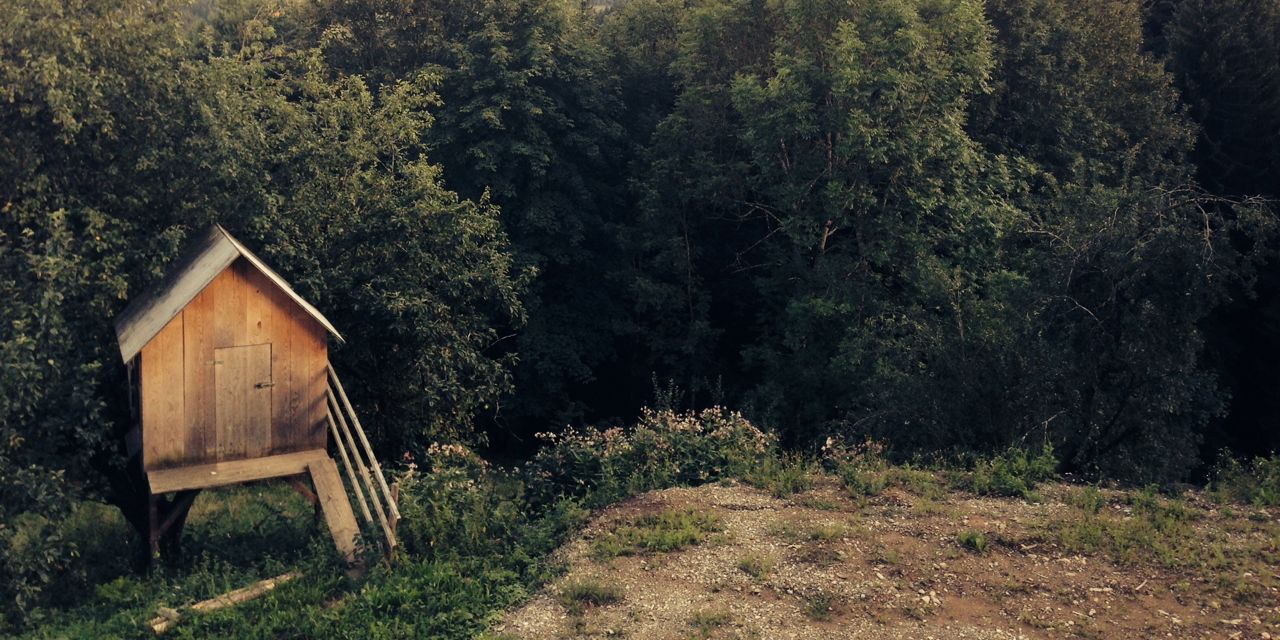 Fully eclipsed amongst the vast coniferous wilderness lay a shadowy log cabin. Its exterior walls crudely fashioned from the surrounding forests collection of rotting logs, each eerily displaying long strips of cascading bark, resembling the look of flesh torn from the bone. The triangular roof is made of plywood and the inner walls are lined in sheets of weathered, barn board. Two gleaming white, vinyl windows stand out amid the spooky backdrop of the forest. From the outside there is a wooden door, but from the inside it is nothing more than splintered plywood and layers of chicken wire. Every nook and cranny of the interior is carefully caged in so that not even a mouse may trespass. The only furnishing in the cabin is a single wooden writing desk that sits nudged up against an overly stubby tree stump in the centre of the room. Together, the desk and stump oddly complement the khaki coloured dirt floor.

The relic had been built long before the man discovered it, and transformed it into his now solitary cage.

It had been five months since the man had fled the city. His tattered and stained clothes now hung from his grotesque and withered frame. Each protruding rib conveying a stark reminder of the hardships he faced against his greatest tribulations.

The days effortlessly sped into terrifying nights, consumed with only angst and utter despair. It was the blackened void of night he knew, when death preferred to claw and chew.

In those eternal moments of darkness the man began to discern that his fundamental views on reality were slowly fading away. The vivid hallucinations had become more and more frightening with each and every night.

By dawn he would often be frozen in place, strangely perched on the cusp of the tree stump looking like a deranged parrot. Listening intently to the sounds of nature chirping in arrogance into the rising sun.

Feverishly with great apprehension and overwhelming anxiety, the man had now begun to carve tiny letters into the wooden desk top using his brittle and broken fingernails. He had started this act in a desperate attempt to distract himself from the awful horrors that were now consuming and clearly devouring his mind.

But there was a method to his madness. It was there, in his mind, cached away in the immense depths of his thoughts, somewhere beyond the smoke and mirrors of insanity. He knew he wasn’t just carving his story out of pure delusion, but more to provide a glimmer of hope that someone may learn from our final fray.

His finger tips would bleed raw as he wrote, his emotions at times would become so overpowering and uncontrollable that he would violently twitch for many hours on end. He feared if he couldn’t contain the twitching he would not be able to finish his carving in time.

By now the endless gnawing and unnerving scratching that constantly encompassed him, filled him with a sort of wild eyed dread.

The burning notions of experiencing the feeling of being eaten alive now weighed unbearably heavy on this man’s fragile mind. For the man, he knew what darkness brought with it and the beasts lurking just beyond the cabin walls.

“I write this in dire hopes, that a future generation can learn from mankind’s rudimentary mistakes. The year is 2025, and as far as I’m concerned the human race is on the verge of extinction. I am simply left to franticly scribble this down, because I fear that I may be the last one left to coherently tell the story of mankind’s final days.

Many of the ignorant had labelled it, as Mother Nature’s cleanse. My assumptions, on the other hand are that she’d had enough. Enough of us poisoning her oceans, enough of us slaughtering whole species and certainly enough of us pretending to play god. After all the destructive damage we had inflicted on her, I strongly think she had no choice. Foolishly we had all lost our common sense and moral compass somewhere in the chaos of biting the hand that fed us.

Mother Nature and planet Earth for that matter, is to be respected, not conquered and controlled. Although, through the centuries and leading up to this dramatic end, we as humans had quickly transformed ourselves into a sickening cancer, leaving Mother Nature to fight back to ensure her future survival.

When the final day had arrived, it wasn’t what you would you’d think either. There was no crippling hurricanes, or any sign of deadly plagues and not even an astroid threat. We would have surely seen those things coming. What our dear old Mother Nature had in store for us was by far, and well beyond the realm of our darkest nightmares. To put it into perspective, picture every creature to essentially walk, slither, crawl, swim and soar the Earth as now lusting for the metallic taste of human blood.

Within a few short hours, the main cities turned into gruesome blood baths. Innocent looking animals suddenly turned ferociously vicious, every one of them developing a bizarre and twisted urge for revenge. Everything from rats, cats, dogs and even fluffy rabbits and stupid pigeons. In these creatures minds and many more, it was now open season on us humans, pay back for all our barbaric animal cruelties we had inflicted. This was Mother Natures war and in the blink of an eye we were now her helpless combatants.

Maybe, if we would’ve had some kind of warning then we could’ve properly defended ourselves. There was just no time for us to react. Instantaneously every human being on planet Earth was left fighting to out live the most frivolous of creatures.