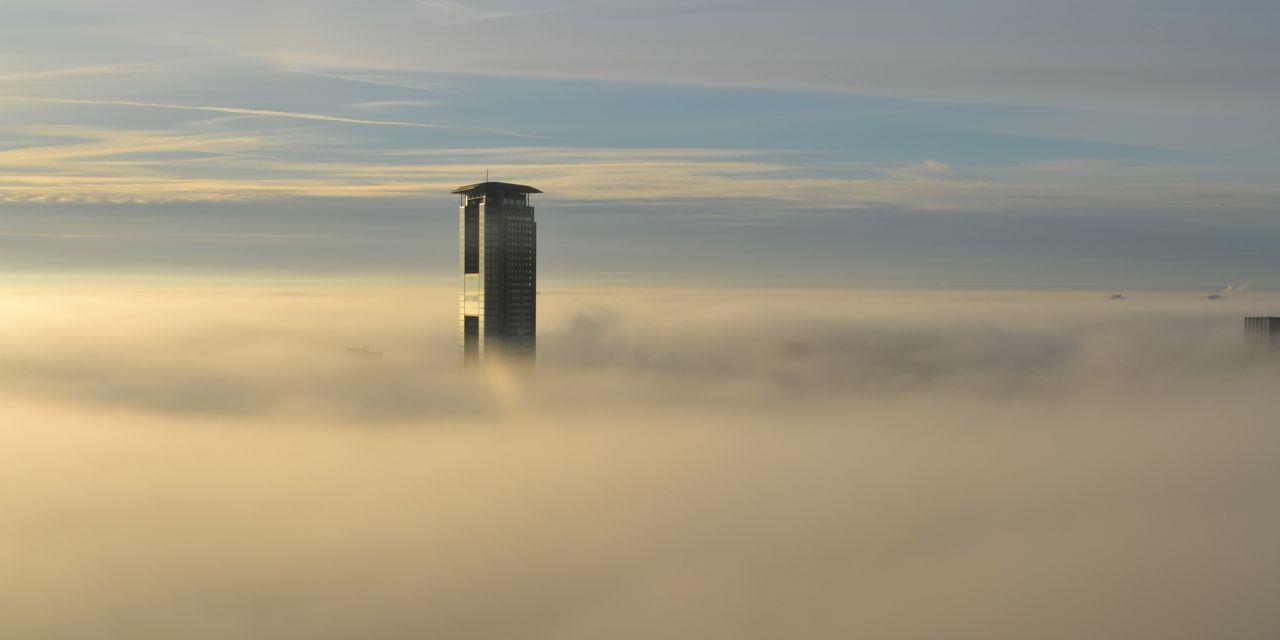 “The question caught me off guard. I didn’t recognize the voice. I turned to look at the man that questioned me. ‘Excuse me?’ As I turned I realized I wasn’t able to focus on the man’s face, but I knew it was there. I knew what it looked like, too, even though I couldn’t make it out.

“He spoke to me again. ‘You are dreaming aren’t you? You made this?’ He looked around at the boardwalk we were standing on. People walked passed us, unconcerned with our conversation.

“I took a second to think about his question this time. I couldn’t tell you what I was thinking about before he came up to me and, now that he brought it up, there was a certain oddness to the day. I looked down at the railing I was leaning on and felt it. The wood was old and rough, splintering beneath my fingers as I ran them slowly over it. This was too real to be a dream.

“‘You were the only one looking at the waves.’ I turned back to the beach. Nobody was on it. The man took a step toward me. ‘Sir? Who am I?’

“I woke in my flat, transported from that distant place. I had to look and make sure it was the 4th. I was a little surprised that it was.

“Analysis: my dreams do indeed continue to get more vivid, to the point where they are almost indistinguishable from reality. I was approached last night. This man spoke to me but not with the typical reactive nature that most conversations in dreams consist of. He asked me questions. He asked me an existential question. I don’t know the meaning of this or its significance.”

I closed out of the dream journal and thought on the subject for a while. Perhaps my subconscious was just creating more vivid and realistic worlds. I decided to stop dwelling on nonsense and start the day. I looked out the window at the January snow falling to the streets below.

I walked out of the room past the magnetic shielding to continue my work. The capacitors in the nanobots residing in my brain allowed for twenty minutes of operation outside of the magnetic field. Every twenty minutes I would take a break and go back into my bedroom’s B-field and recharge. I was working on a solution for that problem.

That work got easier every day. The nanobots increased the connections between my neurons and the artificial electrodes. I was the only person with the means and will to attempt intelligence amplification, and little by little, I was becoming the most intelligent person the planet had ever seen. The computer power of my brain in just the early stages of my development already far surpassed anything anyone had seen.

I was working on a new generation of nanobots that would be powered by the electrolytes in my blood. This would take away my need to be tethered to my flat and the magnetic field inside. I could go back down onto the streets and walk around. I was originally going to use a piezoelectric membrane on the nanobots and pump ultrasound into my brain. But that was before I had my upgraded prefrontal cortex and was able to make electrolyte-powered nanos possible.

“I found him again. I was able to find the same boardwalk. The dreams are getting longer as my computing power increases; it felt like I waited for days on that beach. I’m looking at the data now and yes, it was equivalent to six days. After all that time on the beach he finally approached me from behind, just as he did the first time.

“It had been days. I had given up on seeing him again, so the second time caught me off guard as well. I turned around to the voice. ‘Excuse me?” As soon as I saw him I recognized him. He had soft, hazel eyes and brown hair, something I only knew before but could see now. He stood up tall like he was forcing himself to do so, like he was mustering up the courage to talk to a childhood hero and putting on a brave face.

“‘You are dreaming aren’t you? You made this?”

“‘Yes sir. I live in that house over there.’ He pointed to a house just beyond the boardwalk. ‘I like to watch the waves. You’re the only other person that does.’

“‘Is this the first time you’ve spoken to me?’

“‘Yes sir. It took me a few days to work up the courage.’ Shame seemed to subtly slide across his face as he admitted that.

“And then I woke. The bastard wasted too much time working up his courage. Again I had to look at the window and make sure it was April 11th. Indeed only one night had passed.

I got out of bed and readied for the day. It was my biweekly adventure down the tower and into civilization.

The puddles splashed beneath my feet as I walked the two blocks to the store. People snapped pictures of me as I passed them on the sidewalk, but I paid them no mind. Being amongst them was as good as interaction for me. I would try to keep my sustenance gathering to as close to twenty minutes as possible. I couldn’t afford to lose any time on my progress. Rather, I didn’t want to. I made it quick and grabbed the essentials. Whatever I missed could be acquired by an assistant and brought to the top of the tower.

“As I progress, the dreams are more frequently playing like simulations that I observe rather than participate in. They are still impossibly long. I watched a family live their lives for years last night. The dreams appear to be growing by a few percentage points per day as the nanobots increase the neurological connections.

“This brings in to question the ethics of my undertaking in to amplified intelligence. These beings in my dreams are clearly sentient, albeit simple, creatures. They question their existence and meaning. When I wake, their simulation ceases, and with it so does their existence. I give them life and then take it away.

“But all in all, they are an annoying byproduct of my goals. They would have no existence at all without me. I shall have no more empathy for them.

“As electrolyte-powered nanobots near printing, I am ready to integrate the BASCS supercomputer system into my nervous system. Coupling my brain with BASCS will give me an astronomical amount of computing power. I don’t know what life will be like after.”

Time is irrelevant there is only information.

“I have awoken for the first time since being coupled with the BASCS. Much like before, my dreams ran like simulations, but this time on massive proportions. The shear amount of data collected has been enormous. I have run a simulation of an entire universe, although much simpler than the one we live in.

“I believe my subconscious guided the simulation. The reason I believe this is because life only formed in one of these countless star systems, and, as it evolved, many of the species that arose exist here in the real world. Including us. They were by far the most fascinating things to come out of this simulation, this dream.

“Whole civilizations arose. They were self-questioning, inquisitive, inventive. They called themselves man, human, or homo sapiens and their planet on which they lived Earth. I could interact with them, but I enjoyed observing from afar.

“They discovered much about their universe. Even to the point where their instruments could see to smaller levels than my simulation’s physics could allow for. Their work was admirable but now I am awake, and they are nothing.”

I stood up and walked out of the B-field into the lab. I deleted the plans for the electrolyte nanobots waiting to be printed. And watched the first snow of the winter fall onto the streets below.