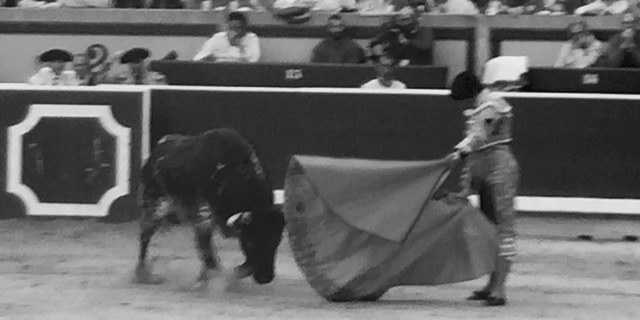 Mind you, this piece of cloth is a capote, a sort of cape, weighing between seven and nine pounds. It is the primary tool of the torero. Magenta on one side, yellow on the other. So stiff and heavy, it can, if placed just right, stand on its own. And though this so-called bull is nothing more than a one and a half year old calf, a baby, really, it is still an unsettling experience to have it charge at you full speed with intentions to hurt and kill you. And hurt (if not kill) you it will.

Returning to the first point: the calf’s speed. A one and a half year old calf, or vaquilla in Spanish, is still larger than a Great Dane. And much, much faster. When you get it to charge, it’s on you so quickly that you only have a split second to decide what to do with that heavy piece of cloth. If you are, like me, at a small ranch (called a ganaderia) somewhere is Spain, or Mexico, or Peru, you have received exactly ZERO training.

What do you do with this heavy piece of fabric? Well, while pondering that question, the vaquilla lowers its head, and slams full speed into your crotch. If you are lucky, and knowing not what else to do, you put your hand on its head while it bucks wildly, its short horned head ramming repeatedly between your legs. If you are unlucky, as I was, you will be knocked clear off your feet and onto the ground while this tiny (200-pound) wild cow attempts to drive one of its horns into your spleen.

There is much hilarity. The Spanish boys who work the ranch laugh good-naturedly at your expense. They lure the vaquilla away, pick you up off the ground, and place you on your feet. Then, and here’s where things really get fun, take the capote away. The capote, ineffectual as it was while in your possession, was also your only source of defense. It’s weight reassuring, it’s color dazzling.

“Recortar,” says one of the boys.

He does a funny, hip wiggling dance. Then repeats the word: recortar.

As you ponder what this might mean, the boy edges away, the vaquilla charges, and head-butts you in the crotch again. You try to hold its bucking head, while the ranch boys lure it off of you with the capote. The same capote, mind you, that was once in your possession.

You decide to retire to the burladero (a partition designed for toreros to seek shelter from the bulls) and watch the Spanish boys do it. The first boy uses the capote to lure the bull to charge. He performs a series of veronicas (a graceful two handed pass with the capote.) They are not Enrique Ponce veronicas. But nor do they look like Drunken American Waving Beach Towel at a Cow veronicas either. The kid knows what he’s doing. He follows this with a series of chicuelinas (A shortened pass in which the torero wraps the capote around his waist as the bull passes.)

He waves another member of your tour group on to the sand. To your relief, this man performs no better than you. He soon finds himself on the ground, the vaquilla on top of him. The tourist departs with a bloody nose, a ripped shirt. Good thing we signed that waiver.

All that are left are the Spanish boys. One of them jumps up, runs in a half circle. The vaquilla charges. You think: oh, he’s not going to make it. At the moment of impact, the boy pauses slightly in front of the charging vaquilla, fakes to his left, and arches his back as the vaquilla digs its horns at him. But the boy is quicker, and smarter, and the vaquilla misses, and the boy is gone. Others jump over the vaquilla. One boy does a front flip. This is what it is to recortar.

I’m supposed to do a front-flip?

The first boy, the one with the graceful veronicas, comes over to the burladero in which you are hiding and says, “Your turn.”

You take a deep breath, and step out onto the sand.