Ars Melodia – after Devil We Know by Lily & Madeleine 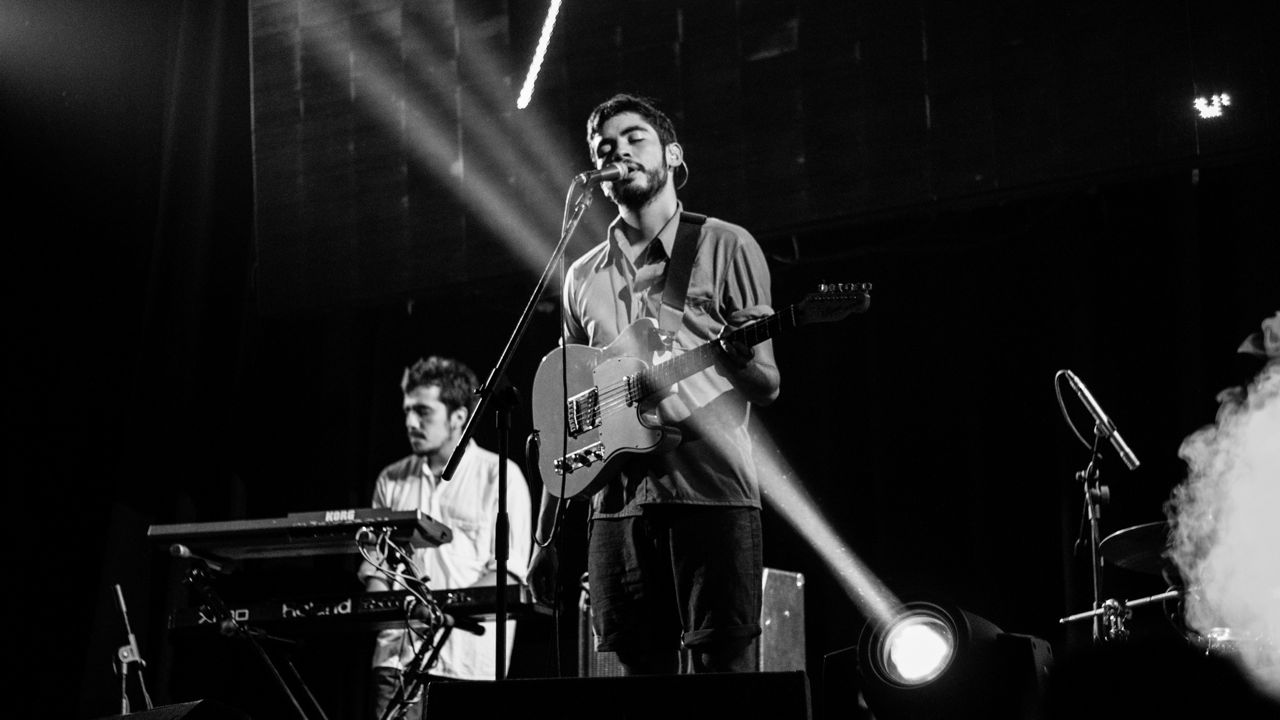 I think the morning before Knoxville is when we finally know, or at least when we can finally admit we know. Whatever’s been building these four months, whatever silt has been piling up in the bottom of our lungs, that’s the day we both feel it for the first time: it’s over. We wake up in the Volvo—me with my cheek pressed against the corner of an amplifier, Kenny with the imprint of the parking brake in his back—and we look out through the fogged-up windows at the Tennessee sky, and we both just think, fuck. Fuck.

We left home in December; now it’s April, early spring in the South. The kind of morning that manages to chill you without actually being cold. Kenny and I lie there, each of us knowing the other’s awake too but neither of us saying anything. We stare up at the car’s ceiling, the ripped foam, the cigarette burns. Kenny draws his jacket up around his shoulders and lets out a long breath. I’m genuinely trying to figure out what day of the week it is. We only plan in terms of dates now: Knoxville, March 8th; Greensboro, March 7th; Blacksburg, March 5th. I don’t know if it’s Sunday or Tuesday. When was the last time I did? I can’t remember, and it makes me feel like I’m riding a merry-go-round with no hands.

From the front seat, a long groan of weariness. “Man,” Kenny says, and nothing else. It’s maybe the most eloquent thing either of us could say right now.

Five minutes pass, ten. The rain starts up again, fat drops pelting the gray-black square of the sunroof. I watch them, carpet bombs against the glass, and I know that Kenny is looking, too. It slackens, then crescendos, until it’s the only sound in the world, until I can almost believe, in my half-asleep-again daze, that this is all that life has ever been, just a single, long, unbroken day in the Volvo, mournful Southern sky and the endless patter of a storm. If I sat up, I think, I would find that the water level was up past the tires, that we were adrift in a flood, floating in an ark built for two.

Kenny groans again, maneuvers his body onto his side so that his face is buried in the back of the driver’s seat. “How much farther till we get there?” he asks, voice muffled through the leather.

I shrug, as though that might help. “Two hundred miles. I don’t know.”

“Are we gonna get breakfast?”

“We don’t have money for breakfast.” This is my charitable way of saying we just don’t have money, for breakfast or gas or anything else. The show tonight is at Boyd’s Jig and Reel, and we’ve never played that venue so I don’t know if we’ll get forty bucks or four hundred. If it’s either Tuesday or Sunday, whichever, the crowd will be small. Most likely we’ll make enough to keep from getting stranded between gigs, which is about as much as we can hope for these last few weeks. If we’re lucky, the bar will feed us, or maybe some especially generous (and drunken) kids will take us out for Waffle House after the show. If we’re not, we’ll drink free beer and rainwater, eat peanuts from the dishes on the tables or the remnants of hamburgers from the dumpster out back.

Since we don’t have to be there until 6 PM, and Tennessee is a state where we know exactly zero people, we have all the time in the world. It’s the one resource in which we enjoy an embarrassment of riches. So we lie there a while longer, maybe sleeping, maybe not. I’ve stopped noticing the difference half the time. Something like an hour passes, and then we get up, put our shoes on. Kenny doesn’t so much move to the passenger seat as slide into it, like water sloshing to the other end of a bucket. I open up the door and get in behind the wheel. I was wrong, I think—there is no flood, although the street is glossy wet, and even the few seconds I was outside were enough to dampen my neck and the ends of my jeans.

We start back up I-40, rubbing our eyes, finger-combing our hair in the rear view mirror. Kenny pulls out a bottle of Kamchatka, the one we were working on last night before we pulled off at an overlook to crash for the night, but it’s almost empty. If it were milk, it wouldn’t be enough for a bowl of cereal. He takes a politely modest swig, hands it to me, and I do the same. Then he replaces the cap and packs it again, like we might have a use for it later.

“This is the last show,” I say, and for some reason this doesn’t feel out of the blue to either of us. It might seem incorrect, at its surface, because in fact our tour dates extend all the way through late May, will take us as far as Arkansas, Missouri, Texas. But it doesn’t matter if it’s correct, because it’s true. And we both know it. We don’t even have to debate it, don’t have to weigh the pros and cons, don’t have to run the numbers. It’s a statement of natural fact. Gravity pulls the clouds down on us, the Appalachians are 1,500 miles long, and after today, we will never be musicians again.

“Home,” Kenny replies, and I think of Simon and Garfunkel. Home, where the music’s playin’. Except when it’s not. “That’ll be nice.”

“I’m glad we did it, though,” he says, taking the cigarettes from the console between us. Later we’ll stop and boil rainwater on the engine, make coffee with a filter and an aluminum flask, and I’ll have one with him then. But not now, not by itself. Some habits can die, but others never do. “Are you glad? That we tried?”

I almost answer him, almost, but whatever words I could spare for it are attached to the thing itself, which is already nearly gone, left at the overlook several miles back. All I do is turn on the radio.