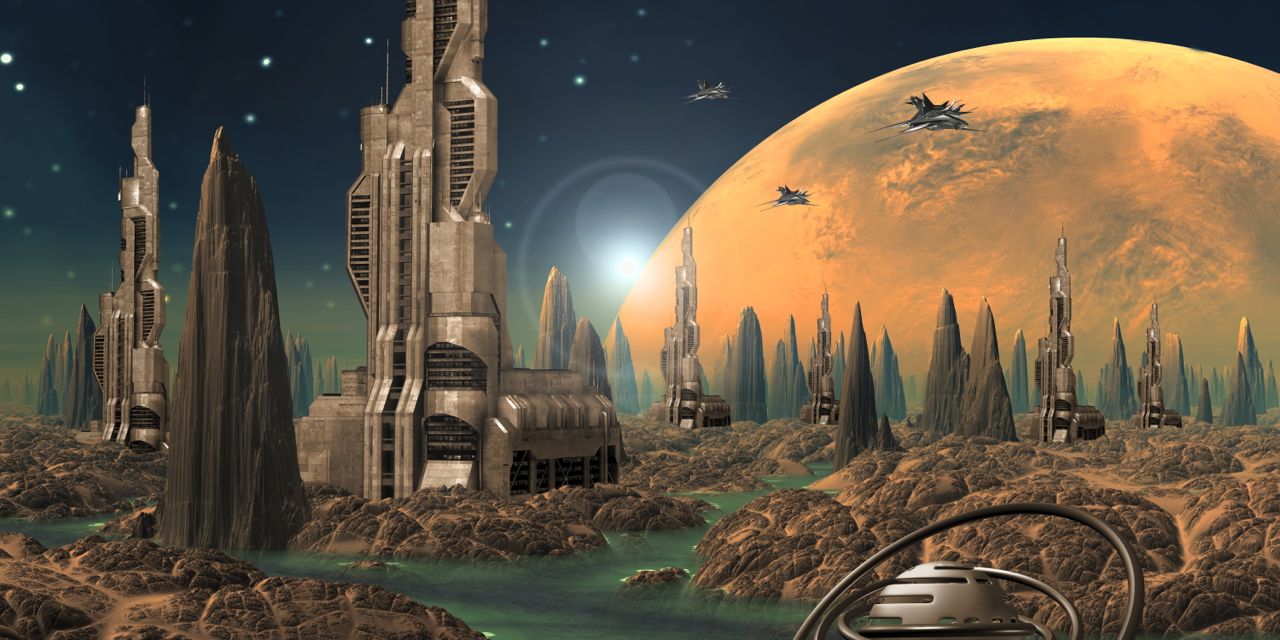 Jorwei adjusted the shoulder strap of his new electric shotgun as he stepped into the cool evening breeze. He walked across the street and leaned against the guard rail. Stretching out before him was the endless ocean that covered the planet Roqua.

A few hundred mountainous spires, daring to break the ocean’s surface, comprised the totality of Roqua’s dry land. An eternity of watery erosion left massive coves, surrounded on three sides by sheer rock, within many of these spires. At the center of one such cove, built directly into the cliff face, was the city of Pa Tahae. Was it a cesspool of crime? Was it the universe’s only truly free city? Did it actually exist, or was it just an underworld myth? It all depends on who you ask.

Jorwei hung his head out over the edge of Pa Tahae’s Level 7 and looked down, past the six lower levels, to the crashing waves, some miles below. He looked up; an outcropping on Level 9 prevented him from seeing the city’s apex at Level 13.

“Waiting for someone?” asked a velvety voice.

Jorwei glanced to his right to see a middle-aged Puzuru male. His motley skin was a muted mix of cream and off-white. His head was cleanly shaven, and he wore a nondescript tan robe.

Tyrei returned the nod, and then noted the weapon slung casually over Jorwei’s shoulder, “I hope you didn’t kill someone for that.”

Jorwei gave a minimal shake of the head, “It’s a gift. The man was so impressed with my game skills, he gave it to me as a bonus.”

Tyrei narrowed his eyes skeptically, “I’m sure he did.”

Jorwei spit out over the railing.

“You come down here to teach me manners, Tyrei?”

“You weren’t answering my call to your data bracelet.”

“You couldn’t take a break from your coin hustle to talk to family?”

Jorwei whirled on him, “We’re not family. Our mothers had the same father. That’s all.”

“In most cultures they call that family.”

Tyrei clasped his hands behind his back, “I have work for you. It’s off world. High risk. High pay.”

“No need for vulgarity. Your cut would be thirty thousand. As for the risk? I’d rather let the crew leader explain.”

“This crew is looking for a permanent addition. If things go well, you could be seeing that kind of money on a regular basis.”

Jorwei narrowed his eyes and studied Tyrei’s expression, searching for some hint of a lie. As per usual, Tyrei’s face betrayed nothing. Finally, Jorwei asked, “When do I leave?”

Jorwei took another second to gaze out across the dark blue expanse. He looked back, “Let’s go.”

After a quiet two minutes, they found themselves at the edge of the bustling Blue Bazaar. Level 7 housed more ship hangars than any other level in Pa Tahae, which meant it’s where most new arrivals landed. This, in turn, attracted hundreds of unlicensed merchants, all more than willing to help separate visitors from their hard-earned Tahlians. Every vendor table in the market enjoyed shade from blue awnings, thus earning the Blue Bazaar its moniker. An awning denoted that the proprietor underneath it had paid for the “protection” of The Maven. Those merchants without blue awnings learned quickly the hazards of running an unlicensed unlicensed establishment.

The pair made their way through the crowd to an alleyway, where Tyrei pressed his palm into the sleek surface of a steel door. It slid open, revealing a brightly lit warehouse. Crates and containers were scattered about in disorganized fashion. A female Vegemin, whose body looked like a thousand leafy vines had braided themselves together to form a humanoid shape, leaned next to a door on the far wall. She opened the door as Tyrei and Jorwei approached, and followed behind as they entered. Two figures sat at a table in the room’s center. One was a fellow Puzuru. His camouflaged skin was a mix of crimson and white, and his blood red hair was slicked back. He stroked his red goatee as he sized up the new arrivals. The other was another Vegemin, but unlike the first, he was male and looked like a long stalk of broccoli with arms and legs. Jorwei’s attention, however, was more focused on the female Puzuru lounging on a nearby couch. Her skin tones took on a violet/white pattern. She was at least fifteen, possibly twenty years older than him, but a knockout nonetheless. She didn’t look up, seemingly more interested in whatever was displayed on her personal tablet screen.

The Vegemin who’d let them in the room brushed past, grabbing a seat at the table. Tyrei spoke to the male Puzuru, “Deilan, this is Jorwei. His abilities are more than sufficient for the task at hand.”

Tyrei nodded to the female Puzuru, who had finally looked up. She returned the nod and went back to whatever she was doing. Tyrei turned to leave, whispering to Jorwei as he went, “Play nice.”

Jorwei sauntered over, dropping himself in the remaining chair. He addressed the Puzuru man, “Deilan, was it?”

Deilan leaned forward, “For real?! You never heard of Deilan the Devil?! Most wanted in a dozen systems! I’m the rawest rip-n-run man this universe ever seen!”

Jorwei shrugged, “If you say so.”

Deilan slammed his hand down, “I did just say so! Aren’t you listening?”

Jorwei nodded to the two Vegemin, “So, do you have names? No wait, let me guess… you’re the infamous Chlorophyll Crooks!”

The vine covered female spoke in a rasp, “Syl.”

The stalk of broccoli bellowed, “Cabby”

Jorwei drummed his fingers on the table, “Well aren’t you a talkative pair,” then to Deilan, “So, what’s the plan, man? Who’s got the brains… the cranium? Or…” he smiled, “is that why I was brought in?”

Deilan stood up, “You calling me stupid?”

“That’s enough, Deilan,” called a voice from the couch. Deilan furrowed his brow and sat down. Jorwei watched as the Puzuru woman carefully poured an amber liquor into a glass, then swirled it for a few seconds, before finally taking a sip. She got to her feet, and strolled over. Her lips spread into a pleasant smile, “I’m sure our new friend meant no offense.”

Jorwei shrugged as if to say, “maybe, maybe not.” She either hadn’t seen it, or was pretending as such.

“What do you know of this neighborhood?” she asked.

“The Bazaar? A bunch of weird-types selling obscure trinkets… controlled by some other weird-type calling himself The Maven.”

She smiled again, “Nice to meet you.”

Jorwei made no attempt to hide his surprise, “You’re the Maven?”

“In this room, I go by Merci Themor. Out there,” she waved a hand towards the door, “I’m the Maven.”

Jorwei recomposed himself, “Well, congratulations on all your success. You want to tell me why I’m here? I’m not exactly interested in selling wares…”

She took another sip from her glass, “My operations have grown to a point where it is no longer economical to deal with smugglers on a piecemeal basis. I need my own crew to run regular swipe jobs.”

Jorwei arched an eyebrow, “And we’re it?”

Merci smirked, “Not exactly. Think of this as a trial run.”