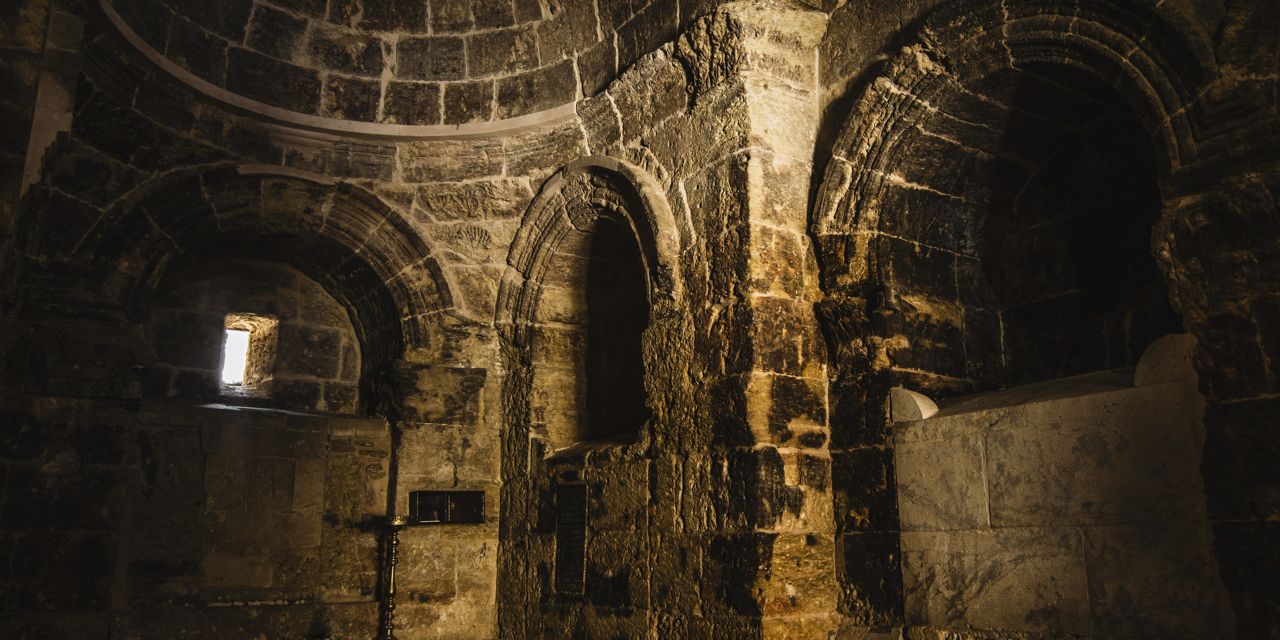 The bright fluorescent light of James’ lantern pierced the darkness of the ancient catacombs, buried in the deepest corners of the Vatican. Books lay scattered and rotting among piles of dust, an insult towards the collected history of the clergy spanning centuries. Never the less his heart fluttered with excitement. This was an opportunity denied to so many for so long. He creeped carefully across the room to another door with a large wrought iron lock. Fumbling through his pockets, James searched for the key entrusted to him by the Bishop. For the first time in days the key was able to unlock a door. James excitement was barely contained; he had finally found the denique locus. The final room.

The lock turned roughly, unused for centuries. with a great effort I was able to unlatch the lock and enter the oldest library. the room was smaller than I expected, perhaps nine square meters. A lone desk, fitted with an ancient quill pen long deprived of ink sat opposite of the door. Two long rows of bookcases sat stocked to the brim along the adjacent walls. This was a treasure beyond wealth. The knowledge here spanned the entirety of the Catholic order, collected from Scandinavia to Sinai. Most of the languages were far beyond my comprehension.

He was not intimidated however, the journal he was searching for was transcribed in old english, mixed with hints of welsh. This was probably the only time in history when a doctorate in late middle age linguistics of England would actually be useful. James had laughed when he was approached by the Archbishop of Cardiff. He didnt even know there were any catholics left in England. Apparently, “I was the only man for the job, Lutheran or not.”

His mission was simple really. As the Archbishop explained, “Every day I look around the world that surrounds us. Disease, corruption, Jihad, the youth have begun to deny the church entirely. The world descends always further into darkness. The times of the great apostles is far behind us. What has become of the days of the Pious, miracles, and brotherhood that unites the children of God? He has not abandoned us, I know that for sure. But why has he left us to decay so long? I know there must be answers to my questions, and I know where those answers lay.” Four days later James had left for the Vatican, mysterious key and an order for full cooperation by the clergy in hand.

Slowly, with great care he browsed the books in the room. To his surprise, the journal he had been looking for was the third document he inspected, almost as if it wanted to be found. He reminded myself not to get caught up in the mysticism of this whole ordeal, he was a scholar after all. Sitting himself on the wooden stool complementing the desk, he began to decipher the ancient journal.

I have arrived in a new village, this one drenched in suffering. I had heard before of this place. Most men here have followed the rule of the pagans, but not all. The church had reached here not but a few years earlier, there were saved souls left to comfort. My work will begin again tomorrow. I rest tonight in the shade of a great oak

James’ interest peaked, this was definitely the journal he had been searching for, the travels of friar John of London. To his disappointment the next few entries had been water damaged, completely unreadable. He continued a page later to the next legible entry.

As I leave through barren fields my suspicions are confirmed. He had indeed been here. I believe I had missed him by not but a few days. I will find him soon, this devil will not escape the will of the lord. His kind can not ruin this world forever.

Again, more entries had been destroyed by the cruelty of time. Not everything word was smeared into oblivion. A scattered verb, an adjective or two here and there. But one word seemed to never fade. Him

I have found a dying man stretched out longingly towards his dead children. It was a sight that stirred pity deep in my soul. It was clear to me, he was not a man deserving. I came to his side, offering him wine and cool cloth. He rejected these comforts with angry dying eyes, there was something about him that defied the world. He would not die, his passion denied the disease. I blessed him to the Lord, the only comfort he would accept. As I left he muttered to me but a few words. “He wears the guise of a doctor, of this I know. He is not a man, but a herald of death.” I prayed with him as he faded

James was discouraged. None of this was even remotely relevant to the answers he was looking for. Still, he couldn’t help but keep reading. The knowledge that had been lost for centuries called out to. It was intoxicating. James figures the friar was definitely on to something. The entries continued

I have seen him, off on the horizon. Tomorrow is the day.

The calm and academic demeanor of the writing began to change. It seemed like something had changed the friar. Something more than significant had happened to him. James figured the friar John must have met ‘the man’, possibly confronting him in some way. He didn’t know why but he was almost compelled to keep interpreting, discovering the fate of the John of London was the most important thing in the world. The next entry was panicked; scribbled with a heavy hand. A chill rolled down James’ spine, a palpable sense of dread had entered the room. He almost felt scared.

His words rang true, theer is no lie. The dead angel spoke in the dirty fomr. The Lucifer hiis lord. The great sinning begin. Evil souls collected, in the pit. twisted bent, solders of darknes, the Enemy buildss teh army of Revelations. End time begins

James sat back and exhaled heavily, casting a cloud of condensation. He had not realized he had been holding his breath. If the good friar was correct then something terrible, apocalyptic, had occurred. The Bishops question was left unanswered, but that no longer concerned James. The good friar had described the rising of Lucifer.