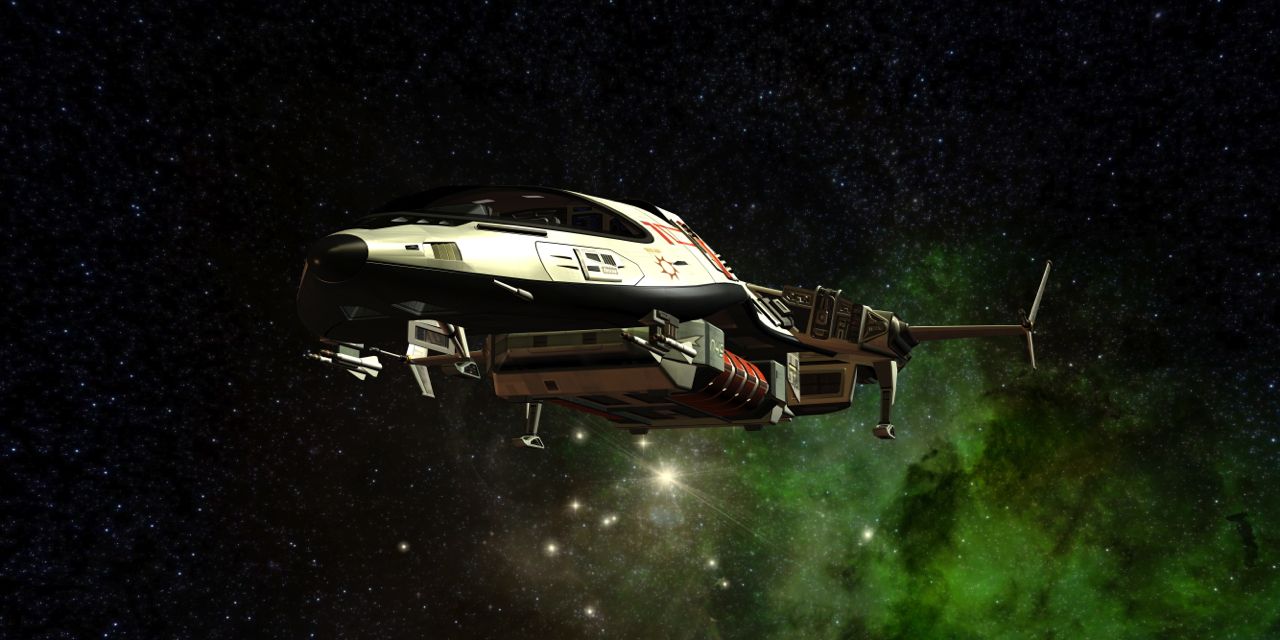 The first few days of travel had been relatively uneventful. They had hit the first anomaly jump without issue, and were now about halfway across the Dayukon star system. Jopp was at the helm, with Loi lounging in the chair to his right. She looked up from the popular gossip feed on her tablet, “So, is piloting this ship very different from others you’ve flown?”

Jopp shook his head, “For the most part it’s the same. It just takes a little extra control when navigating tight spots.”

She nodded, “Oh,” and looked out the front view screen, “So where are we again?”

“We’re about midway through the Dayukon system.”

“Doesn’t this system have a small anomaly cluster?”

“Yep, and unfortunately, none of them take us where we’re going, which is the far end of the system. We have to cross it the old-fashioned way.”

“How far away is the cluster?”

Jopp glanced over, his eyebrow raised suggestively. She laughed, “No, I mean a real nap. You can still join me though.”

Jopp sighed, “Can’t. I need to stay up here for at least another hour or so. Once we’re past the debris cloud, I can run auto-fly for a few hours.”

Loi stood and stretched. Jopp whined, “Oh c’mon. Don’t tease me like that.”

She kissed him on the cheek and left the control room.

It was a little over an hour later when Jopp heard a voice from behind him coo, “Hey there.”

He turned around to see Loi wearing considerably less clothing than she had been earlier. She smiled and held up a large blue bottle, “Care to join me?”

Jopp grinned, “Your timing is perfect. I’ve got a good six or seven hours until I need to be back up here.” He walked over and scrutinized the bottle she was holding, “This is some nice waina. What are we celebrating?”

Loi smirked, “You haven’t exactly struck me as someone who needs a reason to celebrate.”

“Good point,” agreed Jopp. He followed Loi back into the housing cabin, where they plopped down on one of the couches. Two glasses were already waiting for them on the table next to the couch. Loi popped the bottle of waina, and poured an orange liquid into the glasses. She handed one to Jopp, and then raised the other up high, “A toast.”

“A toast to what?” asked Jopp.

“How about to you?” she answered, “You’ve been so great this whole time. I don’t deserve you.”

“Nonsense, you totally deserve me.” A sly grin spread across Jopp’s face, “But, I am pretty awesome, aren’t I?”

Loi smiled again. If Jopp had been a bit more discerning, he would have seen that while her mouth was smiling, her eyes held nothing but sadness. But Jopp was not the discerning type, so he held his glass aloft and proclaimed, “To the best damn pilot in the universe.”

He downed the glass’ contents in a single gulp and wiped his lips, “That’s some good stuff.” He noticed that Loi had set her still full glass back on the table.

“Don’t you like it?” he asked her. She didn’t answer. Then Jopp’s vision started to get hazy. He blinked a couple times, and dizziness washed over him.

Jopp’s eyes fluttered open to an incessant beeping sound. He scrambled to his feet, and scanned his surroundings. Everything was still a little foggy, but he saw a flashing red button, which he assumed was the cause of that infernal beeping. He made for the red light, and tripped over some kind of box. After pulling himself back up off the floor, he completed his short trek to the flashing red button, and slammed his palm down. Mercifully, the beeping stopped. His vision started to clear, and he again attempted to assess his environment. He was in a small unfamiliar control room. He looked down at the console. There was a label next to the formerly flashing button. It read “Emergency Beacon.” The control room had no doors, only a circular hatch located in the center of the low ceiling. He peered out the front view screen. He wasn’t sure where he was, but he was pretty sure it wasn’t the Dayukon system. His foot touched something, and he looked down. It was a book. He looked closer. It was called “The Sentient Coalition Official Intergalactic Travel Manual: Escape Pod Edition.”

“The damn dinghy!” Jopp cursed, as he kicked the book. He spun around looking for something else to kick, and saw what he’d tripped over. Resting in the middle of the floor was a case of Flanisi Ale. Lying next to it was a letter.

Jopp spent the next three hours sitting on the floor, working his way through the case’s three dozen bottles. His eyes fell on the shredded remains of the letter. “So sorry,” “can’t understand,” and “no choice,” were some of the phrases that looked back up at him. It didn’t matter. Every single word of that letter was burned into his brain. He finished the bottle he was holding, and reached in the case for another. His hand came back empty. He kicked the empty case away, and struggled to pull himself up. With great effort, he managed to pull himself into the pilot’s chair. The screen was ablaze with alerts and warnings. The words were beginning to blur, but Jopp was able to work out that the pod had drifted into a planet’s gravitational pull. He made a feeble attempt to pull up, but it was too late. He was going to crash. In his last moments of lucidity, he saw the name of the planet flash across the screen.

He grumbled to himself, “What the hell is Earth?”

Author’s Note: Well, that it’s for Jopp… at least until the “Space Tripping” novel, coming later this year! Check out ramblingwaffle.com for details on the release date. And, in the meantime, keep reading the awesome stuff here on Image Curve! Hopefully, you’ll be back in two weeks to check out the first installment of my next Space Tripping Short: “Cosmic Caper”