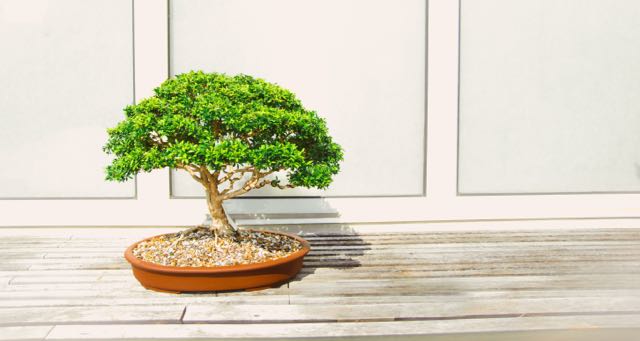 Woke up later than usual at seven. Smiled and went to the bathroom, brushed my teeth. In the kitchen, I washed an apple and boiled water for tea. Poured the water over the loose tea in the metal net and stirred it with a spoon before I let it sit for a few minutes.

I did yoga for thirty minutes listening to gentle forest sounds. Tried to meditate but my sinus was aggravated and I could not focus. I removed the tea leaves from the cup and carried it over to my bonsai tree table. I watered the trees and went out in the back yard to cut the grass.

I went to my car to get my straw hat.

I topped the lawnmower with gas, pumped three times, held the lever, and pulled on the starter cord. The engine started the first time. I did the back yard first, then the left side of the house, then the right, and finally the front. I found an oak seedling in the front yard that has grown from an acorn from our neighbor’s oak. I dug around it carefully and transfred it into a small pot. I watered it well. I found a second seedling but accidentally cut its main root when I was digging around it.

After I cut the grass in the front yard I watered it for ten minutes. We planted the seeds here four weeks ago and they still need a lot of attention and frequent watering.

I went back in and had some more tea. I took a shower and put on some fresh clothes. My brother called. We talked for about thirty minutes. We talked about movies, about some changes to our website we want to make, and about our upcoming trip. A friend had sent me some hiking options and I brought them up. He said some of them are too long and difficult and he does not like them. He laughed. I told him I will take a closer look and pick some that are reasonable and send him a list.

I said the trip is only two months away so we have to start planing it a little more actively.

I send a text message to a friend asking him about his email. Thought would invite him to write brief mindful accounts of his days here.

My wife came back from a charity 5k run for diabetes. She went to take a shower and I started writing this.

I have an ongoing shopping list I am about to update and then go to two or three supermarkets. Then fill up my car with gas and put air in my tires.

By then it will be time for dinner.