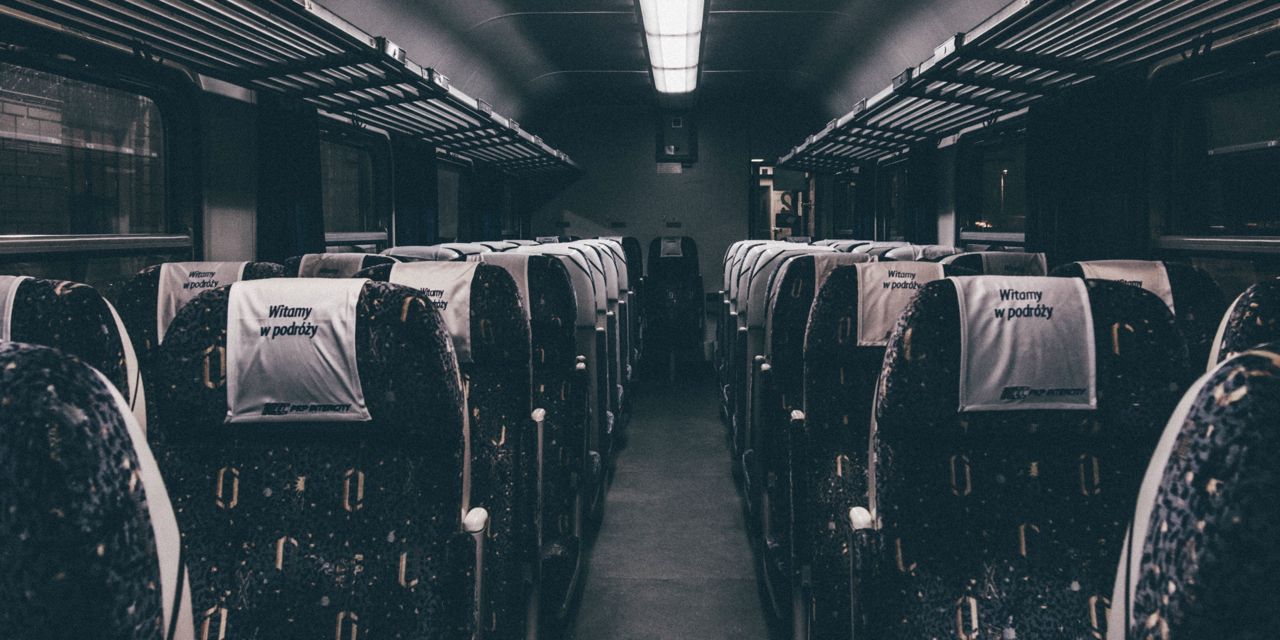 Jess stumbled breathlessly up the stairs, dragging her suitcase behind her, with difficulty. As heavy and cumbersome as a corpse, Jess pulled her baggage over the last two steps and the thing lurched to life, landing on her feet and crushing her toes with its fully rotating wheels. ‘Fuck you,’ Jess hissed, as she held out her hand in mock helplessness to the conductor; a pained expression fixed on her face. He smiled and rushed over to help her. Men were always rushing to help Jess.

‘Thank you so much,’ Jess stretched out the vowels and the conductor blushed at the shapes her brightly painted mouth made.

‘No problem, miss.’ He held her gaze for a moment too long before smiling awkwardly and turning to walk down the carriage.

The air conditioning was on in the train, blowing frigid air that smelled of chemicals steadily down the car. It was mid-September and it was a colder fall than Jess had experienced in many years. She glared at the vent before unzipping the top of her case and wrestling a thick, camel coloured sweater from its jaws.

Exhausted and irritated; Jess abandoned her bag, which was easily half the size of her, near the door and began the search for her seat. Glancing from her ticket to the numbers above the windows she grimaced once she’d made a match. ‘I hate the fucking window,’ she moaned to no one in particular and collapsed into the aisle seat.

Jess threw her Chloe bag under the seat on front of her and stretched out her legs on either side of it. She allowed herself a moment before pulling the bag back onto her lap and fishing around inside for her phone. She fished out and returned various pieces of makeup and a hairbrush before wrapping her fingers around the elusive item she was searching for. She paused for another moment before pushing the button on the top right that illuminated the screen. Jess cringed at all the letters and green icons that littered her screen in the same way the leaves had done to the ground outside her window. All the messages were from her mother and all were designed to provoke maximum anxiety.

Mom: Jess, I hope you’re on the train. He’s not going to last much longer.

Mom: Jess, he’s asking for you, where are you?

Mom: Jess, your brother’s here. Why aren’t you?

Mom: Jess, you’d better be on the train. If he dies you’ll regret not showing up.

Jess’s mouth dropped open upon finishing the last message. That was dark even for her mother. With two fingers she dropped the phone back into the depths of her handbag with disgust and kicked at it a bit.

The whole two-hour train journey was spent chewing on fingernails and thinking of all the reasons Jess didn’t want him to die. She silently pledged her life to a Jesus she didn’t believe in; trading herself to a man she didn’t care about for the only one she ever did.

The train rolled lazily into the station as the vice tightened around Jess’s lungs. She inhaled deeply and tried to focus on anything besides what she was feeling. ‘Five things to see, four to touch, three to taste and two to smell.’ Jess repeated this mantra with intense focus until her breathing regulated and she could stand up. She hauled her albatross of a case out from under the luggage rack and steeled herself against the cold metal chamber that encased the bin before pressing the button to open the doors.

Jess greedily gulped the fresh air and pushed it forcefully out of her nostrils. Searching the crowd she wondered if she was too late.

‘Jess!’ A young man galloped towards her.

‘Mark.’ She whimpered as she reached for him and crumpled like newspaper into his arms.

Mark caught his sister with ease and grimaced at how frail she felt. How easy it was to take her whole weight. He noted that he could count each of her ribs despite the substantial jumper she had on. ‘Shit, Jess, you’re disappearing,’ he spoke into her hair. ‘Are you OK?’

Jess’s eyes were watery and red; she shook her head on her brother’s shoulder. ‘I’m fine. How’s dad?’

Mark ran his hands down the length of her arms, grasped both her wrists and gently squeezed. ‘Let’s go see him, he’s been waiting for you.’

The car ride was as torturous as the train. Jess stared out the window wishing she had more fingernails.

Mark kept his eyes on the road, ‘Mom’s a mess, you know.’

Jess made no attempt to stifle her laugh, ‘She’s always a fucking mess, Mark. No need to alert the fucking press or anything.’

‘Yeah, but this is really bad. You know that dad is really the only person left who can still stand her or that still talks to her.’

‘You do, you fucking goody-goody.’ Jess punched him lightly in the arm as they pulled into a parking space.

Mark turned the car off but stayed in his seat. He remained facing forward and took a deep breath before he spoke, ‘You’ve got to promise me that you won’t make things worse, Jess. You and mom can’t start fighting, it will kill dad. ‘

Jess turned and spoke to the side of Mark’s face, ‘I’m not a monster you know. I know mom says I am and blames me for pretty much everything, including the fucking national debt, but I’m not a fucking idiot. I’ll behave.’ Jess opened her door, climbed out and pushed a pair of Chanel sunglasses up the bridge of her nose with one finger.

Jess turned around, her smile already fixed on her face, to see her mother power-walking towards her, cigarette in hand. ‘Hey mom,’ she held out her arms for a hug, but her mother locked her fingers with Jess’s instead, holding her at arm’s length.

‘Let me look at you darling.’ Jess’s mother pulled down her own sunglasses for a better look. ‘ I see that you’ve not been missing any meals in London.’ Peals of laughter escaped her mother’s mouth and danced with wisps of smoke before disappearing into thin air and Jess’s memory forever.

Jess’s face fell like a failed cake and before she knew what she was doing she’d reached her hand back and slapped her mother across her well-preserved cheek as hard as she could manage.

She watched in fascinated horror as her mother’s cigarette flew through the air like a disappointing firework. Jess observed her mother as she teetered on her heels, looking a little drunk before gravity had its way with her and slammed her, like a mighty, invisible wrestler, to the ground. Her head hit last and made the same sound as so many chestnuts Jess had cracked between wooden teeth at Christmas.

Mark lunged to catch her, but he was too far away. ‘Fucking shit, Jess,’ he shouted, bringing Jess back to life, ‘What the fuck is wrong with you?’ He was on the ground now examining their mom’s face, she wasn’t moving.

Jess shook her hand violently at her side, her eyes were fixed on a point in the distance and her voice was flat, ‘Good thing we’re already at the hospital.’