A Strange Occurrence At The Belmont Motel 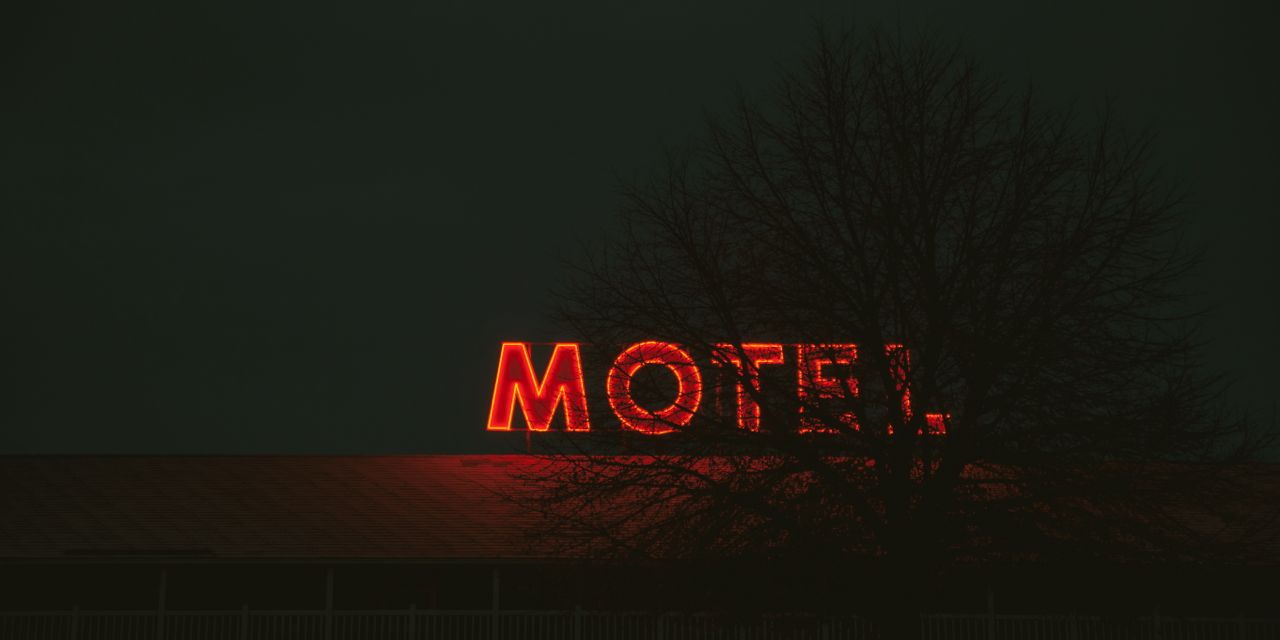 Fred Ferkel’s eyes thrust open to a dim-lit bedroom. He let them focus for a moment on the spinning ceiling fan and then carefully slithered out from the covers like a legless lizard heedful not to disturb his sleeping wife. His late nights spent writing and troublesome inability to sleep for more than an hour at a time had begun to exhaust him, let alone ruffle a few feathers with the missus. He quietly slipped on some clothes, a tight white polo and some tan kakis, before he prowled out from the managers suite into the motels cramped office lobby.

The Belmont Motel was a 21-room, single-level structure just off of MountLloyd Highway in Clyde Valley. A brightly coloured, ’60s-style sign directed motorists to the faded, red-metal roof, which was hidden from — and nearly all but gobbled up by — the looming white pines. The motel’s lobby appeared almost untethered by time and still held the nicotine-stained wood paneling from when it first was built. Outside the manager’s suite was a weathered wooden front desk with an old rotary phone and a kitchenette holding a coffee maker. In the furthest corner of the room a fake plastic tree and an empty steel information rack stood adjacent to a massive picture window, overlooking nothing but raw wilderness.

Fred turned on the coffee pot and flopped over the open sign on the entrance door, before he unlocked it and stepped out into the brisk morning air. The owl-like calls from a pair of mourning doves and the swish of a passing car from the highway filled his ears. He inhaled deeply and savoured the strong smell of the woodland pines.

I love mornings out here, he told himself with a yawn, then loosing himself in the sparkles of frost that rest like diamond blankets, draped over the 10 or so vehicles in the motel’s parking lot. He lit a cigarette and sat down in the wooden deck chair beside the door. Fred felt good; besides being overly tired, he felt content. Ever since Doreen and himself retired things have been nothing but a dream come true.

He finished his cigarette and then went inside and prepared himself a cup of coffee and sat down with his notebook to proofread his previous night’s writing. He had been feverishly working on a novel and with having so much free time in retirement it seemed like a perfect opportunity to become an author. He made a few small edits to his manuscript before the phone rang and he instinctively snatched it up.

“Hello—” a stern, authoritative voice bellowed through the phones receiver. “Is this Fred and Doreen Ferkel’s residence? Is this The Belmont Motel?”

“Yes — yes this is Fred Ferkel, the owner. What can I do ya for ya, fella?” Fred replied, as he nibbled on the tip of his pen.

“It is better I speak with you anyway,” stressed the voice on the other end of the line.

“Mr. Ferkel, I am with a special branch of our Kings Intelligence Agency. My name is Agent Brown, and I am calling under the King’s highest order.”

“Okay, you have my full attention, Agent Brown,” replied Fred.

“First, I am going to tell you some things, but you must promise not to act on them until I personally instruct you to. Are we absolutely clear, Mr. Ferkel?”

“Yes I understand, but you’re beginning to startle me a little here, sir…”

“Good — I would advise you to leave her there to sleep. Now, Mr. Ferkel this is where I need you to focus for me … I need you to tell every guest to leave immediately due to a gas leak.”

“What? Is this a joke, Mister? I think I’d better wake my wife!” Declared Fred.

“NO — Mr. Ferkel, I advise you not to wake your wife. There is something you should know first…” snapped Agent Brown.

“Mr Ferkel, your wife has recently traveled to Amsterclam, is that correct?”

“Yes — with her sister; she did for two weeks last year,” Fred confessed, as he sipped his coffee and cranked an eyebrow towards the ceiling.

“Then you may also remember around that same time the bombing of a massive electrical transformer station that darkened nearly half the continent in its aftermath.”

“Yes — it delayed her flight home for a few days.”

“Mr. Ferkel, as hard as this may be to swallow … The King believes your wife is in fact a highly trained terrorist. He has video proof that she was one of the five suspects lobbing grenades into the electrical station that day … Now, you can neutralize her at this very moment, or you can wait ’til after you have removed all the guests from your motel and before anymore lives are put at risk by this monster you call your wife.”

“My wife’s a terrorist? And you need me to murder her for the King? What if I refuse sir…?” Questioned Fred.

“Is this a threat, Agent Brown?” Fred chirped back into the phone.

“I think you may have forgotten to whom you are speaking with, Fred; you should know I’ll not hesitate to send the order to vaporize your happy little paradise straight off the map. Do I make myself clear Fred? There are stark consequences for a citizen in your position!” Agent Brown blasted through the line.

“Yes sir!” Responded Fred closing his notebook and stuffing it under the front desk.

“Good. Remove all the guests and I will call you back in 30 minutes with further instructions on how to handle your primary target. Oh, and Mr. Ferkel — you’re doing our King a great service here. Godspeed to you and your work.”

Fred hung up the phone and methodically knocked on every room door to inform the guests that the motel was experiencing a gas leak and that immediate evacuation was needed as quickly as possible. After the last guest sped away, Fred Ferkel killed his wife Doreen of 24 years by order of the King, using the glass coffee pot from the lobby’s kitchenette.

Afterward, he sat hunched over the front desk phone, his wife’s blood trickled from his chin and pooled onto the desk. He gazed at the reflection of the coffee pot’s broken, blood-smeared handle in the shallow patch of crimson. He focused his eyes on the chunks of flesh still skewered on its jagged edges. The phone rang and again he snapped it up on its first ring.

“She’s gone!” He immediately barked into the receiver.

“Excellent — you’ve shown some great initiative. I knew you were a patriot, Mr. Ferkel. Thank you for your cooperation, goodbye.”

When officers arrived at The Belmont Motel that morning, Fred was covered in blood and swinging the lobby’s information rack through each of the guest room windows. His speech was unrecognizable, almost animalistic toward the police — “like a rabid beast on cocaine” one shaken officer would later write in his report. Soon, Fred’s movements became violently erratic; he was tasered three times, and, as a result, suffered a massive cardiac arrest and died en route to the hospital.

Sometime into the investigation of The Belmont occurrence, detectives located Fred Ferkel’s notebook behind the lobby’s front desk. It was his 200-page manuscript for his novel, held within the pages was a chilling tale of a deranged motel manager adhering to an authoritative voice projected through the front desk’s telephone and instructing him to savagely kill his wife, or face being blown to smithereens.