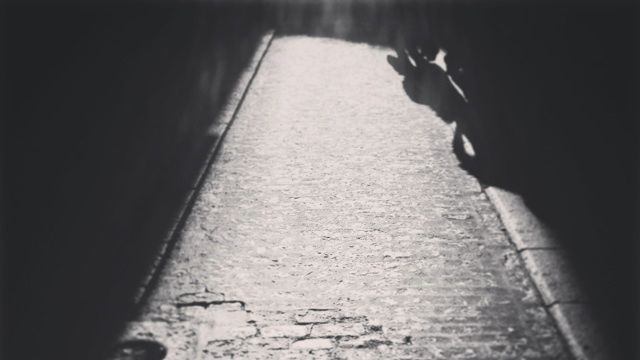 I waited outside the Tablao for her to come out, I lit a cigarette and pulled my collar up against the wind. I smoked the cigarette and when I finished it, I smoked another one and then another one. The wind was blowing and the night was very chilly. I should have brought a warmer coat. It was November 20th and the season was beginning to change. My mother had told me that it was hot in Spain until January, but now I wished that I had brought warmer clothes as it was cold and getting colder, and I was not prepared for it. It was an hour at least, before the flamenco troupe and their entourage finally came outside.

She came out first and saw me and smiled. Then the rest of the troupe spilled out behind her. They were talking loudly and did not notice me. “Do you have another one she asked,” as she approached me.

“I do,” I said and reached into my pocket and pulled out the Marlboros, opened the box and offered it to her. She took a cigarette and put it to her lips. “Tienes fuego?” She asked.

“Sí,” I replied and brought out a lighter and lit her cigarette. She stood there and looked at me.

“What is your name?” She asked.

She burst out laughing. “Ay Joder! Where have you heard that?”

“Here, the bartender, and another man.”

“Es cachondeo, that is a joke.” she said and took a drag from her cigarette and blew smoke out through her nostrils.

“That’s not what you call yourself then?”

“No, solo Anna, I am just Anna. That other name, that is a silly name.”

“Well, you are Americano. You think it is romantic and mysterious.”

“You have me figured out already.“

“Yes, I think I have.” she said and looked at me bluntly.

“You are right, Maybe I do think it‘s mysterious and romantic.”

‘Well then, eres un tio tonto, you are a silly boy.”

“Who’s tonto,” said a young man as he slithered over and draped an arm over Anna’s shoulder. “Quien es tonto, him? Who are you? Eh, el Tonto?”

“I would advise you not to call me that again,” I said. Immediately, I did not like this man.

“Y Porqué no? She called you that. I presumed this was your name.” He was young, near Anna’s age. Thin, but not weak looking. His hair was shiny black with a thick layer of brylcreem.

“She can call me whatever she wants, you cannot.”

“Why not? Somos todos lo mismo, we are all the same.” he said.

“No, we are not all the same. She is she and you are you, and I am telling you not to call me that.”

“Carlos, cállate!” said Anna. “That is enough, he is my friend!”

“Pero Anita, how can he be your friend, when you just met him?”

“Roberto! Roberto!” came a voice from the small crowd that had gathered around us. To my relief, it was Pablo. He came to us and gave me a hug and kissed me on both cheeks in the Spanish style. “So you have met La Mariposa Roja! I told you Inglés, Spanish women are beautiful.”

“Que va, Anita no tengas vergüenza , I am an old man and I can say what I want, especially if it is true. Carlos?” He said narrowing his eyes at the young man. “Que pasa aqui?”

“Good, your are my brother’s son, but sometimes I wonder,” said Pablo. “Is he bothering you inglés?”

“No,” I said, “No me molesta. We were just introducing each other.”

“Good. Carlos, go help Juan with the guitars, I don’t want his hands to get sore from carrying them.”

“Si tio,” said Carlos. He shot me an icy look before leaving.

“Bueno, don’t pay Carlos any mind. He is a dancer and a very good one but he is in love with la Marisposa, isn’t that so bonita?”

Anna looked at me and smiled and shrugged her shoulders. “Vamos a Candela.”

next chapter: The Red Butterfly, Part Six – Love in the Time of War