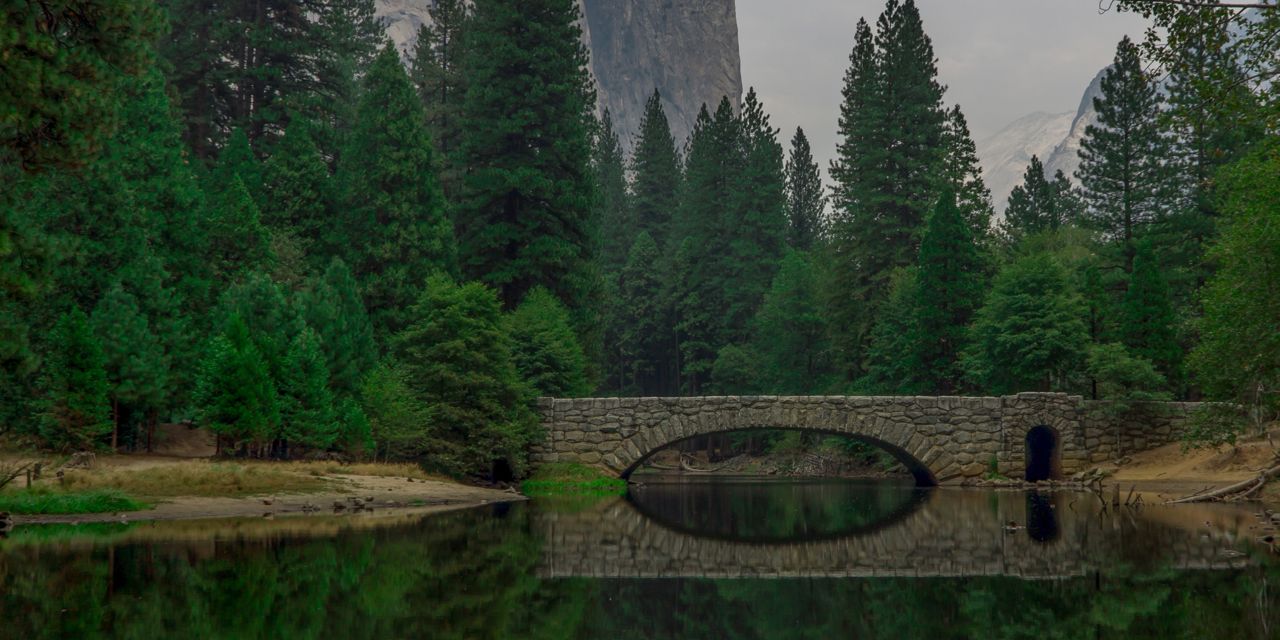 Roger sat on a stone near his bridge looking intently at the lackadaisical water. Inside were some trout, fat ones swimming upstream with modest determination. Roger was large and it took a lot of food to keep his 8-foot-tall body well-nourished. Perhaps a nutrient deficiency growing up caused his pale green skin to have orange splotches and his horns to grow crooked and gnarled. The stained rabbit skin loin cloth was his only form of decency and one of the few possessions he owned.

The booming voice scattered birds and even the fish in the water seemed rattled and scurried off. Tom was even bigger than Roger but his skin was smoother and a dark consistent green. His horns looked like they recently had been worked on and each made one complete loop before spreading out from his head. The big troll lumbered down the slope to the straight wooden bridge.

“Sounds good,” Tom observed the muddy banks of the river surrounded on both sides by forested hills. “I had to take a break from my bridge. I always say after you catch a lot of humans and goats make sure to go easy on them for a bit so they keep coming. You catching a lot here?”

Roger inhaled. What a stupid question to ask, he thought. The mud around him had nothing but a few fish bones and reeds sticking out with an old, moldy femur poking out from near the bridge.

“That’s too bad,” Tom grunted and made long cumbersome strides the rest of the way over to Roger, his feet sunk into the mud with each step. “You know, I think the problem is location. See my bridge is in between some pretty big towns. Plus, it’s the only bridge around so people come over it all the time. It’s great!” Tom seemed to have practiced his speech. “Your bridge, well, it has people on one side of it, but I don’t think there is really anything over there.” Tom waved his hands to the far side of the bank to the old moss covered trees. “Plus there are what? Four other bridges over this creek? Doesn’t the thing dry up in the summer?”

Roger didn’t say anything but nodded his head with feigned enthusiasm for the comparison.

“And do you see that sign up there?” Tom pointed up the near slope along the barely discernible trail.

Roger had seen the sign, but on his side it was blank and he never bothered to read it.

“It says ‘Troll Bridge.’ Maybe that’s why you aren’t doing so well.”

“What a prick! I fucking hate this guy!’ Roger strongly considered saying out loud. He was only saved when a short man in a green cloak appeared over the ridge and immediately saw the two trolls about 100 yards away. The man had a blond goatee and a leather belt with a pouch.

“I’ll gnaw on your bones and salt your fields.” He then picked up a large stone and heaved it with both hands over his head. The boulder made a lofty arc and landed just 60 yards from the frightened man. Tom started waving his arms and jumping up and down before picking up a small log and tossing it towards the man while shouting “Hrreerrr!” The man was clearly shocked by the assault and quickly turned and ran. The two trolls kept shouting for several minutes and Roger picked up a second, slightly smaller, rock and tossed that as well at the now empty slope. “I’ll rip down your doors! And then I’ll rip down your walls!” This shouted even louder than his first attacks.

Exhausted the two trolls began to settle down, Roger sat on a half-sunken log and Tom plopped down into the mud. A smile struggled to creep over Roger’s mouth while his expanded and collapsed. It was matched by Tom’s own.

“Did you see that? We scared the crap out of that guy,” Roger pointed out.

Tom waved his arms, pretending to be the peasant running for dear life.

“Did you see the look on his face?”

The two trolls laughed and mocked the man’s face.

“He was like oooooh nooooo!” Roger contorted his face. “That was great,” Roger admitted, getting his breath under control. “So, how have you been, Troll? Have you caught any damsels lately?”

“Yeah, I got one a few weeks ago; I kept her under my bridge for a while. Then I ate her.”

The next day, Roger woke up from the mud and decided to make something of himself. He followed the thin, rugged trail back the way he saw humans go. He had never ventured far from his bridge before; the first thing he did was grab the sign and yank it out of the mud and toss it far into the woods. He then spat on the hole where the sign once stood before continuing down the trail. It was slow going since he lost the trail a few times in wooded areas. A thought struck him. His whole life he had been a bridge troll; now he started to realize he didn’t know what he was.

I guess I’m a woods troll now, he mused, happy with his new role in life.

After several hours he came across a small town. He could hear and smell the town before he saw it, hundreds of humans bustled about. Horses, hammers and creaking wheels disturbed the quiet Roger was used to. The trail came out to the back of a row of buildings and a narrow alleyway to the main street the town was built around. He had never heard so many humans before and decided not to get involved so he skirted around to the left, staying behind the buildings and in the woods. The town was only a few dozen single story buildings and he soon got beyond it and followed the larger road that lead outside of it back into the woods. The road was wide enough for four trolls to walk abreast; large rocks had been removed and rolled to the side of it so it was fairly smooth with little underbrush. He walked along it for some time until the sounds of the town vanished behind him.

From over the crest of a hill a scream broke the quiet. A man raced over the hill toward Roger, looking behind him. The man was tall with broad shoulders and wore a heavy fur cloak over his green, dyed-wool outfit. A long sword in a scabbard hung from his hip and a large pack was slung on his back. He turned to look forward and spotted Roger.

“Another one!” He cried and froze in an idiotic stupor before pacing backward.

Roger lifted his arms above his head in a menacing fashion and started quickly marching toward the frightened man.

“I’m going to put a curse on you, you will only see toads!”

The man started stumbling backward into the woods away from the path. He almost tripped and turned to run. From over the same hill lumbered another troll near the frightened man. The troll was about a dozen yards from the edge of the trail in the woods in the direction the man was running toward. Roger watched this other troll and lost focus of the man while he admired her. She was nearly the same height as Roger and had creamy green skin with red splotches all over her that reminded Roger of flowers. Two deer skins were crudely draped around her body and tied on her left shoulder, leaving her right breast bare. Small bony outgrowths speckled her well-muscled body and made her look dangerous. Her two horns circled above her head to make her look angelic.

“Come over here so I can beat you to a pulp and rip you to shreds,” she shouted. The man changed directions again and ran back towards the path hoping to escape into the woods on the other side.

His rapid motion shook Roger out of whatever daze he may have been in and he rushed forward, grinding his teeth together to make a horrible noise. The man’s chaotic runs were punctuated with frequent stops and characterized by a stream of tears and snot pouring down his face. As Roger closed the distance the man reached for his sword but didn’t quite manage to draw it before Roger got to him. He swung his arms down from above his head and grabbed the man’s shoulder and side, digging into him with his sharp claws. He easily hoisted him into the air and then smashed him down on the ground face up with a thud. His right arm slowly reached for his sword again but his screams became labored. Roger bent down to grab his neck and raised him back up so they looked at each other face to face. The man tried to yell but only a muted gasp escaped which was responded too with an ear shattering shriek from Roger directly at the man’s face.

“I’ll turn your into a soup and make your skull my hat!”

Roger’s left claw came down across the man’s chest. It sliced through his clothes and straps to create a splash of blood and a chasm through his bones and sending him crashing to the ground again. Blood gurgled up the man’s mouth.

The other troll shoved Roger.

“Well I caught him, and I don’t see your name on him,” Roger glared at the troll and stomped his feet onto the ground. He moved his head forward and back indicating he was ready to head butt however he didn’t attack. “What if we split him?”

She reached down and grabbed his legs while Roger grabbed his chest and the two pulled. Both had to lean backward and strain but soon his entire body began grew stretched. Popping noises were heard and then all at once rips appeared in his skin. In seconds his whole body split in two near his navel. His raspy grunts ended and the ground beneath him became drenched in blood and organs. Roger began chewing on the man’s arms while the other troll first sliced off his clothes with her claw and then started eating him from the inside of his torso. Roger’s powerful teeth crunched through bone with no effort. He slurped up the whole arm like spaghetti. Neither were efficient with their gruesome meal and by the time they finished scraps of meat and bone covered the pine cones and dirt, shredded clothes blew in the wind. Roger picked up the sword with his toes and cast it deep into the woods off the road. He looked down the road; chances are if he kept walking he would find a nice empty bridge.