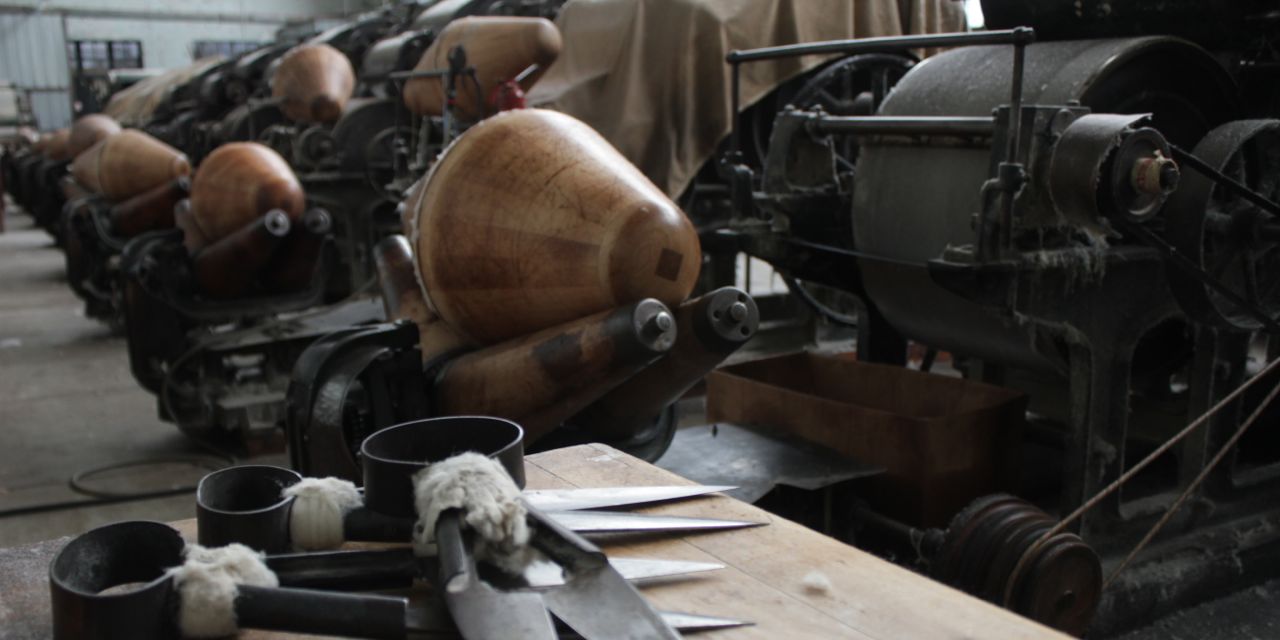 Rachel looked at her class calendar in disgust. She thought for sure it was next week; now she has to cancel her burrito plans just to visit a mill in order to write her term paper, even though she considered faking the whole thing. Grudgingly, she went down to Cartwright Street where she found the fading red brick façade of the Cabot Lowell Mill. Inside she met with operations manager Paul Moody who would give her a tour and explain the history of the mill.

The front-end of the mill seemed dull: a small office, a break room, a locker room. As she went deeper, she felt an overwhelming power looming about the place, something ethereal but immense. Turning the corner she saw what was behind it—a massive power loom! It sparkled with precision movements; its shuttle screamed back and forth as the loom Shed, Picked, and Battened hundreds of times a minute. Rachel was flooded with a cyclone of thoughts and emotions. The raw intensity, the pure power, the uncontaminated rhythm were more than she could bear. “And this particular loom was purchased in 1979, and as you can see it is still running. It can be used to create 50 different stitch patterns.” Paul kept talking but Rachel could only pay attention to the masterful workings of the loom and the growing pile of cloth neatly folded in its wake. “Oh how lucky that cloth is,” thought Rachel.

Weeks passed and the semester ended. Rachel now looked forward to graduating with a 3.9 GPA, buoyed up by her passionate term paper. As her friends talked about internships and summers abroad and all the other adventures they excitedly planned for, Rachel was happy for them but she couldn’t commit to anything, turning down invites for week long beach vacations and a parent’s friend’s house in Brussels. Days passed in a fog; indecision and apathy enveloped her. Of the several plans she made, none seemed to generate any enthusiasm. “Yeah, so starting in July I’ll be interning at the Cummins plant in Columbus. I just like working with the diesel engines; they are so massive and really useful,” her friend prattled on at a party, ignorantly glorifying his future. He was unaware of how much more profound the workings of a power loom are, and how much people have benefited from the billions of square feet of fabric that have been almost effortlessly created. It was then that Rachel realized she could never be happy unless she was weaving.

Two weeks later, at her interview, Rachel’s heart pounded. She was so close to entering a world that she had just recently discovered. She always knew that industrialized cloth manufacturing took place, but it was just an exotic thing that people talked and giggled about, maybe weaving a little for fun. Now she was on the edge of this world where hundreds of people spent hours, their whole lives dedicated to weaving, to working in perfect harmony with a power loom. The edge of the cliff was falling away and approaching her at an alarming rate. “Please take a look at this labor contract, sorry it’s kind of long,” Paul gurgled as he pushed a thick stack of paper towards her.

The contract was incredibly strict, and outlined explicitly her rules for employment: breaks were 30 minutes, can’t call in sick more than 6 times per year, progressive discipline, non-disclosure agreements, non-compete articles. It was almost too much to bear. Rachel had never seen a contract like this before. She felt overwhelmed by the reality of the contract—her head fluttered like a typhoon. If she agreed, she would be spending 40 hours a week doing nothing but weaving, and there was even a possibility of mandatory overtime. If she refused, she would never get to work on the power loom. While Paul continued talking about training programs, uniforms, and Christmas parties, Rachel grabbed the pen from his hand and started signing page after page of the contract, initialing some lines. With every signature, she felt lighter and by the end she soared with excitement. “So when can I start?” she asked excitedly.

She arrived early her first day. She put on her denim apron and tied her hair into a tight bun. Her training began. She eagerly jotted down notes on safety and power loom operations, paying particular attention to loading and detecting broken picks — learning everything the loom tells had to say. Next she practiced repairing broken picks, a challenging and strenuous task that required all her concentration. It left her exhausted after several practice knots, but she had no time to rest before practicing again and again for hours until she had it perfect. She never imagined the training would be so grueling and intense. She even thought of quitting but understood this was the price to pay to make the broadcloth that an entire civilization would benefit from, clothes and blankets and a million other things. The historical significance was not lost on her either. For hundreds of years power loom mills had been the driving force of the economy of England and New England, and they had far-reaching effects, wars happened over cotton and cloth tariffs and trade. Slavery dominated much of America to feed cotton into the loom; unions and massive protests erupted over children working power looms; 146 garment workers would die in the triangle shirt waist factory because of the cheap cloth that came out of power looms, very much like the ones humming so nearby. For Rachel the call of the loom was too much for her and she would follow in the footsteps of so many others and ecstatically work the loom.

Soon, she was working her own loom hour after amazing hour. Electricity thundered through her like a herd of buffalo each time she completed a bolt of cloth with the loom. The creamy white band pushed out and neatly wrapped around a wooden pin for her to nip and loop the other end around a new pin. The sensations she experienced from combining 50 strands of thread into a continuous sheet of cloth was so satisfying and so new. She felt dirty, the power looms constant shaking and clattering having stirred up a great deal of dust which clouded the room no matter how often she cleaned it.

After several months, she learned how fickle and high-stakes her new world could be. After several hours of overtime, she was admiring the quick, rigid movements of the cloth advancing while checking the tells, when suddenly her hand was pinched with tremendous force by the swift shuttle. She screamed out in pain and her world blurred. She remembered seeing blood ruin the beautiful cloth and workers rushing to bring her to the hospital.

The physical injury ended up not being severe. No broken bones, just some deep lacerations. But she didn’t know if she could ever work a power loom again. She had become complacent and hadn’t kept up with the tremendous speed and ferocity of the loom. As a result she now lay in bed a broken woman. She would need to look for some lesser line of work. It would never fulfill her the same way, but at least it would be safe. Even while looking for jobs, her thoughts lingered on how she had flown so high, and experienced things few others would ever understand. She had flown too close to the sun, and put her hands too close to the shuttlecock, but maybe it was all worth it.

“Listen Rachel, I hope you’re doing better. All the guys at the mill all wish you the best, and you should be getting a gift basket soon. It’s got some soaps and stuff and this cool thermos thing.” Paul went on and on about trivialities but just hearing a voice from that other world had a profound impact on Rachel; her heart started racing. “And finally I was speaking with HR and we were hoping to hear back from you with a date you could start again. Do you have a doctor’s note or anything?” Thoughts and emotions ricocheted inside of her like a geometric screen saver. This was her chance to leave this weaving world forever, or she could go back and redouble her efforts, triumphant in her devotion to cloth productions. “I’ll do it Paul!! I’ll be back in tomorrow.” “Well we don’t mean right away, you would need a doctor’s note and to clear it through HR first.” Paul kept blabbing about irrelevances, but it didn’t matter. Rachel made up her mind. She would go back, maybe even that very day and start making spool after spool of cloth, maybe until she was 65. And even after, maybe she would work part time or something.