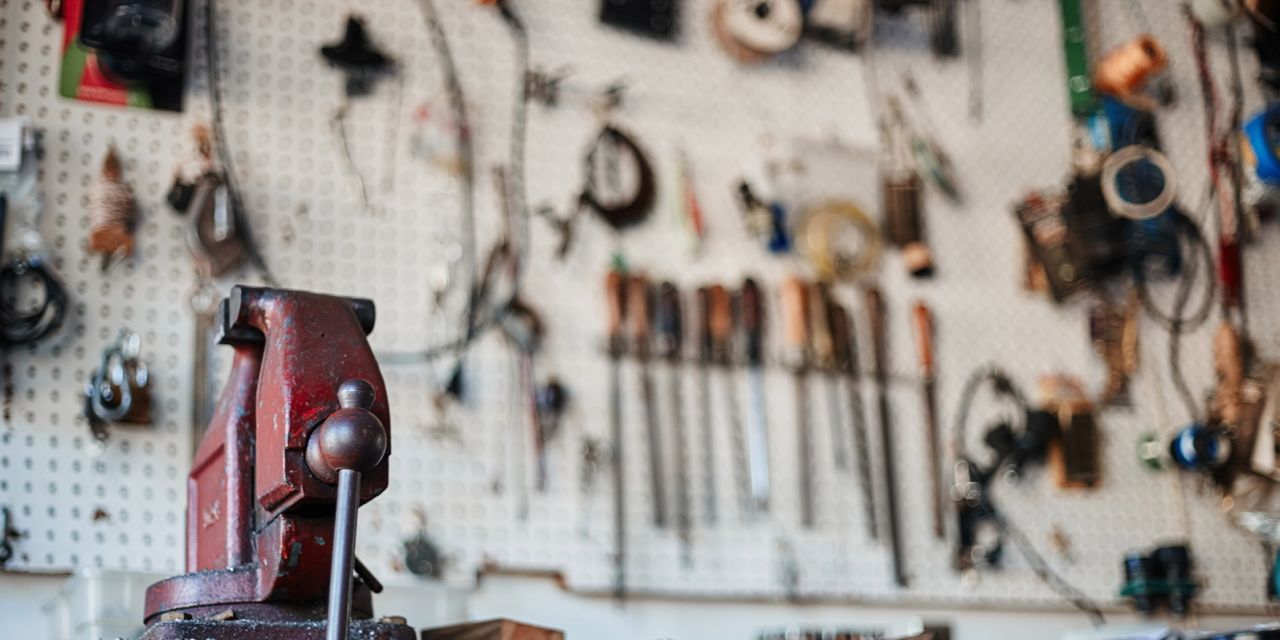 I’ve always felt like I could have had a very successful and happy life had I learned a trade. In the wake of the industrial revolution, families were no longer obliged to cultivate there own sustenance. Perusing the supermarket for quick and cheap calories gave way to opportunity for further development as a society. More art, more music, more automobiles and more business. If you told someone a few hundred years ago that millions of people could earn their keep sitting at a desk plugging numbers and ideas, they’d bock at such fantasy. A keystroke would lead to a flick of a switch, which would lead to an order, which would eventually translate into a highly automated process overseen by a few unskilled labourers.

‘Where was the substance?’ some might ask. Or maybe such progress was inevitable. Beyond food and shelter everything else is surplus. But not every job in the modern era can be automated. Sure a machine can process many components, but a skilled hand and a little elbow grease turns rivets into space shuttles.

I’m from a city where I’m certain nearly every citizen must ask themselves dozens of times each winter “why the hell would people ever have settled here?”… Moreover “why have I stayed this long?”. The winters are miserable. High winds and sub-­arctic temperatures would drive any tourists into hibernation, but the locals forge on.

The hospital parking garage lay across the street. Two towering snow banks, 4 lanes of traffic, an ambulance bay and a large courtyard could be avoided with an underground tunnel which connected into a stairwell leading to the glass atrium at the front of the hospital. The tunnel was heated and dry but far from luxurious. Cast concrete walls painted in a drab jaundiced yellow were pocked by occasional vandalized bubble letters along the 300 foot tunnel. Plumbing pipes, electrical wiring and heating ducts hung from the roof, encased in a thick layer of dust; accumulated over the years.

The seasonal deep­freeze interrupted by warm summers wreaked havoc on these utilities as the earth encompassing the tunnel slowly churned and settled, year by year. It seemed every second day a maintenance personnel was tinkering with these pipes and wires, precariously perched on the second highest rung of a six foot step ladder. With their head held between the ductwork attempting to fasten or loosen some clip or bolt, their hands and forearms agitated the dust which fell around them in a small cloud.

Briefcase and coffee in hand I was rolling my shoulders as I walked through tunnel, attempting to entice circulation back to my extremities after exiting from the paralyzing cold. I could only see brown­mustard coloured overalls and paint speckled steel toed boots below the duct work. As I approached I heard a few small clicks followed by a dull thud reverberating down the aluminum heating duct above me. Another thud and muffled curse as I drew closer and a small screw and large blue screwdriver fell to the floor; clicking and jumping a few times before settling amongst the dust and fluff balls accumulated on the floor.

“Let me grab that for ya” I said as he placed his foot on the next rung down the ladder about to descend. I leant my briefcase against the wall and placed my coffee next to it before I collected the tool and hardware. Placing a hand on the ladder I peered up between the ductwork. Looking back at me a set of kind and appreciative eyes behind scratched and dusty glasses.

“Thank you, doctor” the man said in a soft but weathered voice. I couldn’t quite place the accent. It was only a subtle inflection, as if he’d added another ‘o’ in doctor; ‘Doctoor’.

“You’re welcome” I smiled extending an arm upwards with the implements. “What are you repairing” I inquired looking over his handywork.

“Not repairing” he stopped, “Putting in new brackets to run video cable from the security office in the hospital to the new automatic gates at the front of the garage”.

I looked back down the tunnel at the progress he’d made.

“Only about a quarter done so far” he said bringing his head below the ducts looking down the tunnel at the gauntlet of wires and pipes he was yet to navigate.

“What a tangle” I acknowledged. “Polish?” I pried as he turned back to me.

“Your English is perfect so I’m guessing you’ve been here quite a while?”

He chuckled again slowly exhaling. “Probably since before you were born son, 1955 with my mother when I was a teenager”

“Four kids and almost 40 years goes pretty quick” he smiled, moving the screwdriver to his other hand.

“Tell me about it, I felt like I was in diapers last week”.

He cracked a smile. Half a dozen metallic fillings lined his lower molars.

“Let me ask you” I inquired looking down at his toolbox. “Wouldn’t a drill make this go faster?”

“Well if there weren’t so many obstacles to bump into I’m sure it would. But getting between these pipes with a drill in one hand and a screw in the other would just be a pain. You can’t really feel whether the screw is biting in with a big clunky drill. With the screwdriver you know what’s happening just by feel.”

“Hmmm” I nodded in agreement. “My father in law has a basement full of tools but I think he gave up on me when he found out I didn’t know a phillips from a robertson”.

He smiled endearingly with a soft laugh as if to imply ‘kids these days’.

“I know the difference now” I assured him. “That’s a Phillips in your hand right? The star one?”

“You’re right” he replied. “The electrician’s weapon of choice”

Footsteps down the hallway prompted us both to turn an look; another heavily bundled employee finally free from the cold outside.

“Frank” he responded, again switching the screwdriver to his opposite hand to extend his right.

“Andrew” I said reaching up to shake his coarse callused hand.

“Nice to meet you, Doctor Andrew.”

I turned to pick up my briefcase and coffee as Frank stepped back to the upper rung of the ladder, head vanishing between the utilities.

“Stage 4 lung cancer”. I wish I had better news for you.

Had Frank and I known each other better I wouldn’t have taken him as a patient. I would have referred him to a colleague. Since the first time we met 3 years before we had probably talked a dozen times in the hallway for a couple minutes. He told me how his two daughters were both pregnant at the same time, how his one son had capitalized on the booming oil industry out west and how his other son had made partner at a law firm in Toronto. He always remembered my wife’s name and was sure to ask a question or two to keep me fresh with my tool names. I had once ran into him and his wife at the movie store as we both perused the new release VHS section on a Saturday night in December. We both rented “Schindler’s list”.

‘Thank you?’ I thought. I’d just given him a death sentence. What thanks was there to give?

He had coughed up some blood after a feeling under the weather for longer than the seasonal flu should have lasted. At the emergency department they had likely assumed bronchitis or a mild pneumonia. A chest xray suggested otherwise. 6 days later here we sat.

“I’m sorry, Frank.” I leaned forward and rested my elbows on my desk. It was just the two of us.

“How long do you think this has been in me?” he asked.

“Most of the data we have is based on following tumour growth after it is large enough to find on an xray. It is hard to say. If I had to caution a guess it would be just a guess. It could have been ten years, it could have been one. It is less about the length of time it has been in you and more the areas it has moved to.”

“How long do you think I have?”

“Just tell me” He interrupted, the same pleasant and appreciative eyes behind the same glasses as three years earlier in the tunnel. Only a layer of anxiety had been added to this encounter.

“Frank… based on what I see in your case compared to previous patients I have had with a similar growth… four to six months is a generous prediction.”

His eyes sunk towards the ground. “I’m 56. I thought people lived till they were 90 these days.”

It wasn’t a question he wanted me to answer. Any attempt to rationalize the hand he had been dealt would have fallen short of what a just world would have provided.

It was a warm day, at least compared to the weeks leading up to it. It was the first day in months I hadn’t used the tunnel.

In August later that year I was sitting in my office. It was a Friday. My wife and kids had been at our summer home for a couple weeks and I was excited to join them for the upcoming week. Clinic had ended at 3 and I was finishing some paperwork when I heard a voice.

I looked up from my desk to small woman, hand on the doorframe of my open office, bag strap over her shoulder. It was warm outside but she wore a silk floral shawl.

“Come in” I said. Pushing back my chair, I stood up. I recognized the woman from the video store a few years prior and from the cancer center.

“How are you, m’am” I extended a hand and she slowly approached my desk raising her arm.

Rheumatoid knuckles shook with delicate tremor as I gripped her palm. She raised her other hand to cover the back of mine. A gold band with a tasteful single diamond dawned her ring finger.

“I am well, Doctor” she replied with similar inflection to that I had known in her husband’s voice.

“He told me about the first time he met you you know? How you had handed him back the tool he had dropped in the tunnel. He said you asked good questions. He said he was surprised you knew about tools. At dinner sometimes he would say ‘I bumped into the doctor from the video store again. He ask how you were.’ When our son was in town last winter they built a pair of small matching birdhouses for our grandchildren and he told our son about how you would talk to him about machines you used at work. He said you seemed fascinated by their mechanisms. When he told me about the cancer last year he said he was happy that the news had come from you. He said you would not lie to him. And you didn’t. His toolbox has been at the bottom of our basement stairs for almost 6 months. I still do laundry and use the basement freezer so I pass it almost every day. But I hadn’t opened it, until today. It’s the blue one right?”

She loosened her grip on my hand and reached to the bag which hung under her arm. Fumbling momentarily, she pulled open the zipper and slipped her hand inside producing a large blue screwdriver.

“It was the blue one right?” she repeated looking up at me kindly as she gently placed it in my hand.

“The blue one” I responded.

“Frank would want you to have it.”