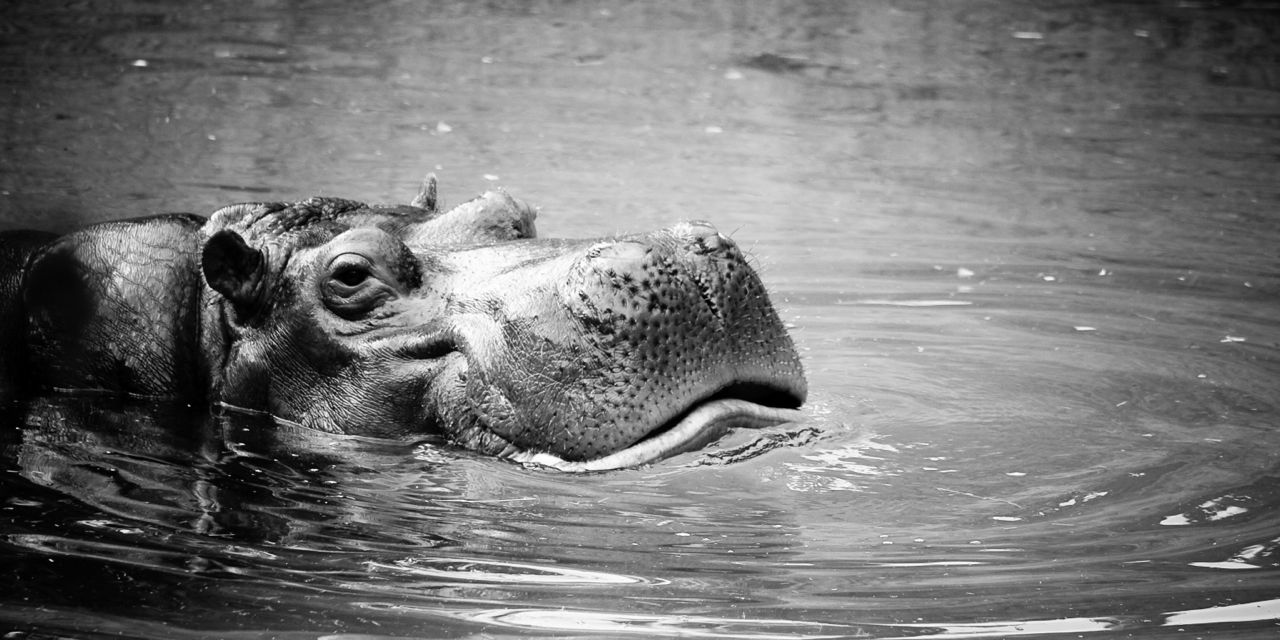 The flock of elephants, led by the giant male, kept along the greenest patches of vegetation they could find. But it was harder to find moist leafs. It hadn’t rained in weeks which was not typical for this time of year. The Elephant was worried because every adult in its flock needed three hundred pounds of greens a day. Consuming dry straw only irritated their stomachs and made them hungrier.

The baby elephant was not as chubby as its parents wanted it to be, which brought danger as predator attacked it often. The small one-ton baby was protected by the flock and was unhurt, but the concern was high.

The Elephant decided to visit a neighbor, as old and wise as itself, to discuss a solution. That neighbor was a lazy Hippopotamus. The Hippo was laying in a shrinking pond of dirty water under the scorching sun with only its nose above the surface. A small bird was poking at the pores of its skin searching for bugs. A few smaller hippos were waiting impatiently under a tree for their turn.

‘Fit all of you used to, two weeks ago this a pond,’ said the Elephant.

‘Take turns we are now.’

‘Young we were, when traveled north, the last big draught, in.’

‘Lazy is the new cool,’ the Hippo blew some water through its nose.

‘More one week, more no water,’ said the Elephant.

‘We in the forest hide, rainy until.’

‘Hide! Nobody to hide likes.’

‘Travel north is one week.’

‘Yes forgot, forgot how to walk you. Only remember to sit in mud how.’

‘Soon come rain, smell can I.’

‘Neither me. Lazy I am. Lazy for adventure.’

‘Your family take and go me with.’

The bird hunting bugs in the cracks of its skin found one hibernated beetle, pulled it out and crunched it with its beak. The Hippo’s eyes rolled up to observe this happening. The Elephant didn’t notice.

The most inviting path north was the dried up bed of the seasonal river. The Elephant and the Hippo made steady progress up and as they neared the wet forests the river was still dry but the ponds and puddles of water grew slightly bigger and the soil slightly moister.

That was enough to encourage the two families.

The river bed was closely watched by all sorts of animals, all hoping for rain. The surviving ponds were usually crowded and often staked out by predators. More than a few shiny white skeletons littered the dry dirt.

After a few days of walking and very little rest, a small brook, still mostly mud, streamed in the center of the river bed. The traveling party was able to lick the moisture from the soil to stay hydrated. The brook widened as they traveled along and more grass and trees with green leafs appeared on the banks.

‘Further more much how,’ asked the Hippo.

‘Almost there we are.’

But after traveling three more days the brook dried up and all signs of moisture disappeared. The Hippo family stopped and refused to go any further.

‘Dry is the north,’ the Hippo said.

‘Reach will we the forest in two days and in shade hide.’

‘I could hide in shade home back.’

‘Never have I this far north been. Home I want.’

A bird flew over, landed on the Hippo and started poking at the giant cracks in its skin. The Hippo shook his entire body and bird flew off.

The two animal families kept at the dry river bed for two more days until it was riverbed no more. The seasonal brook split up into tiny channels that in their turn divided into tinier cracks in the dry soil leading up into the thick forest.

The forest was so thick that the Elephants and Hippos could not find a clearing wide enough to enter. They started at the edge of the forest chewing green leaves as they went. The leaves were fresh and moist and provided comfort.

At last they came to a clearing that lead into the forest. At the opening on a tree stump stood a monkey playing with a metal water flask dangling from its neck on a rubber string.

‘Water is there in the forest,’ asked the Hippo.

‘Yes, water, much water. But many Lions and wild cats wait by the pond.’

‘Lions are not dangerous.’

‘In the dry season many animals come to search for water. They go inside forest drink water and return never.’

‘Any elephants or hippos in go?’

The monkey took a swig on the flask.