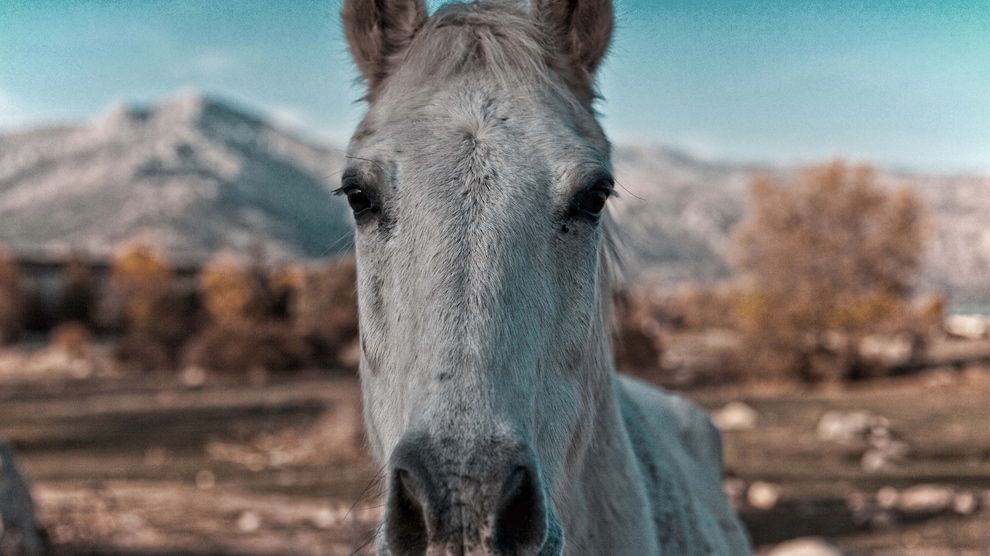 The Parrot watched the seagull for a while, ate a little more of the sticky green grass and started moving along the roof peaking down from the sides. It was searching for something. It was quite clumsy like a penguin with uncertain steps. It finally found what it was looking for. Its master’s horse.

The Parrot leaped from the roof, spread its wings and glided to the back of the horse. However it overshot its target and landed on the ground beyond the four-legged animal. The Horse slightly turned its big head chewing on grass as always. The Parrot smiled to the best of its ability and leaped up and up to the back of the Horse.

The animal followed the bird’s efforts and stopped eating. It lifted its head from the grass and looked back over its shoulder no longer amused. The Parrot was barely keeping its balance with its nails buried in the Horse’s back.

The Horse gave what it thought was its best smile which only bewildered further the hazy eyed Parrot. The Horse turned forward and started moving slowly. Now the Parrot smiled and gripped firmer the Horse’s back in order to stay on it. The cool breeze accelerated in its face and Parrot felt enlightened as if the universe was speaking to it.

In fact that is exactly what the Parrot thought so it listened intently. The Horse sled up and the voice of the universe grew loader. The Parrot bounced up and down barely holding on but its mind flying. The horse went as fast as it could and leaped up over up-side-down boat as it entered the sandy shore line.

The voice of the universe abruptly ceased as the Parrot was forced to let go and make a triple back flip. Everything happened so fast the the Parrot couldn’t open its wings and instead in order to stay afloat bit the horse’s tail with its giant multicolored beak.

By the time the pain had traveled through the Horse’s nervous system and reached its brain the Horse had reached the edge of the ocean and halted with a devilish hustle and bustle. The Parrot was one again forced to let go this time of the tail and make several front flips until in landed in the shallow waters in front of the Horse.

After pulling its beak from the sand and shake off the excess fluid from its feathers the Parrot looked up ready to preach. ‘Ko-ko-ko-ro-ko-ka-ka-du!’ It started, then proceeded to explain to the Horse the facts of life. How colorful was the world and how all animals can be happy only if they listened to the words of the universe that the Parrot had translated for them.

The Horse didn’t speak any of the bird languages and to it the Parrot sounded like a crazy bird. The Horse was generally sad. It spend most of its time alone eating the same old grass. The rest of the time his giant master rode it to town and loaded it back with cases of whiskey and other provisions. The worse was when they went to sea to far lands. The Horse hated the sea.

And lately it had seen many omens that a voyage to sea was eminent. Because a lot of giants had come and done from the House and its master had drunk more than usual. So the Horse saw its life as dull and grey. The jumping colorful Parrot in front of it was not something it could relate to.

The Horse slowly turned back and walked to the House where it could chew on dry hey hope for the best.

The Parrot realized that the Horse was born into the captivity of the the giant. That was why it couldn’t dream of emancipation. It had never known freedom the way wild horses and birds did. The Parrot resolved to fix that.