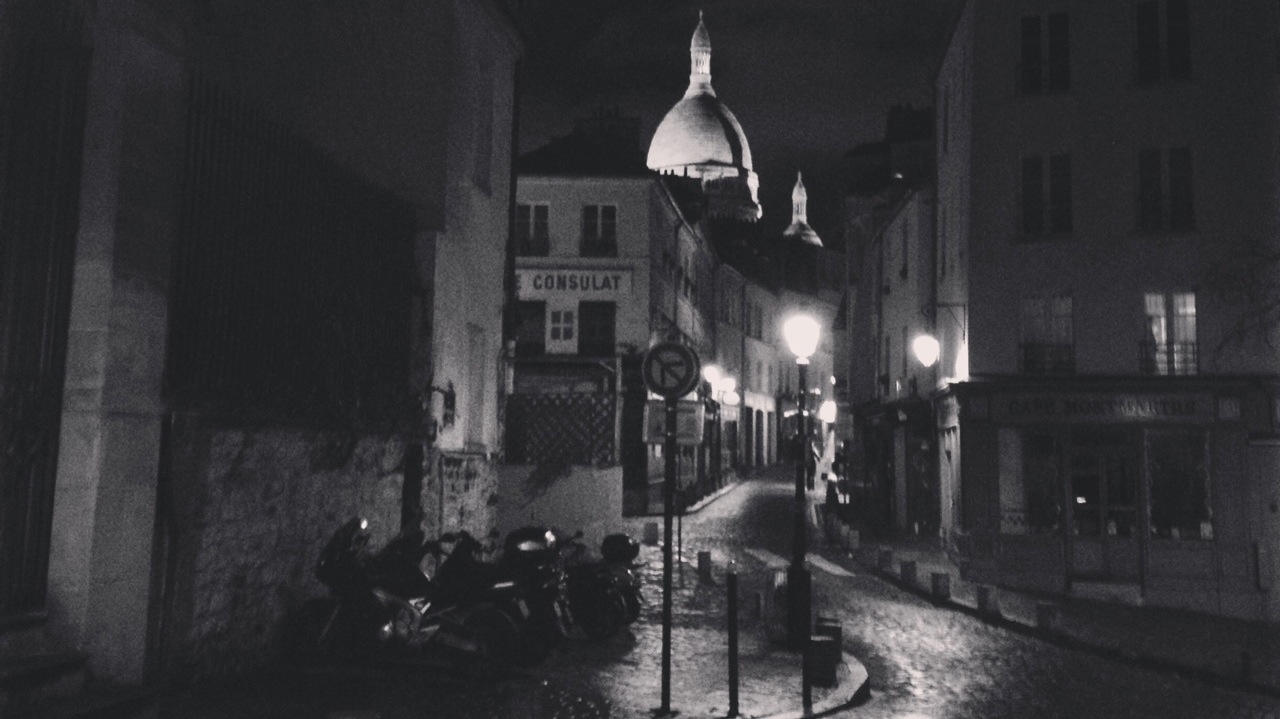 We spent a month at a bookstore in the old Latin Quarter of Paris. The old shop had a long history of allowing aspiring writers to bunk there as long as they worked a couple of shifts every week and were ostensibly writing. Joanna was a literature major and had considered applying for an MFA in creative writing and I was a musician who couldn’t imagine anything worse that sitting in front of a word processor punching away at the keys, one finger at a time. Neither of us were really writing at all. Mostly, we went to the Le Deux Magots and drank chocolat chaud. We pretended to be Jean Paul Sartre and Simone De Beauvoir. We imagined that the seats that we were occupying were the same ones that they had sat on and that the plaza in front of the restaurant was exactly the same now as it was then when they stared at it many years ago. In the rain perhaps. We played little games sometimes. ‘Is that Picasso, sitting over there with Amedeo?’ ‘Why yes, I believe that is, but that man he’s with is not Amedeo, sweetheart, it’s Amedeo’s friend Soutine.’ ‘I though they couldn’t afford to eat here.’ ‘Maybe not Soutine, but Pablo definitely.’ ‘Let’s go say hello.’ ‘No, their conversation looks serious, better leave them alone.’

Sometimes, the manager at the bookshop let me set up outside the shop with my guitar to play some music, usually solo, usually jazz standards. Sometimes Joanna joined me on trombone, which she had played as a kid, or sometimes she sang.

At the bookstore, we also met a Norwegian guy named Marius who showed us how to get free meals, important since eating in Paris is extremely expensive. We couldn’t subsist on hot chocolate alone. It turned out that the American University in Paris offered free meals to its students.

‘It’s easy; all you have to do is walk like you belong. Don’t say a word to the guard, just walk right through, talk loud, because that’s what the American kids do, and he’ll expect it, and whatever you do, don’t look at him.’

Technically, Marius should not have been eating at the American Academy lunchroom since he wasn’t American, but he spoke absolutely perfect English and so no one questioned it.

The American University of Paris was near the Rue Saint-Dominique, a pretty stretch of cobblestone streets surrounded by 17th century buildings on either side that stretched virtually unimpeded all the way to the Eiffel Tower. At the entrance of the cafeteria sat a just past middle-aged African man with skin so dark it was aubergine and shocking bloodshot eyes. We entered through the front doors talking a little too loudly about nothing at all in, English. The man stared at us hard, but Marius simply ignored him. But then, Joanna lost her nerve and said hello to him. He narrowed his eyes but didn’t say anything; he hesitated and we were past him.

‘Why did you talk to him?’ I hissed at Joanna.

‘He made me nervous, Jesus, those eyes!’

‘They all look like that,’ said Marius, ‘they come from the Ivory Coast and get jobs through the state. And since they work whatever hours are available. They get the guard jobs. But they don’t really want the hassle of dealing with the students, especially Americans. They think Americans are more trouble than they are worth. Just so long as you don’t look too out of place, they leave you alone.’

The cafeteria was a gift from god! The restaurants and cafes were great, but we couldn’t continue to eat in them if we wanted to make what little money we had last. The university cafeteria served free food and best of all, it was open twenty-four hours a day.

Marius had been in Paris for five years, and the whole time he was in there, he lived in the Bookstore, in a nook above a shelf on the second floor. On his thirtieth birthday, a bunch of us from the store went out to a burlesque club in Pigalle. A friend of a friend of a friend knew someone who knew someone and we got in for free. Which is something, because those places are pretty expensive. It was a huge place, an old theater, with blue neon trim on the stages and walls and black leather couches and black lights. The dancers were pure naked, no pasties, but they looked tired and baggy. It was a Tuesday so this might have been the slow night shift. We got drunk and snorted coke. A dwarf in a harlequin suite poured a couple of droplets of neon green liquid into my cocktail and said ‘Monsieur, this is the real faery vert.’

‘Yes, mercy, you will cry for mercy soon boy.’

‘Whatever,’ I said as I gulped the drink down in one swallow.

Afterwards, it was swirls and stars and a giant red moon reflected on the seine. A girl gave Marius and lap dance. Marius dancing, giving the girl a lap dance, Joanna getting a lap dance, two old and immensely fat twin sisters in tattered and stained pink cotton dresses offering me ‘focky focky,’ Joanna French kissing the dwarf who dropped the green neon stuff into my drink and who was now completely naked, exposing his tiny bowed legs. Joanna French kissing one of the old sisters. I see the Persian boy who we beat up in Clichy-sous-Bois. He is holding a small wooden box
He sees me and he sees that I am staring at the box.

‘Come with me,’ He says and takes me to a room with mirrors and a black leather couch, an ottoman and a dancing pole. He sets the box down on the ottoman and opens it. Inside, I see lighters, a spoon, a bunch of needles and syringes, and small packets of a brown-black rock like substance. He offers some to me.

‘You have this here.’

‘We have everything here.’ he says, in a high, beautiful sing-songy voice, ‘do you want to some?’

He gives me the gear and I prepare everything. I burn the spoon over a lighter, draw up the syringes, tie off my arm and shoot up. As the hot liquid burns into my vein, I notice for the first time that the left side of the Persian boy’s face is still bruised and looks slightly dented. I reach for him and touch him there.

“Does it hurt?” I hear myself ask. But he doesn’t answer, just looks at me with those big eyes and I begin to sink. I think of the fruit bursting on the pavement, and oozing. I sink deep into a blue cloud. I stare at the pale vinyl ceiling above me. The thump of French house music beats through the floor and through my chest and into my head. An enormous cockroach crawls on the ceiling and loses its hold and falls with a heavy, fluttery thud.

NEXT CHAPTER: River of Rats, Part Three – The Bridge