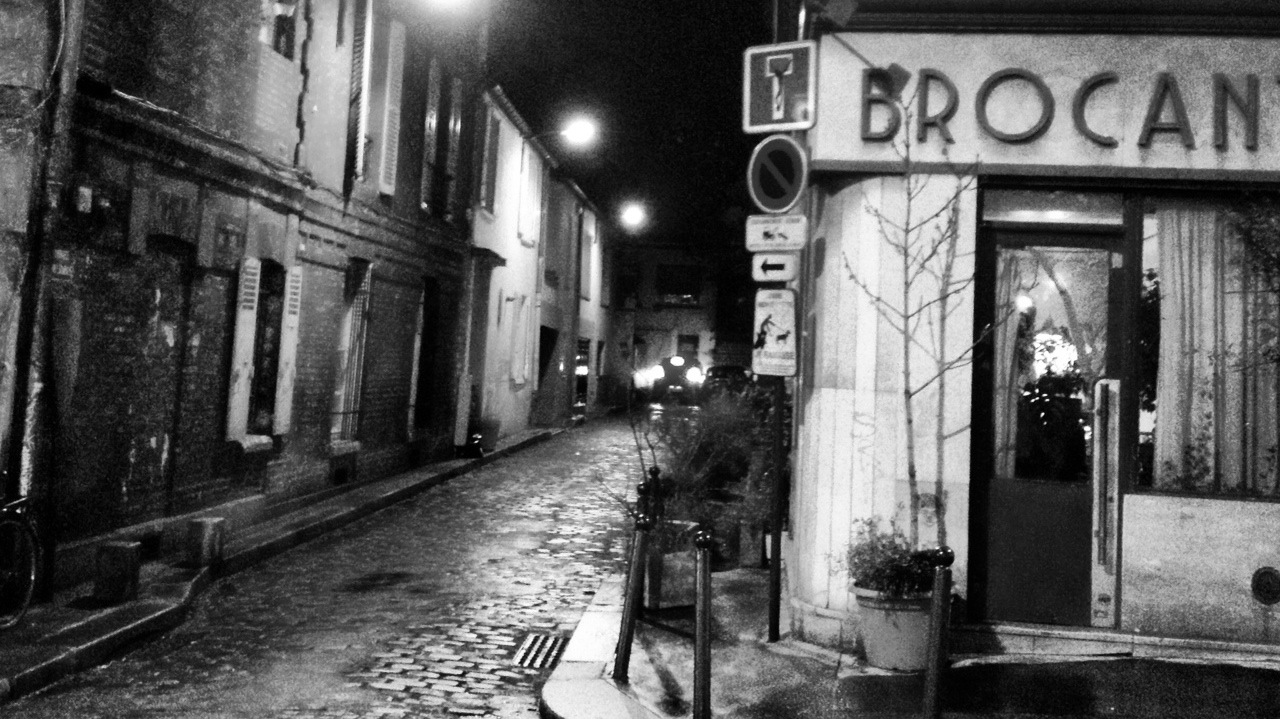 The summer came and went in a heavy gossamer haze. We spent days walking up and down the Seine and around the city and we often sat on the tip of the Île de la Citè, under the drooping willows, facing downstream towards the Ferris wheel and the Eiffel Tower. We continued to go to the university until turnstiles suddenly appeared at the entrance of the cafe. We watched as students slid heavy plastic cards over a small black square and slipped through carelessly. The guard looked at us with those big sleepy, blood-shot eyes and smiled at us and nodded. Try to go through now.

With fall came the rains and the cold. So much rain! I don’t remember it raining as much the previous fall but then again, we were living in the flat in Montmartre. I though of the small flat then, longingly and not with a small touch of nostalgia – thinking it quaint – even though the walls were always damp and sweating.

I busked with my guitar on the streets. Bob Dylan and Neil Young songs seemed to be everyone’s favorites. One day a young French man asked me to sing some Serge Gainsbourg songs but I didn’t know how to play any and instead sang La Vie en Rose, badly, in broken and heavily accented French while the young man looked on disgust. Worse, he didn’t leave a tip.

We did much better when Joanna joined me. I was getting pretty ragged and hadn’t shaved in almost a year and my splotchy red beard was harboring fleas. I had taken to washing my clothes in the river and they acquired a brownish tint from the brackish waters. Joanna, although by late fall had lost a significant amount of weight, magically still kept herself together fairly well. She sang with me and had a sweet smooth voice and knew many of the old standards, which she had learned growing up in New Orleans. Her favorite song to sing was “Dream a Little Dream of Me.”

When she sang, we made just enough money to buy bread and butter and a cheap bottle of wine at the grocery store. On those days we would feast by the river in the shadow of the bridge. We certainly did much better than when I sang Townes Van Zandt’s “Waitin’Around to Die.”

Joanna was getting impossibly skinny. And I saw a reflection of myself one day on a shop window; staring back at me was a stranger, much older than myself and with eyes set deep in the skull, a broken up rug of a beard, eating up my face.

I thought about the time that I stole a fish at one of the covered markets. There was a crowd at the fishmonger’s stall, and I slipped in behind an older lady and her daughter, slipped my hand literally between them and blindly grabbed whatever I could get my hand on. I felt something scaly, cold, and slick, grasped it and ran. I tucked the wet fish under my shirt while people stared. The voice of the fishmonger chased after me, “Voleur, voleur!” It rang in my ears. Despite my diminished state, I got away and back under the bridge. We used my old camping stove and a burner and cooked the fish, eating it plain and straight, chewing the meat right off the bones.