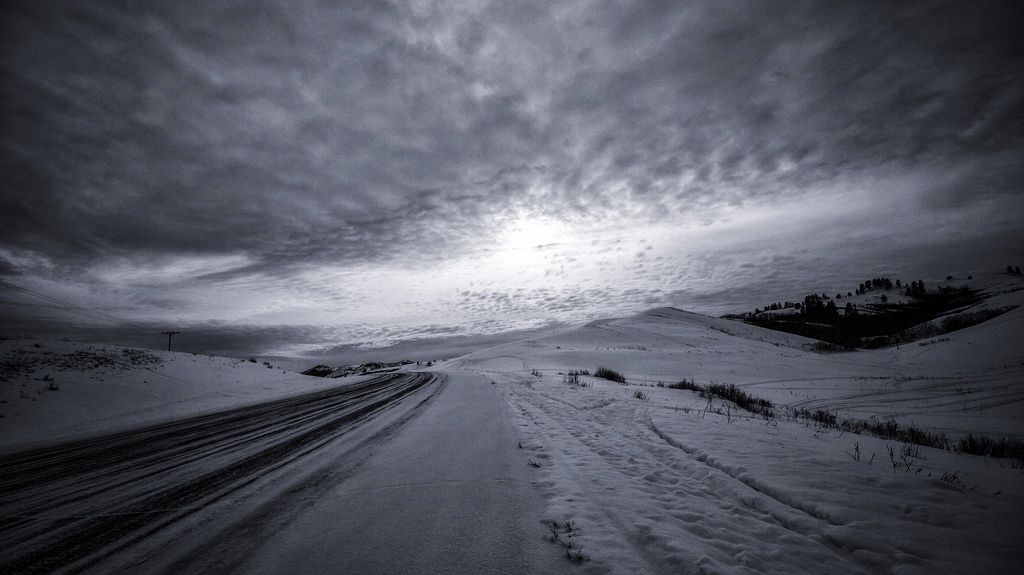 Having gotten the feeling back into his hands, Tony decided to risk a trip outside just to get another look.  The flurries of frightened snow continuously fled across his field of vision, but nothing short of a whiteout could erase this from his view.  He’d never even heard of anything like it.  Sure, he was in the middle of nowhere, but in North Dakota everywhere was nowhere, to some extent.

The ice-wall passively accepted his stare, as though apathetic or simply indifferent to its surroundings.  About ten feet high, it extended as far toward each horizon as Tony could see through the storm.  He had never been much further north than he was now, mostly because he figured the north pole would likely be the same as winters here, only all the time.  The object before him, however, if it could be called an object, fit his mental image of one of those massive ice-shelves in Iceland or Labrador, where there wasn’t any real land, just small continents of ice trespassing in the ocean.  When they’d been brought up in geology class, Tony had always pictured imposing ice-cliffs, hundreds of feet tall, surveying the surrounding ocean from its self-created crows-nest.

While his miniature ice-wall may not have stood a chance against the floating drifts in the Atlantic, it was rather impressive in BFE North Dakota.  The only reason he could possibly have missed it was the white-out that appeared a few minutes before he hit.  Immediately after the crash, he had hopped up on the badly bent metal of his hood to get a view of what was over the wall.  And the answer had been… more wall.  Just a ten-foot thick layer of ice as far north as he could see.  Of course, the snow could’ve been playing tricks on his eyes, but it certainly wasn’t playing any tricks on the American-made piece of steel he’d been driving.  Even a ’74 Plymouth wasn’t built to hit a solid piece of sheared-off ice-mountain doing 30.

Realizing that his hands were getting numb again, Tony retreated into the backseat of his truck and shuffled underneath the blanket.  Idly, he wondered what Cindy would have to say about this.  She probably wouldn’t believe him at first, just say he was trying to cover his ass for drunk driving.  There was really no way to prove he’d had the beer after the accident, but he figured that whoever picked him up could vouch for the existence of the ice-wall, which would likely be plenty enough to absolve him of any wrong-doing.

When daylight started to fade, Tony brought out his cell-phone to use as a make-shift flashlight, because he didn’t want to wear down the batteries on his good Maglite until he had to.  Surprisingly, he had one bar of reception, and it seemed to be staying.  Calling 411 to get the nearest tow company, he made extra sure they were coming from the south.

PREVIOUS: A GUIDE TO WINTER DRIVING – PART ONE