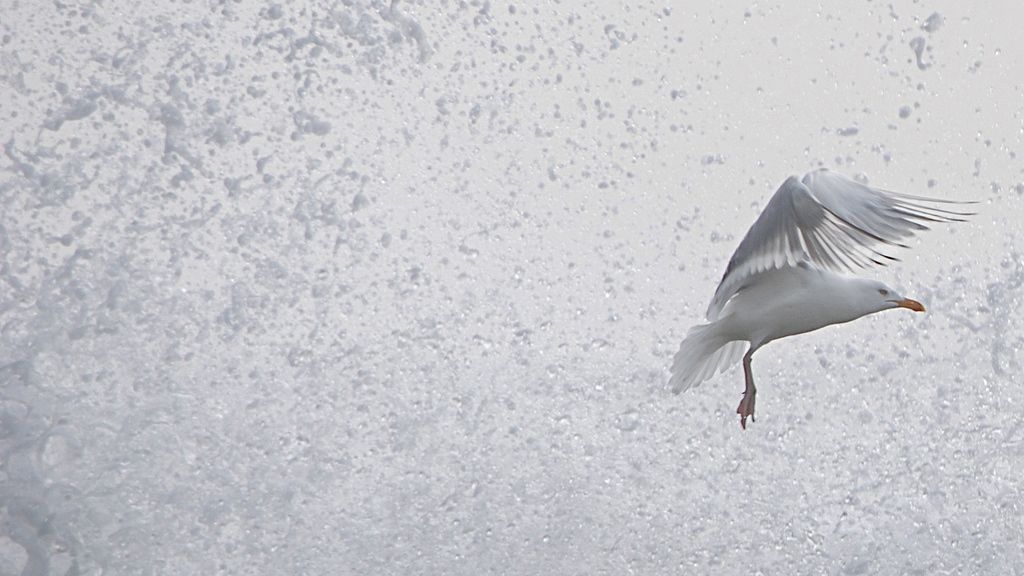 The Squirrel came out as a winner after the calamity with the arrogant lot of ducks. It won but it knew better than acting like it did. Previous experiences have taught it to suppress overly joyous and light-headed manifestations of a celebrating mind. It had one rule it believed had saved its life several times including this time. When it won, it acted like it lost, and when it lost, it acted like it won.

It ate the minimum of one celebratory acorn and nested itself in its dry burrow staring out at the sway of brunches that eventually put it to sleep. The Squirrel never slept well, especially after the accident with the Eagle. It was jittery and woke often. When it woke it was usually thirsty and it needed to piss. The Eagle had injured not only its leg and eye, but its inner mechanisms as well.

It was pitch black and the Squirrel knew better than climbing down. It relieved itself from its own high branch and climbed up to a cluster if dry leaves it knew collected rain water. It only sipped enough to wet its mouth because it knew it wasn’t really thirsty but only its mind was tricked to think so. Then it went back to rest.

The morning came earlier than normal. It was the edge of daybreak when an orchestra of a thousand thin, strangely, and menacing voices woke every creature before its time. More than one ugly curse was uttered under the nose of an annoyed animal deprived by a few extra minutes of sleep.

The orchestra was to be sure a drunk flock of crows. For crows were known to hang in the giant’s graveyards all day waiting for a mourner to leave a bottle of wine on the grave of their departed loved ones. That was what every animal thought before they open their eyes.

When they did open their eyes the picture was quite different. The flock was neatly organized in the shape of endless boomerang, something crows could never come up with. And these noisy birds were white. A migrating flock of seagulls; a sight only seen twice a year when they go south for the winter and back home for the summer. It was a clockwork omen that winter was coming.

As all the sleepy eyes, including the Squirrel’s, were gazing up at this air-show, a happening occurred. Suddenly the formation at the very front of the boomerang broke off and no less than three birds ganged on a single seagull with beaks and nails. As if all these early morning curses were manifesting themselves, the leading seagull was dethroned in midair and started free-falling to earth.

It was like an early morning theatrical performance of a Greek tragedy. The animals rubbed their eyes and looked up again. The Squirrel climbed to its observatory at the top of the tree and followed the action closely. The Seagull hit the branches of the great oak, which softened the blow, and after a few layers of slowing down it got wedged in a branch safely away from the ground. Lucky for it.

Because two foxes that observed the tragedy head out of their layer to hunt for the easy meal.

The Squirrel climbed down to the Seagull and watched it from a safe distance for a while. The bird was battered with a poked-out eye and a broken wing. But its legs and spirit were not broken. As soon as it saw the Squirrel it put a tremendous effort to get on its feet and manifest superiority.

The Squirrel knew that trick all too well but still took a step back. That is when the foxes arrived and visibly disappointed that their meal was not resting on the ground started circling the oak devising a way to get it down.

The Seagull was in visible pain and rested on the net of branches again. The Squirrel related to the wounded bird it ran to an dried up branch on the other side of the oak where it knew bugs lived under the bark. It collected a few and brought it to the bird.

The Seagull was very surprised but thankful. It gobbled them up very fast and dosed off. For the next few weeks the Squirrel repeated the same exercise until the seagull regained its strength and walked about the oak tree freely. It still couldn’t or wouldn’t fly but knew that day was coming.

The Squirrel got a un-animal like satisfaction from helping. Especially since it was the autumn and not food gathering, it had nothing better to do. And having nothing to do was the worst possible thing that could happen to an animal.

The Seagull thanked in any way possible since verbal communication was not an option. Then it took off. In the direction of where its flock disappeared. After many days of lonely flight it reached a small coastal town with steep rocky banks where the colony had settled.

It waited for night and climbed over the nest if each of mutiny partners, pushing a heavy rock over their heads and smashing them to bits. In the morning when the bodies were discovered the Seagull appeared in front of its flock and explain them its adventures with mild exaggerations.

Like killing two foxes upon landing and feeding on their corpses to regain its strength.