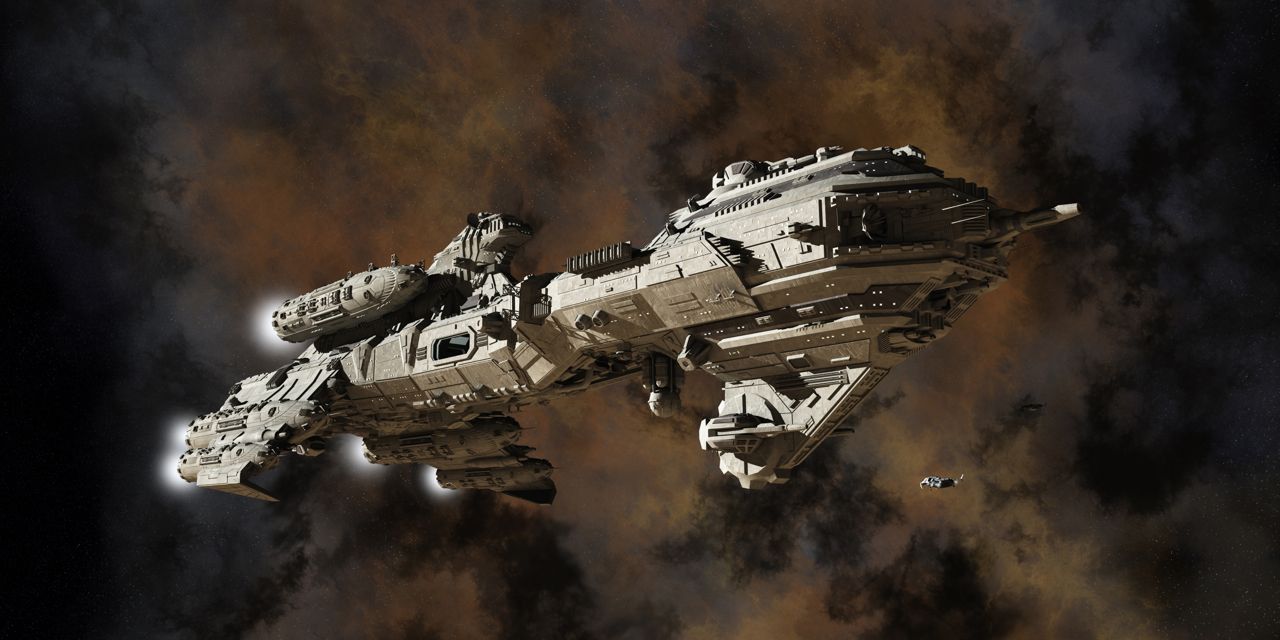 “What do you say, Sweets? Have you ever seen anything more beautiful than that?”

Jopp and Loi were gazing up at an Infinity Class UberHauler spacecraft. It was as tall as a two story building, and at least fifty yards in length. Light glinted off its dark blue finish.

“Wow,” was all Loi could come up with.

“Wow is right. You’re looking at the finest piece of transport tech in the known ‘verse.”

The sound of boots clopping on steel made them turn around to see the approaching Deck Chief, a middle-aged Tahl with pink stubble peppering his purple face. His head was buried in a data tablet.

“Which one of you is Transporter Wenslode,” he asked without looking up.

Jopp stepped forward, “That’d be me.”

“And who is this?” he asked, eyes still glued to the tablet.

Jopp waved Loi over, “This is my co-pilot.”

The Deck Chief finally looked away from his tablet and down at Jopp, “The manifest doesn’t state anything about a second pilot.”

“If you check my employment contract, it states I have the option of hiring my own co-pilot as long as the expense comes out of my fee.”

The Tahl made no effort to hide his annoyance as he tapped away on the tablet. His eyes scanned the display for a few moments, then looked skeptically from Jopp to Loi, “I’ll need to see some credentials.”

Jopp looked at Loi, and nodded his head. She stepped forward and held out an ID badge, which the Deck Chief swiped across the tablet screen. After what felt like hours, but was really just a few seconds, the data tablet flashed green. The Deck Chief handed back the badge, “Looks good. Let’s just go over the route specifications and you two can be on your way.”

Jopp mumbled under his breath, “Holy shit, it worked,” which prompted a quick kick in the leg from Loi.       “Ow!” he yelped.

The Deck Chief glanced up, “What was that?”

Jopp smiled wide, “Uh, I said HOW long is this run expected to take?”

“The estimated duration is twelve standard days. You’re going to take the Ked-22 anomaly, then cross the Dayukon system to the research facility on Epireon’s moon.”

“Great! And the cargo specs are?”

The Deck Chief ignored him, as his attention was back to his tablet.

“Well, I guess we better be going,” Jopp started to put his arm around Loi, but she swatted his hand away.

The Deck Chief looked up and eyed him skeptically, “Indeed.”

Loi smiled, “Thank you so much for your help.”

The Deck Chief nodded and silently walked away. When he was out of ear shot, Loi turned on Jopp, “I don’t know what’s more shocking… that this,” she held up the ID badge, “actually worked, or that you almost blew it with your big mouth.”

“How is that shocking? My big mouth always screws things up.”

She arched an eyebrow, “Fair point.”

Jopp started heading towards the ship’s boarding ramp, “Just be glad I had that extra set of creds.”

Loi followed, “Yeah, about that, why do you have a fake ID badge?”

“It’s a real badge. It’s just not mine. I forgot to renew my license one year, and I swiped that from this other pilot, Pliff. Then I just used a holo mixer to change the name and picture.”

“No, Pliff was the dick. He screwed me out of jobs for years. This was my little way of getting him back.”

They entered the ship’s central housing cabin. There were four beds, two couches, a table, and a large visual entertainment center. Jopp waved around the room with a flourish, “Welcome to our home for the next twelve days. C’mon, I’ll give you a quick tour before we take off.”

“This ship is gigantic. Don’t we leave in like twenty minutes?” Loi asked.

Jopp pointed towards a door behind her, “The cargo hold is through there. It makes up eighty percent of the rig. See, we’re already four-fifths done with the tour!”

Loi pointed, “What about those other two doors?”

“One leads to the engine hub,” Jopp gave a dismissive wave towards the other, “And we won’t be needing that one.”

“It’s the escape pod. You know, if something catastrophic happens and we have to abandon the cargo. It’s mainly for lesser-skilled pilots. I’ve never needed it.”

Loi clasped her hands and made a show of batting her eyelashes, “Oh my, how impressive!”

She giggled and worked her hand around his elbow, “My big brave transporter, take me to the stars.”

Author’s Note: Tnanks for reading! Jopp’s Folly is part of the “Space Tripping” universe. Keep a look out for the full “Space Tripping” novel in 2015. See you in two weeks for Part 7… The Finale!!!