For Tony, For The Man Who Gets To Stay 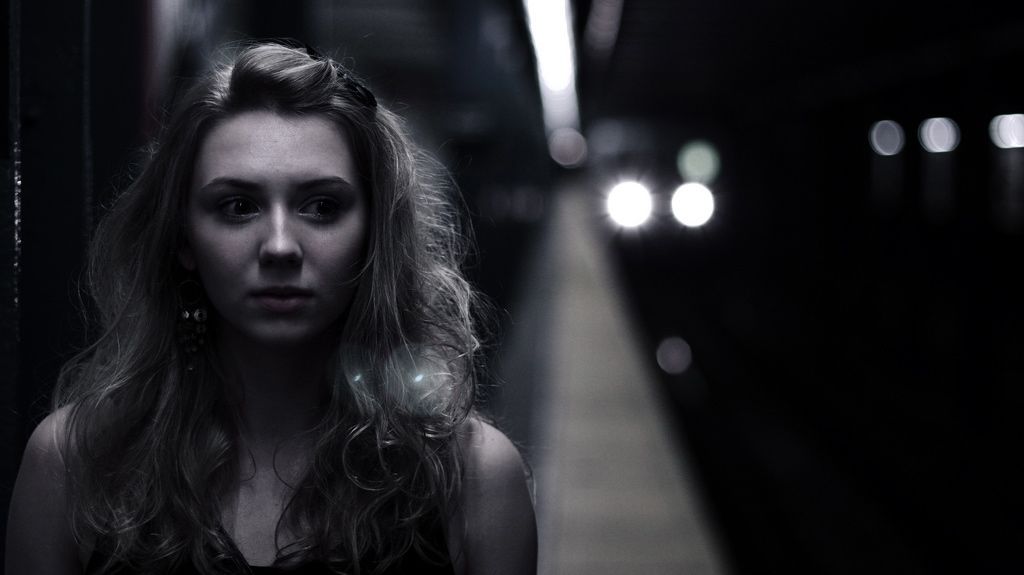 When I finally leave Mallory’s place, the second wave of the bar crowd is just getting home. They bubble up from the yawning mouths of subway stations and lurch indoors with their arms around each other, laughing. Their uneven gaits stand out against the stillness of the morning, like a photograph painted over with impressionist flourishes. When I move upstream between them I am slow and steady, and they slip around me without thinking, without seeing me. I am as much a part of the background as the light posts or the hydrants.

Down stairs and hallways, across the length of the platform, everything is concrete and steel and aluminum, cages and railings scattered about so that the whole place feels like a prison. It could be any station in Brooklyn: paint peeling on the benches, floor polka-dotted with ancient gum. Posters of beaming celebrities with the eyes and mouth stripped away. Withering old third-shift laborers with sad eyes and bad posture; restless kids with pastel hair, jostling each other recklessly at the yellow line.

I’m standing against a pillar, staring down at the third rail, waiting for the distant rumble of the A train to stir me from my mournful stupor, when this woman appears next to me. Older by several years, haggard and dazed as from a long night of work but not unattractive. Her shirt is sleeveless, the arms toned and smooth, and across her left shoulder, stark against her black skin, is the name Tony. In bold, flowing script, cardinal red, with a sinewy vine of rose thorns snaking through the bottom of the letters, wrapping itself around the base of the Y, curling through the elliptical center of the O.

I look at this name, and at her, and without warning I am struck by a strange and alien hope: that whoever Tony is he’s still around, that this name, forever etched into the body of a woman who has loved him, is not just a daily spur in her flesh, a reminder of a time in her life when burdens were shared, and every day was a new chance to inscribe some memory she could carry with her into old age. Maybe it’s only because I’ve just lost Mallory for good, and because losing her will soon transform New York from a vibrant wonderland into a cold and brutal tableau. But in this moment, for whatever reason, I want only the best for this stranger and Tony.

The train rumbles around the corner, pulls shrieking to a stop in front of us. Inside the car is frigid, even in midsummer. The woman and I sit on opposite sides, and I’m still watching the name, how the highlight from the fluorescents keeps jumping from character to character, how the thorns seem to ripple and glide so that it looks like they’re growing right there on the skin. Already, against my own inclination, I’m inventing a story for the two of them, how they came together and what they might have surmounted to stay that way:

They were young still when they met. Tony came to a party at her brother’s brownstone, in Sunset Park, or maybe Clinton Hill. It was a third-floor walkup in August, and in the flash of the strobe light the whole party was phosphorescent with sweat. She was supposed to go out with her friends, but she got sick, the flu or a stomach bug. Tony spent most of the night in her room, bringing her water, reading her Tweets from her friends while she turned her pillow over endlessly to the cool side. The party’s bass pulsed on without them just outside her door, the heartbeat of a world they had already, without quite knowing it, left behind. She wanted to kiss him, but she didn’t want him to catch it. He caught it anyway, far worse than she had; he was bedridden for days. When he was well again, he came back, and she kissed him then.

They didn’t get married for a long time, because marriage was something you did when you had the money to do it right, but she was in nursing school and he was trying to make the music thing work and the money stayed rooted to the horizon where it always had been. They had their moments when things seemed bright—a trip down to Baltimore to visit Tony’s mother, out to Queens to visit her cousins. Beyond the radius of their own home they felt unfettered, a part of the larger world. But always they came back to the old neighborhood, where they soon settled out like oil and water. She watched TV in the living room; he sat at the end of their bed and played his cornet.

On an unassuming Wednesday in the spring, Tony was hit by a cab as he biked to work. Suddenly there was tragedy in their lives, popped in like a lottery ball. He was bedridden for months; they were down to a single income, weighed by medical bills with more digits than they’d ever thought they’d see on paper. But over the weeks that she spent with him as he convalesced….

The train doors open, and this woman who loves Tony, who has irreversibly made him a part of herself, she gets off, disappears into the cold light of another anonymous platform. And it’s just me for the rest of the trip home, where I will fall into my mattress with all my clothes on and struggle into something not quite resembling sleep, only to wake four hours later and take the train back to work, where I will think about Tony, about the two of them, about the chance that he had to give someone a better life. And everything that I might have put into wishing to do that myself, I’ll offer it to him instead. I will hope that whatever chance he’s been given, he will take it, because the last refuge of the lonely man is to know that loneliness has its borders, that someone somewhere has settled in the lands beyond them, and that it is only a matter of so many more steps to get there.