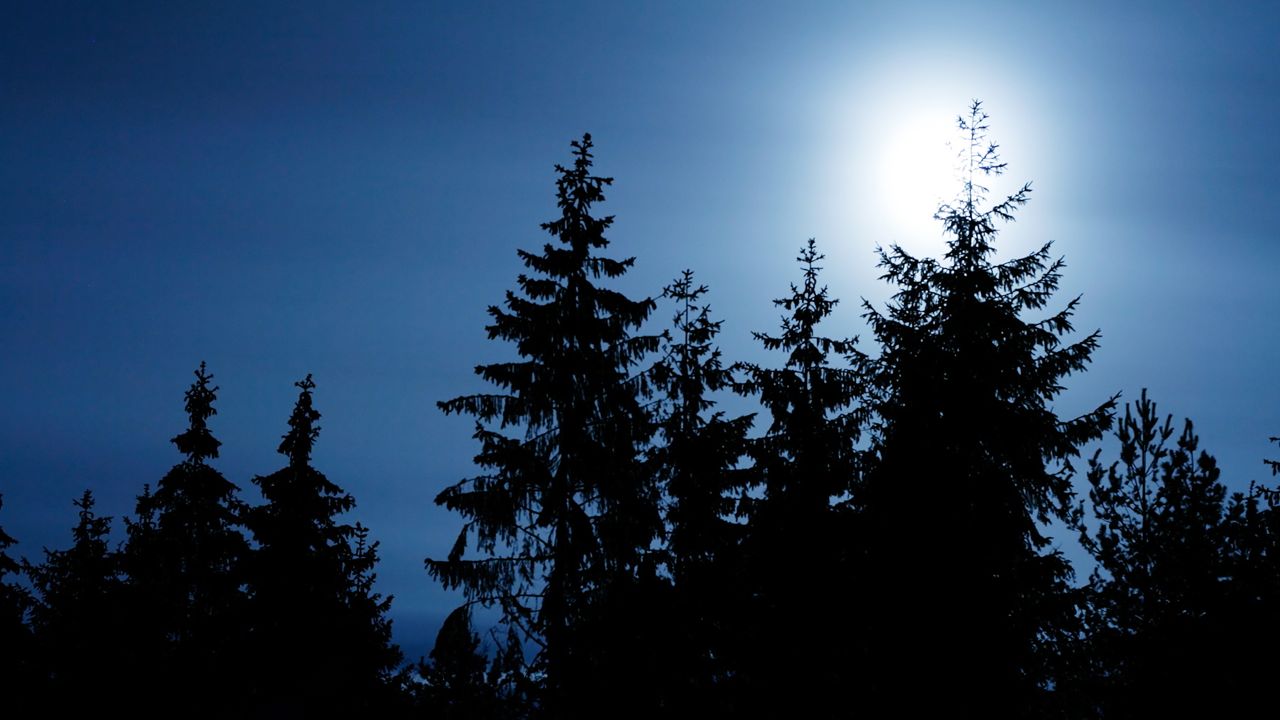 A moonless night in a forest of silence. Save for a single soul. A hunter stalking between the trees. When he moved he was nothing more than a shadow in the trees, his steps so soft that not a twig was snapped, nor a leaf rustled. For hours now, the only sound had been his breath, hushing in and out in the stillness.

A glimmer in the dirt. The hunter crouched to examine what he had found. An arrowhead, made of black stone and glittering like a meteorite in the near absence of starlight. It pointed deeper into the woods, away from the trails and hills that he knew so well. He stood and look around him. A gloom pervaded in the trees. A strange, grey light that wound around the trees and crawled along the ground. A breeze began to blow, pushing him towards the darkest part of the forest. Pulling him in the direction the arrow head points. He let it pull him, let himself be carried into a forest he did not know. He was conveyed by the wind and soon evaporated into the background of the night.

Half an hour of running went by, the wind insisting that he hurry, demanding that he follow. He stopped and cocked his head listening for a moment. Save for the wind, not a sound echoed through the trees. Even the familiar sounds of the nocturnal birds were gone. The air was cool against his skin and the silence made him believe he was in a holy place. He turned his head, looking back the way he had come. But before he could leave this place of spirits a gust of wind beckoned him forward. Onward he slipped, beckoned by forces beyond his ken.

The trees grew thicker here. They plunged up into the heavens, blocking the stars from his view. They grew taller too. The tops soared up until all the sky was canopy and the hunter could barely make out the leaves. The breeze twisted around and through him. A whisper that pulled at him, guiding him through the trees. His feet moved faster and faster still, until he was running through the forest, guided by a voice he could not hear. Branches whipped at his face, leaving unnoticed scratches and cuts on his face and body. He ran. He ran until all he knew was running. The woods around him almost seemed to part before him, opening into a new trail. All around him the forest swept by, the trees blending together into a single black mass as he ran.

The wind faded. A whisper, then a breath, and then nothing. The hunter slowed his pace, listening hard to the new absence of sound. There was a glow, up ahead, a light. He crouched down close to the ground, stalking towards the new sensation. He slinked cat-like across the forest floor. A thick bush blocked his path, but the source of the light was just beyond.

He brushed the tangled web of branches and leaves aside. Only the sound of a soft trickle of water reached his ears. He dug himself a small gap through which his eyes might see and dragged his body deeper into the bush, burying himself in a leafy cloak. And then his eyes saw, and could not look away.

The moon was bathing.

He looked out into a ring of trees surrounding an incline of pale white stone that dipped into a pool of water so clear and still the sky was reflected in its surface flawlessly. Up above the trees, stars were sprinkled across a bolt of deep blue velvet. But the moon was not in the heavens.

In the center was a woman, her skin a pearlescent white, dappled with shadow. She had a shock of short hair the color and brightness of fresh snow. She ducked down below the surface and the whole pool glowed with a soft, milky light. When she rose she was facing the hunter’s bush and he could see her eyes. Black and opalescent they were, dotted with splatters of violet. She smiled and laughed, a tinkling sound that rippled across the surface of the water.

She dipped her hands into the water and lifted them above her head to let the liquid cascade down her body in glittering strings of silk. Tiny waves rolled across the pool and the sky. The hunter’s breath stopped, his fingers froze, his body pressed into the earth. His veins full of stone, he froze, lost in the image of her.

Another cascade of water poured over her, droplets clinging to her flame of hair like tiny glass beads. Her body glittered in the light she emanated. The hunter drank in her every soft curve. Her breasts like two icy mountains. Her nipples a pale grey, small and round. Drops beaded up on them and she laughed again, brushing them off of her breasts and letting them fall to the surface like tiny diamonds.

She dipped below the surface again, a diffuse, white glow spreading across the circle. When she rose she was walking to the edge of the circle of trees.

A rock beneath the leaves, the hunter ached with his entire being to hold her in his arms. His head rang with thoughts. Did he dare reveal himself? Did he dare run to her? Once again he looked back, back through the trees towards a world he knew. He began to crawl backwards, content to have a story to tell.

The wind picked up again, pulling him up, whispering in his ear. Take her, the wind said. Make her yours. We guided you here, reveal yourself to her. His heartbeat quickened and he pushed aside the voices, but the wind was insistent. It tugged him up and up. He rose through the bush, breaking branches that sounded like canons in the trees. Still, the voice in the breeze whispered in his ear, catch her, take her, tempting him, tickling his heart. His desire to flee, to run to the safety of his home, ebbed and transformed into a feeling of lust for the moon.