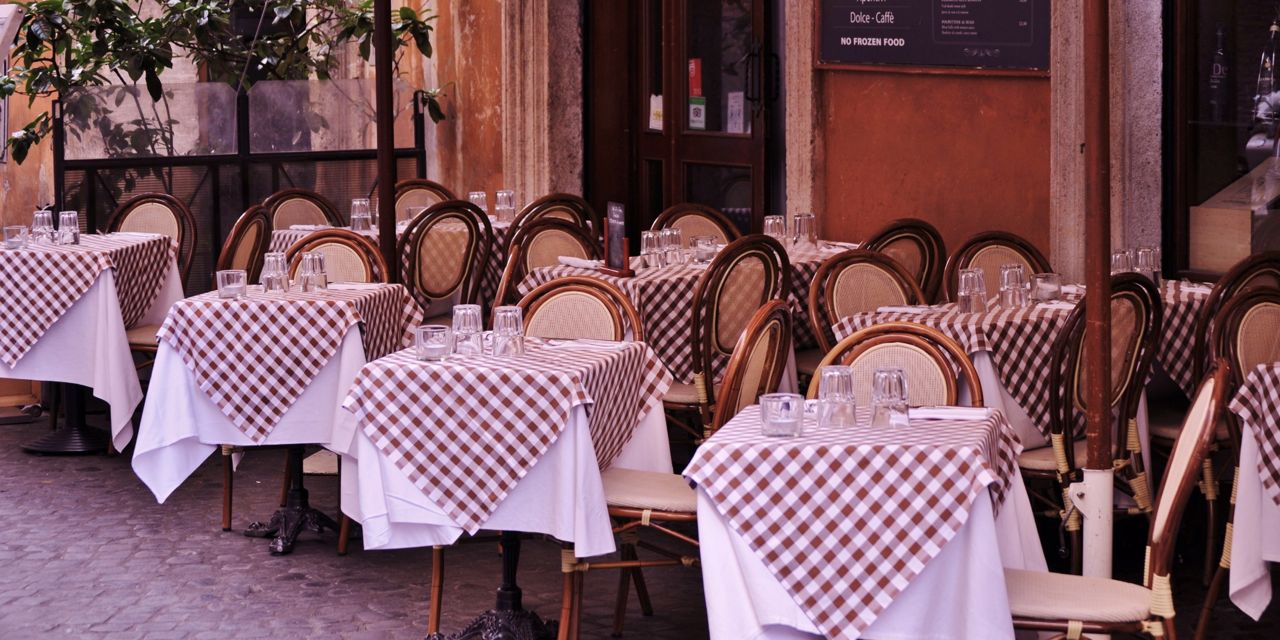 Grinning from ear to ear, Seth said, “Hi handsome,” and leaned in for a kiss.

There in that little restaurant waiting for him patiently was Philip.

Seth and Philip kissed passionately and deeply as if they were lovers for decades who hadn’t seen one another in a very long time. The two men stopped kissing, looked at each other, and hugged. Their embrace was quick but sweet.

Finally they sat down. Philip couldn’t stop smiling at his partner.

“We’re in the clear.” Seth answered.

“And you don’t think anyone suspects?”

The two were playing footsie under the table, and Philip had moved his hand under the table as well to rest it on Seth’s knee. He smiled again. But then a look of curiosity swept over his face.

“So everything will be pinned on Rita–er, I mean Sarah?”

Seth smiled upon seeing the grin return to Philip’s face. He reached his hand under the table to squeeze Philip’s hand.

“I love you,” Philip said, staring into Seth’s eyes.

“I love you too, Philip.” Seth replied back.

Seth was right. Everything did end up eventually getting pinned on Sarah. She denied ever killing Matt, despite it being her syringe found with her fingerprints all over it. She really had gone to the house with the intention of killing Matt. But in the end, it was Seth – who had known who she was since the very beginning– that had murdered his own partner.

He really did love Matt at a time. But that love faded away after he met Philip. While Matt was off teaching classes, Seth would often run to the city to pick up things that the pair needed for the house. By a strange coincidence, he ran into Philip while out with friends at a gay bar one night in St. Louis. Seth recognized him immediately from Matt’s yearbooks, told him who he was and that he was Matt’s husband, and thought it so oddly coincidental that he should find his husband’s straight high school crush in a gay bar. Philip was coming to terms with his own sexuality, and he and Seth hit it off immediately.

Eventually, an affair started between the two men. Seth wanted to leave Matt, but didn’t have the money or resources. Initially, he hadn’t planned on killing Matt. The plan was to sit back and watch Sarah become the undoing of all of them. She was so crazy and so delusional that he wasn’t sure she would actually go through with it in the end. She certainly wasn’t able to finish Paul off on her own.

That first night at the house when everyone showed up, Paul had known something was off. He was an analytical mind who eventually figured out that Rita was not Rita. He went up to her room that night, having figured it all out. At first, she let him leave her room with the realization that she really was Sarah. But she figured out that she couldn’t let him live knowing what he knew if her plan of killing Matt to obtain the house and get her revenge was to work.

Seth watched all of this from his partially cracked open bedroom door. He saw her sneak over to Paul’s room while Matt was downstairs cooking breakfast, candlestick in hand, ready to snuff Paul out. But when Seth went to check on his body later, he realized Sarah was so crazy that she hadn’t even finished the job: Paul was still breathing. She hadn’t originally planned on killing him and thought she only had enough morphine to kill Matt. To give herself an alibi, Sarah as Rita had hurried downstairs to join the breakfast party.

What had Paul known that had tipped him off to Sarah’s real identity? Paul, for some reason, savored a memory that he had of Rita tracing all the way back twenty-one years. To pay for their prom, the junior high school class of Sedville High School always held an annual ice cream social as a fundraiser. As class secretary, Rita was required to attend, despite the fact that she was diabetic and couldn’t partake in any of the sweets. Paul, also being a geeky person as a teenager, sat alone with Rita and refused to eat any of the sweets in solidarity with the girl he had a crush on. She couldn’t eat sweets due to illness and he wanted to support her. So the second that Sarah as Rita not only accepted but ate the cookies that Seth made at the reunion committee week, Paul knew something was amiss. Something not even a good con woman like Sarah had become could know about.

Shortly before bed that night, Seth overheard Paul approach Rita and question her identity, telling her that he was going to expose her as an imposter the following morning. He wasn’t sure who she was, but he knew that she was certainly not Dr. Rita Chastain. Though he had no idea that it was really Sarah, Matt’s wife who had vanished, he had planned to get to the bottom of Sarah’s deceit. Little did he know, Paul wouldn’t survive the night to ever bring the truth to the light of day.

Sneaking into her room, Seth stole one of her syringes, and with gloved hands, he poked into Paul’s room yet again to kill him. Seth, too needed Paul dead: if he exposed Sarah as Rita to everyone, Matt would know and then he and Seth’s marriage would be invalidated. Seth would get nothing out of the estate after the event of Matt’s death had this happened. He quickly injected Paul with a lethal dosage and then sneakily crept back into Sarah/Rita’s room to replace the murder weapon. No one ever thought to look for a secondary item that actually killed him.

The next night, Sarah as Dr. Rita snuck into Matt’s room while Seth was in the shower. She used another syringe full of morphine and stabbed him with it in the shoulder.His original plan was to let her murder Matt, then expose her as the killer. This would invalidate her case for the inheritance. Matt had already changed his will twice since Sarah’s disappearance, and the latter two times gave Seth everything. All he had to do was wait. Sarah presented the solution to him on a silver platter. She would think she murdered Matt without having actually realized that she didn’t kill him. By badgering her at the end, a confession out of Sarah was almost certain. With  her confession, her fingerprints on the murder weapons, the idea that she was the killer, and a room full of witnesses who all heard her admit to her crimes, Sarah was probably about to go to jail for a very long time.

He and Philip had worked out that they could not only convince the party that they didn’t know one another and soon hated each other, but that they could eventually badger a confession out of Rita/Sarah. The two deliberately picked fights with each other and Holly to fuel that fire. In fact, nearly everything, from the fights to the timing of everything had been an insane plan that Seth had executed flawlessly. The weather had been his greatest ally, and surely he wouldn’t have been as successful as he was without the aid of the flooding that prevent everyone from leaving or the police coming to investigate too early.

The sun was shining bright and high in the sky that day, and as the two men left the diner, both had to put their sunglasses on to be able to see. When they reached their cars, Seth glanced over at Philip who smiled back adoringly at his lover. Seth didn’t return a grin in return, however. Seth walked over to Philip’s car and moved directly in front of him. Lifting the shades from his eyes, he looked sternly at Philip and asked:

“You remember how the police never found the murder weapon that killed Paul?”

Taken aback, Philip also lifted the sunglasses from his nose and placed them on his head so that he could look at Seth in the eyes.

“What’re you bringing up that for?” He asked Seth.

Seth wasn’t budging and hadn’t blinked once after staring into Philip’s eyes for more than a minute. He asked again:

“Do you remember how the police never found the murder weapon that killed Paul?”

“Because I love you.” Seth answered back quickly.

“Because you love me? What the hell does that have to do with the candlestick?” Philip asked. He was obviously getting very agitated.

Seth explained: “I asked you if you remembered that the police never found the murder weapon because I wanted to remind you that the candlestick went missing. Well, it never went missing. I have it.”

“Seth,” Philip was worried, “What are you going on about? What is this?”

“This is me telling you I love you. That I possibly want to spend the rest of my life with you.”

“OK…” Philip didn’t know what else to say.

“But,” Seth said, “If we are ever to really, truly be together, then I need to know that we will both be secure.”

Philip’s face turned white. He was to be scared.

“And the only way we will ever be secure in our love is if I know that there is no way either of us will betray the other. I love you, so I have taken the candlestick and hidden it away someplace only I know about. Where it will stay hidden forever, if we are both lucky enough to spend eternity together!”

Philip just stood there shaking his head in confusement. He was speechless.

Seth inched so close to Philip’s face that he thought his partner was either going to bite his face or kiss him in the parking lot. Seth concluded:

“I just didn’t want there to be any confusion. You see, you know that I have fought and I have done terrible things for our love. Stolen and killed and conspired to be with you so we can build this beautiful life together. You are the only person who knows the truth. And so I have done everything I can do to protect that truth. Now you will, too!” Seth lightly tapped the palm of his right hand against Philip’s cheek and finished by saying:

“Just in case you and I ever decide to go our own separate ways and you feel bad or weird about the way things end up, just remember that I have that candlestick. I’ve got the murder weapon that killed Paul. Thanks to my quick thinking and ordering Matt to hand it to you, his and yours are the only fingerprints on it the candlestick. Don’t ever forget that.”

Philip was frozen in place. He couldn’t move. In total shock, he knew he was sentenced to silence about the incidents that had happened over the reunion planning week at Matt and Seth’s house.

Seth smiled at him in a sincere and earnest way: “Now, I will see you back in Los Angeles. I don’t see any reason why we would ever need to have this conversation again. Have a safe flight babe. Love you.”

Seth put the sunglasses back onto his nose, walked around Philip’s car, got into his new Porsche, closed the door, and adjusted the rearview mirror. Admiring his handiwork, he smiled at his reflection and then turned to fasten his seatbelt. He started the car, steared it out of the parking lot, onto the main road out of town, and drove off into the sunset.