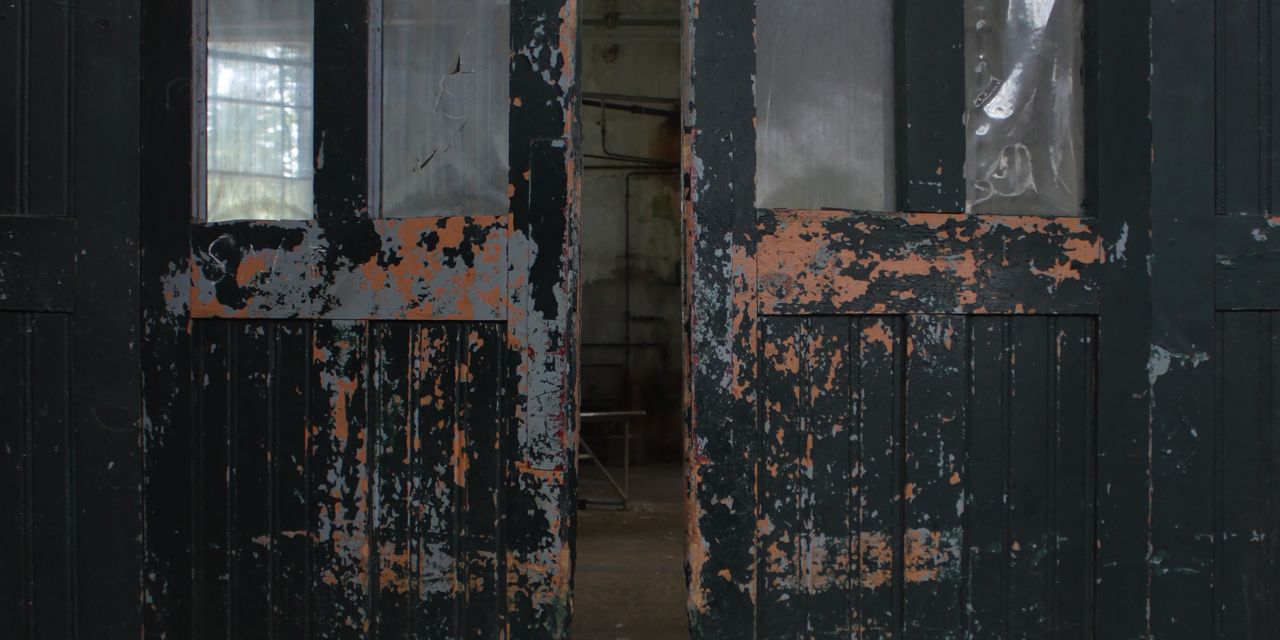 The factory doors were thick, gray slabs of metal left wide open. The hallway inside led into near blackness. Broken shards of the ceiling hung down like fangs. Jennifer paused and picked up a big rock. Before entering, she bounced it in her hand for a moment before replacing it with a bigger, pointer rock.

The musty air of the hallway engulfed her, made her feel like she was being swallowed. The despite the open doors behind her, the interior of the factory was completely insulated. From a single step through the doorway, the sound coming from the wilderness was cut off within a second. A low, dull drone seemed to blanket the silence. Loud, but muffled, thumping sounds sometimes pierced the monotony. Sometimes, Jennifer could hear sounds that came from human mouths. Not screams or groans or moans, just erratic, singular noises, like the beginnings of words that were suddenly cut off. While she couldn’t pinpoint exactly their source, Jennifer noted that all the sounds came from the same direction: forward.

Her eyelids were ratcheted open, rubbed red and stinging from the amount of dust in the air. Even blinking left her defenseless for too long. Every muscle in her body was flexed and tight. She would have been shaking if her body hadn’t been locked together in tension. For the sixth time, Jennifer shook her head to get hair out of her face. Setting the rock against her foot, so she could feel it in the dark, she reached into her pocket, retrieving her hair band with her necklace, yet again, entwined around it. Untangling the two in the dark, she decided to put them both on. The ankh sat warm against her chest. She breathed deeply, tucking it underneath her shirt. The comfort it gave was slight, but it was appreciated.

Jennifer looked up to watch a figure round a corner at the end of the hall. Forgetting completely about her rock, she bit her tongue and flattened herself against the wall. In the dark, the silhouette was little more than a vague shape, its human qualities only implied. Its head and shoulders were the only parts clearly defined against the wall behind it. They were canted to its right side, as if it were limping heavily. The shape stopped, only for a moment, before turning back the way it came, as if it had forgotten something. As it left, its right arm became more defined. It trailed behind the rest of the body and longer than it should have been. Instead of a hand, its wrist was bound to something very, very heavy that the figure was forced to drag across the old wood.

She waited while listening to the scrapes and footsteps fade back into the building’s far-away chatter. Releasing a long-held breath, she stooped to pick up her rock again, but found that she had kicked it into the doorway of an open office to her left. Picking it up, she surveyed the interior. A hole near the top of one of the windows let in a narrow beam of light. Only a desk with no chair remained in the gutted office. The odd scrap of paper still stuck to the wall and a torn bulletin board faced her on the opposite wall. Jennifer was about to turn away before she glimpsed another figure in the corner.

Yet another body, half-invisible in the darkness, lay slumped in the corner. It was only by chance that she even noticed it; she was fully prepared to walk by the open doorway without a second thought. How many corpses littered the factory, tucked away in its shady edges? How many had she already passed on the way inside. She stood quietly pondering until the corpse flicked its gaze toward her, its eyes glowing like a cats. Until the corpse blinked. Her knuckles whitened around the rock in her hand as she turned and strode off, practically smashing through the debris compared to the sneaking she’d done minutes before.

Jennifer reached the end of the hallway without incidents, keeping her face averted from any open doors or darkened crannies. In a rare stroke of luck, her foot stumbled across an old, slightly bent section of rebar that had come from a crushed section of wall. Setting aside her rock, she hefted the bar and gripped it tightly in her hand. It was light enough to swing, but solid enough to actually use more than once. She spun it once and let a smile flicker to life. She glanced over her shoulder and frowned again.

“Congratulations,” she muttered quietly to herself, “you went twenty feet.” While the entry hallways seemed dark and constricting, the factory itself was enormous on the outside. For all Jennifer knew, Alex could have camped out on the roof or buried in a sub-basement. Finding him could easily take hours, and she was not prepared to stay in Hell for that long.

“One advantage,” Jennifer began, but was quickly silenced to heavy thud, too close for comfort. She took a right at the hallway, away from the sound, and began to think quietly instead of out loud.

She adjusted her grip on the rebar and crept through the debris with renewed speed to match her resolve. Her eyes had begun to adjust to the darkness. For a while, it was necessary for Jennifer to poke through the hallway with her weapon in order to check that the way was clear. After an estimated fifteen minutes, her vision had improved enough to keep her from running into any of the bigger obstacles that littered the halls.

With low visibility, navigating the building was like an ant navigating a bee hive. Jennifer could only use vague place markers, like a broken door of a flipped desk, to make sure she wasn’t running in circles. For longer than she wanted to admit, she had rounded the same section of hallways nearly five times, always running into the same dirty plunger at the end. Until she explicitly found the plunger, turned around, and walked in the opposite direction, she was a prisoner to its labyrinthine. She turned corners, entered rooms, and investigated new hallways without incident, mostly because she hadn’t been looking for them. More than a few times, Jennifer ducked behind a doorway or around a corner until passing footsteps faded away. As much as her curiosity wanted her to, she never brought herself to look at what she was hiding from.

next: Cupcakes and Fingernails – Part Fifteen

all chapter: Cupcakes and Fingernails