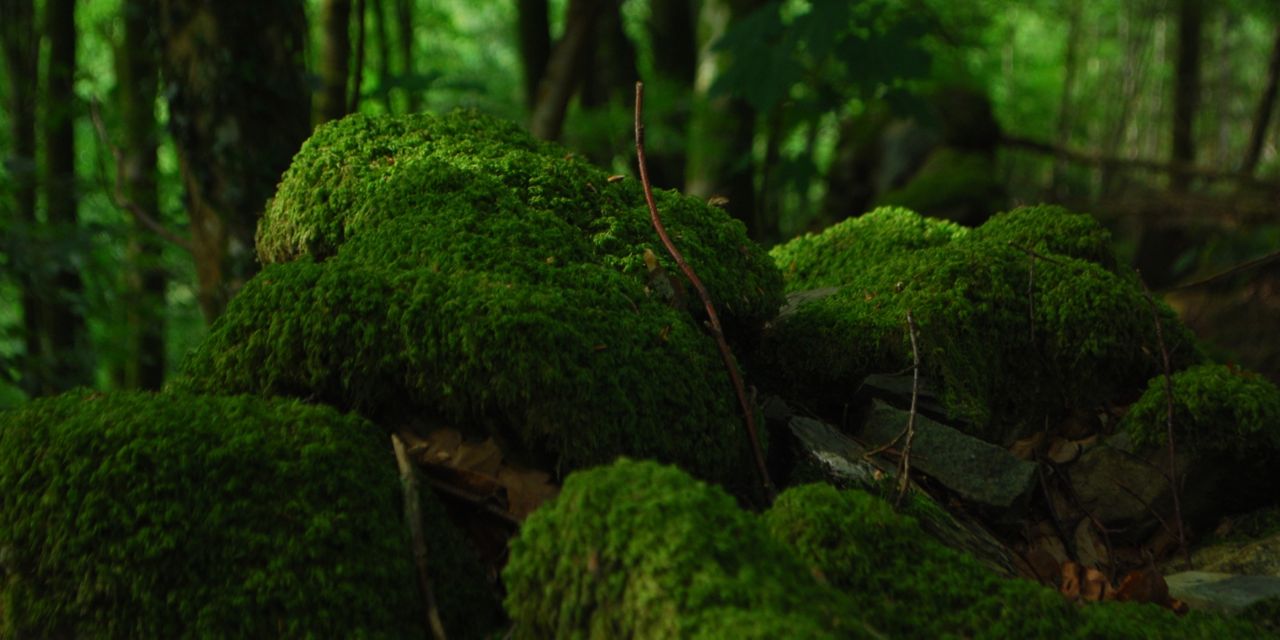 It went on like this for some time. The boy came into the forest each moon and collected the fruit in his basket. Each time the fright eased out of his spine. He stood to his full height and no longer peered over his shoulder. He waited patiently for the trees to spring up, usually one of two a moon, sometimes more.

While he waited, he liked to run, to climb the trees, to whip the branches through the air. He was good at his job, much better than the birds who were tasked with it before him. They used to swoop down into the leaves, whispering all the way. They would tear the fruit from the trees with their beaks, ripping the flesh and staining their paper feathers red, making a real mess of things. They worked for the queen, her affectionate pets and the only songs they sung were whispered last words of humans.

One moon, I watched the boy come upon the tree that had birthed him. He pressed his hand to the wood, marveling at the garish scar he had made in the bark when clawing his way out. Another tree began to push through the soil behind him and he readied his basket, refocusing upon the task at hand.

The new tree grew and blossomed like all the others, but when the fruit dropped, it looked strange. It was still red and slippery, it still reeked that foul stench that was sickly sweet in my nose, only this fruit was glowing. It shown with a small light at the center of it. The boy carefully pulled it off the branch and cradled it in his hands. It cast a faint red glow over his face and I struggled to remain hidden. I wanted to admire it as well.

He stood for some time with the beautiful fruit in his hand until the tree began to creak then he scrambled to find a place to conceal himself. The human who would soon emerge was not allowed to see him, at least that’s what I assume the queen told him. He crawled behind the rocks that I too, was utilizing as a hiding spot, but I did not run. I longed for a peek at the odd fruit.

The boy gasped when he saw me and held the glowing fruit tight to his chest as if I would tear at it like those birds, as if I was just some creature who didn’t understand beautiful things.

“Quiet, you fool.” I hissed and we turned our attention back to the tree.

The human within did not kick and scratch her way out. Instead, the bark simply split open like a neat seam and she dropped softly into the soil like a petal dropped from a flower.

I had never seen anything like it before. All the humans before her had violently broken free of their trees. Why was this one spared the pain, the confusion? The boy put his basket on the ground and carefully dropped the strange fruit inside.

“Please don’t take this,” he said, quietly to me.

I nodded. I didn’t much like taking orders from humans, but if he left it with me I could get a better look at it. The boy stood from our hiding place and walked to the the girl. He scooped her up in his lap and she blinked her eyes open as if she were simply waking from a dream. They spoke softly and I didn’t bother to listen. Studying the iridescent fruit was a far better use of my time.

The small light inside it flickered and changed like a tiny flame, but it never stopped glowing. I wanted it for my den, to place by my head while I slept, to throw a soft red glow over my little home, but even I have lines I will not cross. I would not steal from the boy. I would have traded valuable information for it, but something told me he would not let go of this treasure, even to his queen. The boy had been doing his job long enough to spot rarity. He knew what he had.

I watched the boy and girl hold each other well into the night. She nodded when he told her he would return the next moon. He let her go and dashed back to the rocks. He looked surprised to see me still there, guarding his basket. That was one thing I truly liked about humans. Some of them were smart enough to expect betrayal. It was a survival instinct none of the beasts in this forest possessed. None, but me.

“Thank you,” he whispered.

“What’s your plan, fool?” I asked, recognizing the look on his face.

I had seen the humans wear it as they walked through the gardens by the palace. His eyes were twinkling like the sapphires in my den. He shook his head, the girl’s fruit glowing on our faces.

“I don’t know. I suppose it would be too much to ask you to watch over her until I return.”

I turned to the girl. She was curling up on her side, tired from the ordeal. Her hand was absently stroking the bark of her tree.

“But I will do it so long as you bring me a piece of yellow cake from the castle.”

He took the fruit and scurried out of the woods and I watched over the girl as she slept. I walked up close to her, sniffed her tree, sniffed her hair. There didn’t seem to be anything unusual about her. I couldn’t understand what made her special and I didn’t like it. It was my business to know.

The boy kept his word. Every morning he returned with pocketfuls of cake for me. He brought her clothes and blankets and food and I watched them fall in love over many moons. They spoke in the meadow, kissed in the trees, made love in the lake.

“What are you thinking, fool?” I asked him one night as I walked him to the edge of the forest.

I knew fully well he used to be called Otto, but I liked fool better. It was more accurate a name.

“You’re just going to keep bringing her food and spending your days with her and keeping her from the queen? Do you not expect to be caught? What do you think she’ll do with you once she knows you’ve been holding out on her, especially with such a gem?” The boy shrugged, his eyes still shining with hope.

“Perhaps she will be understanding. She has been so kind to me. To all of us.”

“If you really believed that I wonder why you hid her in the first place.” he rolled his eyes and clucked his tongue.

“You always presume to know everyone’s motives and intentions so well, Ember,” he teased me, as if we were old friends.

Maybe that’s what we had become. Maybe I had gone soft. I allowed him to call me Ember without spitting fire at him and in return he let me call him fool. Was that friendship? Responding to someone else’s call, whatever it might be?

“That’s because human nature is an ever repeating pattern. If one watches long enough, fool, it is all to easy to predict. Even your queen.”

He stopped abruptly. “The Queen is human?”

I scoffed. “She certainly doesn’t look it does she?”

He squatted before me, eager. “Tell me her story, Ember.”

“Psh, you will never be able afford it, fool.”

He looked disappointed, but didn’t question me. We made it to the forest’s edge and before he stepped out onto the grass I put a paw on his foot. It left a little singe mark but he didn’t wince. He was used to my fiery disposition by then.

“I can sense you don’t trust the queen, deep inside you feel danger just like any animal does when they are being hunted. It is instinct. It could not be bread out of you humans. If you love your girl, do not let her be discovered by that witch.”

“How could you say something like that of our queen, Ember?” He asked, but his voice was more curious than accusing. He knew I was right.