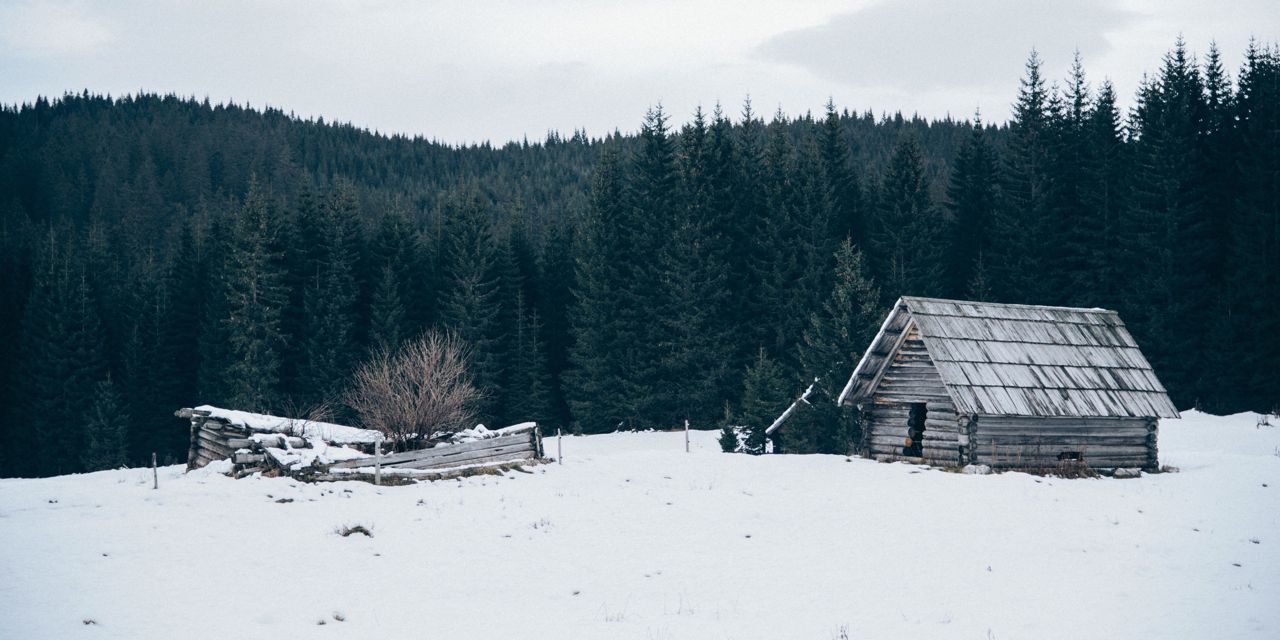 THE  TIME I GOT SNOWED IN

Now, I seen a lot o’ snow o’er the years. In fact, I can’t bring meself to remember e’en one single winter in me belov’d Green Mountains o’ Vermont in which there wasn’t a flake o’ snow. Many a winter I’ve sat close ta the fire, wit’ me old man ‘n me siblin’s, and stayed nice ‘n warm ‘n cozy.  But o’ course, some winter’s ‘r heavier ‘n others, and bring more snow along wit’ ‘em. One such winter sticks in me mind, like the frost stickin’ to the mornin’ woods.

I was a child, ‘bout this time o’ me life, and hadn’t ne’er felt a chill such as that winter brought in all me days. There weren’t enough blankets round the house fer the lot of us, me ma, me pa, me sister, ‘n me brother, ‘n we had a lot o’ blankets, we did. E’en huddlin’ round the fire didn’t do us no good, the cold kept creepin’ in, lookin’ ta take us all ta the grave. Me pa wanted ta go ‘n fetch us some more blankets from town, but ma didn’t let him. We was too far up in the mountains, ye see,  ‘n it was already too dark out fer me pa to make it down the mountain to town. Our cabin lay pretty far up the southern side o’ the Green Mountain, ‘bout 9 miles out o’ town, so as ta ensure our seclusion. It was a blessin’ during the summer, spring, n’ fall, but almost secur’d our doom that winter, I tell ye.

Anyhow, me pa couldn’t get us no more blankets, nor any o’er sort o’ supplies we may’ve needed that night, though we had good stocks o’ firewood, liquor, ‘n smoked bear at least. All we could do was huddle round the fire, hopin’ we would make it through ‘til mornin’, when me pa could venture out ta town. Outside the windows we could see the snow comin’ down like ne’er before, thick wave after wave o’ white powders and icy flakes that would send shivers down the spines o’ the furriest bears o’ the mountain. It didn’t stop fer one second all that long night.

Eventually we all dozed off, and lo-and-behold, when we all woke up in the mornin’ we were still alive, though our limbs were frozen like the branches of a tree. That didn’t stop us from celebratin’ with a few gunshots and a drink er two o’ hard whiskey. After our cheers faded, we decided ta head down inta town fer those blankets ‘n other supplies, as to outlive the cold o’ the comin’ nights ahead. I was always a young ‘un who enjoyed a toss in the snow, so o’ course I wanted ta help me old man venture on down ta town, but the snows were already too high fer a boy such as meself, so me pa left out inta the cold all by his lonesome. Meself, I kept me poor ma company as she worried all the day long ‘bout me pa’s return.

Well, the snow didn’t have no plans o’ stoppin’, e’en though me pa was gone ‘n out o’ the house. Already more ‘n a few feet high, the damned powder kept it’s wild sprinklin’ all the day through. I watched out the window in wonder, as I’d ne’er seen the likes o’ such a blizzard befo’, ‘nd neither had me brother, who watched the snow by me side. By the time night fell again, ye couldn’t open the door outwards, as snow had piled up 8 feet, er a height such like that, which was up ‘n o’er the height o’ the door! We hoped ‘nd prayed pa had made it ta town, fer he wouldn’t have made it out in the woods in the snow. It did bring a fair bit o’ insulation however, makin’ the night a bit more bearable fer us than the night befo’.

Trapped like animals, we were. We waited out the snow fer days, I tell ye, hopin’ me pa would return quick as God allowed it. We ran out o’ water pretty quick while he was away, so I was in charge o’ resupplyin’ us on that front. It’s a bit o’ a trick to milk that snow fer water, e’en though snows made o’ the stuff. The thing is, ye see, ye can’t just eat er drink snow. It ends up makin’ ye thirstier than ye were before, sure enough. It’s real funny, when ye think about it. Anyhow, the trick ‘s ta melt the snow before ye eat it. It can be a tiresome process indeed. I had ta wrestle chunks  o’ snow from the block that had built up outside me house, ‘n then melt it down o’er the fire in a big pot. Then ye had to catch the water in jars er such, so ye could drink it. That’s how we survived without our usual stream water fer the time being, such as it were.

Pa eventually returned in a week er so, once the snows had melted down a fair way, though he most forgot any supplies other than some more liquor, which we already had aplenty of.  It all worked out fer the best anyhow, as I learned a few tricks ‘bout the snow, and there weren’t no people frozen ta death er nothin’, though me brother came close. Anyhow, that the tale o’ how I got meself snowed in by mother nature one freezin’ winter, and how I’ll ne’er forget it.